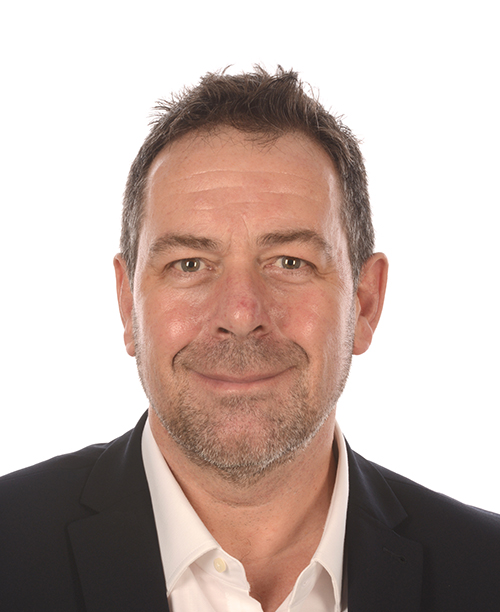 Our new interim Chief Executive, Tony Chambers, joined us this week. Having started out a nurse, Tony has spent several decades in the NHS, mainly in the north west of the country. So, as he joins us down south, we sat him down to find out the important facts - why our Trust? What were his first impressions? And, of course, does he have any pets….?

Lives: In Bolton with wife Alison, 55. Tony will be based in Romford during the week, returning home at weekends. He and Alison have two sons, Daniel, 30, 25-year-old William and a grandson, Jacob, who just turned one.

And: Tony was almost lost to the NHS when he considered a more glamorous career as a travel writer.

I started out as a nurse on a critical care unit. My mum was a nurse, so I think that inspired me. I trained at the Bolton School of Nursing, and my first job was at Bolton Hospital.

It was very intense working in critical care; I enjoyed getting to know my patients and their families and I was there for three years.

After that I decided to go back to university to do an English and communications degree at Coventry. I was interested in travel and writing so thought I might be a travel writer. It was during my course that I did a work placement in the press office of the North West Regional Health Authority, which gave me a really different perspective on the NHS. It was like looking at it through a different lens and it was where my interest in NHS leadership came from.

I realised there was so much variety in the NHS and that my role as a nurse meant I could help my patients individually, whereas in strategic leadership I could influence whole populations.

So, after I finished my degree, I went back to Bolton Hospital as a bed manager. It’s one of the most operational roles there is, you really see the hospital warts and all, in and out of hours. As my first management role it gave me a great foundation. I’m in awe of others who do it; it’s hugely important and can be relentless.

After that I did various operational management roles across Greater Manchester and Merseyside. I also had a national role on the NHS’s Modernisation Agency in 2002, which meant I spent a lot of time in and around London.

I’ve also carried out various executive director roles and worked in a large integrated health board in Wales. My first role as Chief Executive was in 2012 at Chester. Before joining our Trust, I was leading a strategic programme for Salford and Greater Manchester.

Since the beginning, I’ve found the NHS interesting, exciting and frustrating in equal measure, and that hasn’t changed! I think having started out as a nurse giving direct care to patients has given me a good grounding.

We have a privileged role as care providers because we are there for people when they are at their most vulnerable, as well as when they are most elated, like when a new baby is born.

Why the move down south to our Trust?

Having had a long and varied career in the NHS, I’ve made lots of friends, including Sir David Sloman, the NHS Regional Director for London. He’s been trying to persuade me to come and work in London for a number of years, and I saw this as an opportunity to do something different.

I knew there were challenges. For those not close to it, you only know the Trust by what you hear or read. I’ve found it to be an organisation full of opportunities, where systems are beginning to work together in a more purposeful way.

I’ve found you all (the staff) to be incredibly proud of what you do. Everyone I’ve met has been bright-eyed with the right focus and values. I’ve also been incredibly impressed by your professionalism and commitment.

I’ve joined during what it traditionally the busiest time for the NHS, and that can really give a flavour of how people cope under pressure. I’ve seen a very supportive environment.

While it’s early days yet, what are your plans for our Trust?

I want to build on the excellent work of Chris and the team, not lay a whole new track. I want to get a better understanding of our Trust so I can work with teams to more reliably deliver things which have been difficult. I don’t want us to be doing ten things at once; I want us to really focus on three or four big ticket items. I am keen that our senior managers empower everybody to make the changes that need to be made.

One of those areas is likely to be our performance against the four-hour standard. Long delays in A&E are in no one’s best interests and I think the experience of care could be better for our patients.

To do that, we need to look at how we make a better working environment for our staff. It’s a simple formula, happy and engaged staff can deliver a more positive experience for our patients. That’s why I also plan to focus on a culture of openness, safety, and respect.

For now, I want to meet you and listen to you, to understand who’s who and what’s what.

I’ve already been impressed by the home first focus - getting people home as quickly as possible following an admission. It’s right for our patients and it’s right for our hospitals. It’s been great to see that we’re focused on avoiding long hospital stays, particularly as we know what a negative impact these can have on our patients, particularly the elderly and vulnerable.

What do you like getting up to outside work?

I like walking the dog. I’m also a wannabe ski god – I love skiing! My son Daniel is a professional snowboarder who trains the British snowboard cross team, based in Austria. As a skier, I don’t approve of snowboarding, however, as a dad, I’m very proud!

I also like to travel, and I enjoy whiskey …in moderation! I have also enjoyed a more than 30-year love/hate relationship with Man City football club – the whiskey helps.

We hear it was thanks to the NHS that you met your wife...

Yes, we met in the melting pot of a hospital, where many people meet their partners. It was when I was a nurse and Alison was a physiotherapist.

Alison is now a professor at Manchester Metropolitan University. She’s also the Pro-Vice-Chancellor for the Faculty of Health, Psychology and Social Care.

And, our favourite question of In Conversation With….do you have any pets?

We’ve got a black Labrador, Finlay, who we’ve had since he was a puppy, he’s ten now. We’ve also got an 18-year-old cat, Alice, who’s very grumpy. She’s got no teeth and has to have food she can suck; she can still scratch though! And she’s got more vocal as she’s got older.