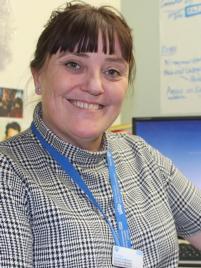 Here is the next instalment of our new series: In Conversation With… introducing Caroline Moore, our Director of Nursing for Specialist Medicine.

Lives: in Brentwood with husband Geoff and daughter Alex, 23. Caroline also has a stepdaughter, Jenny, 35.

And: Caroline once got to meet the Dalai Lama in Mumbai, which she said was spectacular!

Congratulations on winning the lifetime achievement award at our recent PRIDE Awards – how did it feel to win?

I was flattered and delighted! I was chuffed just to be nominated, especially as there are so many others in our Trust who deserve it.

I didn’t know that it was my own senior nursing team who had nominated me until afterwards. I felt incredibly proud when I found out.

How long have your been at our Trust and how has your role changed?

I started as a nurse practitioner at Harold Wood Hospital in 1991, so 27 years. I moved to the Emergency Department (ED) at Oldchurch Hospital in 1994.

After several years in ED I decided I should see if there was a life outside of it and moved to King George Hospital in 2000 to set up the new medical assessment unit from scratch. It was a steep learning curve but it was wonderful.

I’ve also been a matron at Oldchurch Hospital overseeing five areas and was Head of Nursing at King George Hospital. We had a fantastic senior team and we all pulled together and did what we had to. I loved it and it left me with a real passion for King George.

So while I’ve been here for a long time, I’ve done lots of different jobs so it’s been like 10 different hospitals. That’s the reason I’ve stayed, the opportunities.

You’ve been a nurse for your entire career – was it what you always wanted to do?

I never considered it! I was very sporty when I was younger and I wanted to be a PE teacher but didn’t get the grades I needed to do teacher training - so I needed a plan b.

I grew up in Ireland and when I left school there was a recession and it was really hard to find work. Some of my friends had left do nursing training at Whipps Cross Hospital and I missed them – so I followed and started my nursing training on 5 September 1980.

I took to it like a duck to water and absolutely loved it. I’ve never looked back.

I’m a very sociable person so I like the interaction with patients. I also like to help people and try to make a difference.

I believe I am a strong voice for nursing and feel passionate about coming into work every day. When I don’t feel that, I’ll know it’s time to go.

I also love a challenge – and there have been many! It would just be nicer if they came one at a time.

And we hear there’s a story behind how you met your husband, Geoff…

It was in the ED at Newham General Hospital, but it wasn’t great!

I’d been sister for just a month and the department was very busy at the time, so I was under pressure. He was a murder detective investigating a case.

We had a bit of a difference of opinion (so nothing’s changed!) over where he should see the patient, who was deceased.

We met again at a Christmas social event a couple of months later which was where we had the first spark. I think we both saw each other as a great challenge!

Do you have any particularly memorable patients from your career?

There are so many that stay in your mind. My most memorable was when I was coming in for a night shift and a man in his 50s had a cardiac arrest in the car park.

This was in the days of mouth-to-mouth so I did that and CPR while his wife went to get help.

Ten days later he came to find me with a gift to say thank you. His wife told me he’d always had a thing for nurses and said that had been an extreme way to get a kiss from one!

It really sticks in my mind as he could so easily have died. It showed the difference between treating someone in the ED with all the equipment around you, to being faced with a patient needing lifesaving care in a car park.

What are your interests outside of nursing?

I grew up in Limerick, a rural country girl and was obsessed with sport. I played on lots of regional teams as a girl, hockey, tennis, hurling.

I still love sport. I’m hugely into rugby. I support Ireland of course and we go to as many tournaments as we can. We’re hoping to go to the next Lions tour in South Africa in 2021.

Geoff is English so we support our home teams if they play each other, and then I’ll support England and he’ll support Ireland when they play anyone else.

I also love Formula 1 and reading crime novels – the more morbid the better!

We have two cats. Ella is 16 and we got her from the Pussycat Lodge Trust.

Kasabian is nine and the size of a tiger! Everyone stops when they see him. He presented himself on our doorstep one day. We thought he was a stray and he moved in immediately and we fell in love with him.

We had him for a few years then had to take him to the vet and we were devastated when they found he was chipped and had other owners. We were heartbroken thinking we were going to lose him but when they contacted the owners, who had moved away, they decided as we’d been looking after him we could keep him. So we cried all over again! Even the vet nurse was in tears.