In conversation with Sue Lovell, midwife and lover of the great outdoors 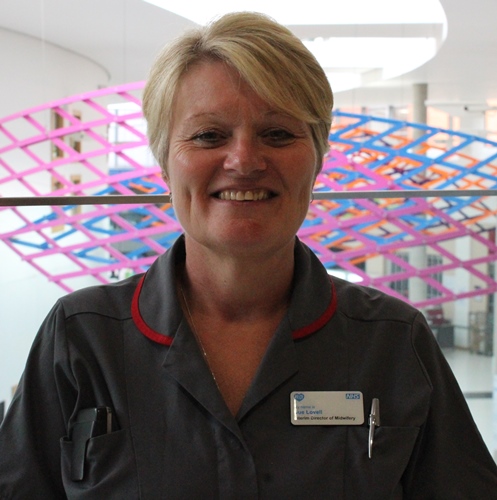 Sue Lovell, our interim Director of Midwifery, wanted to be a midwife since she was a little girl – and she still loves her job after 24 years at our Trust! She was also voted Midwife of the Year for the London region in the Emma’s Diary Mums’ Midwife of the Year awards earlier this year.

When did you decide you wanted to be a midwife?

I only ever wanted to be a midwife. I was around eight when I first said it and my mum said I always stuck to it. It was a bit of a surprise as there was no one medical in my family at all. And I’m not sure why I chose it!

I qualified and then left to have my first child. After that I stayed out of the NHS for a while and worked in residential nursing homes, before coming back as a student midwife.

Barking Hospital was great as I lived nearby so it was good as I had both the boys by then. I’ve worked in a variety of roles, including a community midwife, clinic sister, a general manager and then consultant midwife. After Wendy Matthews, our former director, left in June, I’ve been interim Director of Midwifery. I previously spent a year in the role when Wendy was acting Chief Nurse before Kathryn joined us.

What do you like most about being a midwife?

I love my job. One of my favourite things is when you see life come into the baby just after they’re born. At first, they’re lifeless, and it’s that moment when life comes into them. It’s so special and you can see the love the parents have for that baby. It’s a privilege to be part of it.

I’ve contemplated retirement but I’m not ready! I like the team work here and how our staff put the women at the centre of the care we provide.

Overall it’s a really nice place to work, friendly and supportive and keen to develop our staff. It’s definitely the people that have made it for me, it’s like a family.

I’ve also been lucky with the career progression I’ve had here, I never saw myself going into management!

You’ve been here through some pivotal moments, including the aftermath of a bad CQC report in 2011, and consolidating our Maternity services at Queen’s Hospital. What was that like for you?

It was a horrendous time after that CQC report, but I feel that was actually what made us a really good team.

All senior colleagues worked clinically to support our staff and we built team spirit. We couldn’t have got through without it. In terms of the consolidation, it is easier to manage services on one site. It helps us get the right staff and it’s safer for our patients.

We get a lot of positive feedback and that really boosts morale.

After over two decades delivering babies, do you know how many you’ve helped welcome into the world?

Thousands! It’s hard to keep track as at times you can deliver two a day.

Does having had your own children make a difference to how you help other women in labour?

It’s certainly made me more empathetic as labour wasn’t easy for me! I would say I’m more understanding.

You must have seen some interesting births over the years…..

Absolutely, we’ve had babies delivered in car parks, the back of ambulances and even cabs!

One of my most memorable was when I was a community midwife. A doctor was having her fourth child and she wanted a home birth.

Her husband was filming and as she took her knickers off, baby came down with them and landed on the floor! The baby was fine but had to go to A&E to be checked over and it was ironic as the mum was an A&E doctor here, so she would have been the one doing the checking had she been at work! Dad caught it all on camera!

What do you get up to when you’re not at our Trust?

I love the outdoors. My dad worked for the Scout Association training leaders so I was brought up on scout campsites.

I love camping, skiing, walking. I did lots of outdoor activities with dad when I was young and we carried it on with our boys. They’re both very sporty, Anthony ran for Essex and Stuart did karate.

I met my husband, Barry, when I was 19 and he was volunteering on the campsite. I used to hang around and, given it was scouting, I was often the only girl.

I was in the shop and he was cleaning toilets when we met, and we’ve been married now for over 30 years!

My son Stuart’s dog, Doug, a Labrador, is living with us at the moment and I also inherited a cat last Christmas.

It belonged to an old lady who had passed away so the police were looking after it and as he knows I love cats, Stuart brought it home to me!

I kept the name, Sibby, and she’s lovely. She’s got some strange eating habits though, she won’t eat from a bowl and will eat food like bread if she can get it.

We’ve had a few cats over the years and Sibby is the first with two eyes and four legs! One of our previous cats lost an eye to cat flu and another one had a bad leg after being shot with an air rifle.