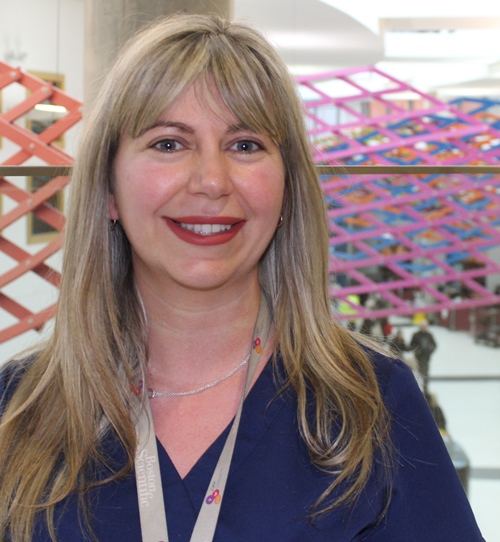 Here is the next instalment of our series: In Conversation With…Olivia Sanders, lead interventional radiographer.

And: Politics mad Olivia is a local councillor in her hometown – she’s even after the health secretary’s job one day!

I’m lead interventional radiographer in our neuro radiology team. I x-ray our patients while the surgeon operates so they can see what they’re doing. We do minimally invasive surgical procedures, going in through the groin. We’re involved in a variety of procedures, including mechanical thrombectomy, where we remove blood clots from stroke patients, putting in a line for chemotherapy antibiotics and cutting off the blood supply to tumours before surgery.

I’ve been at the Trust for ten years; I joined the neuro team after my first three months.

How did you decide to work in radiology?

I come from a family of lawyers but I knew pretty early on that wasn’t for me. I’ve always wanted to work in a hospital, and I decided on radiology after I broke my elbow at 16 - walking in new shoes at Lakeside! - and had an x-ray.

I’m really impulsive so once I have an idea in my head, I go with it. I also had a feeling it was an up and coming profession. I studied diagnostic radiology at City University and finished my training and got my first job at Broomfield Hospital.

I discovered neuro radiology from watching a BBC documentary. They don’t have that speciality at Broomfield so after a night shift I drove to Queen’s Hospital and asked for a job! I had an interview and was working at our Trust weeks later.

I find working with the brain really fascinating. We treat some of the most critically ill patients and I love being part of their treatment process. Some stroke patients can be up and walking around the ward the day after a mechanical thrombectomy. A few years ago we had a 21-year-old guy, Joseph, who had a stroke. He was given a thrombectomy and recovered really well which shows how life changing it is. It’s an amazing procedure.

Tell us more about your own experience of disability

I lost the use of my right leg four years ago, out of the blue, and found out I had a rare chronic hip condition. I had three operations in three years as well as three other procedures and was walking with the stick until last September – I had lots of colourful crutches which everyone commented on.

It’s the same condition Andy Murray has – he’s seen my consultant in the past!

Having had a disability, and there are still some things I can’t do, helps me understand my patients as I can see how life can change in an instant.

Do you have any particularly memorable patients from your career?

On my last night shift at Broomfield we had a trauma call for a 17-year-old girl who had been in a car crash. When we x-rayed her we found her spine was dislodged from her skull. There was nothing we could do for her. The worst thing about it was that she was so young.

I have a photographic memory so I remember all my patients’ names. We provide a continuity of care to our patients, following some of them over five years so it’s nice that they remember you too.

Tell us more about your political ambitions

I was elected as a Conservative councillor in Brentwood in 2014 and re-elected last May. I’ve always had an interest in politics and did it at A-level. My dad’s friend is a councillor and said I’d be good at it and should try it out, so, as I’m impulsive, I applied. Campaigning was six intensive months of leafleting and canvassing.

I chair the Planning and Licensing committee, the Health and Wellbeing Board and the Youth Strategy Group. It does take up a lot of time but I really like being part of decision making.

One day I want to run the health service. I met Matt Hancock, the current Health Secretary, in October and told him I wanted his job one day. I’ve met lots of MPs, I like to get a selfie with them, I’ve met Boris, Jacob Rees-Mogg, Zac Goldsmith, Theresa May, and David Cameron when he was Prime Minister. He was the hardest to get.

What else do you get up to in your spare time?

My family runs a wedding venue at Hutton Hall in Brentwood. We all help out, my parents and my sister, who is a nurse. We’ve got 40 weddings this year.

That leaves me needing lots of holidays! Holidays and designer shoes are my vices.

I’m planning to go to Les Vegas this year for the 15th time, and also to visit family in Italy, both my parents are half Italian and my mum has a large Italian family.

I have a cat, Mr Kitty. He did live with Raghu Vindlacheruvu, one of our neurosurgeons. He asked me to look after him for six weeks and he never went home again.

Everyone loves him and we have a big garden which he really enjoys playing in.