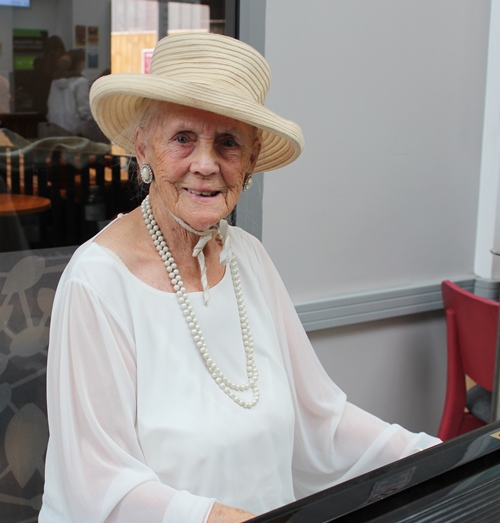 It’s a very special In Conversation With this week, we spoke to one of our more musical volunteers, Patricia Ashford. You may have heard her play the piano beautifully in our atrium at Queen’s Hospital every Friday, but did you know Patricia was also once a nurse at King George Hospital?

And: Patricia was married to late husband Geoffrey for over 60 years and they have two sons, David, 65, and Noel, 60. They also have five grandchildren and six great-grandchildren.

When did you first start playing the piano?

When I was four years old. My parents owned a piano and my aunt told me that one day I just asked to be sat on the stool and played the tune of ‘Isle of Capri’ with one finger.

Everyone was shocked and my parents brought all the neighbours in to hear me play. They were so proud it became a monthly thing until I started school.

I’ve never had a music lesson.

When did you start volunteering at our hospitals?

I started at King George Hospital after I retired when I was 64. I did it for four years and loved it – I was in charge on the front desk and helped train people up when I wasn’t working. I wanted to do something as I was bored after retiring.

I started volunteering again two years ago when I came in and asked to play the piano, they said, ‘can you play then?’, I told them they could soon stop me if they didn’t like it!

I play every Friday between 12noon and 1pm.

Tell us more about where you’ve played over the years

When I started school, the headmistress found out I could play the piano and took me around every classroom to play. I can’t remember much about whether I was nervous, I was in awe of what was going on.

I had four brothers and one sister and my brother David and I were evacuated together when World War Two broke out. We went to Glan Conway in Wales. For me it was a wonderful experience as I didn’t understand the war.

I did miss my family, however, we were looked after by a lovely couple who we called Mr and Mrs Jones and stayed with them for two years. I remember when we arrived we had fresh bread with homemade butter and the best rabbit stew I’ve ever had. They lived on a farm which was so different to what I was used to – they showed me how to churn butter and milk a cow, which was awful!

Mr Jones, who’d been told I could play, took me to a cottage one day where a couple lived who had a piano – it was so grand I’d never seen one like it before. So I got to play there too and afterwards I was given the best home-baked scones I’ve ever eaten.

I always played for my family too, I used to play after dinner every night and we would all sing together.

At 17 I was invited to a dinner at a club in Manchester where I played the piano. At one point, talent scouts from the Carroll Levis and His Discoveries show (an early version of reality shows like X Factor) came to my house and asked me to be on a show in Blackpool. It could have been my big break but my dad chased them away!

I also play abroad a lot. I was on holiday in Malta and there was a pianist playing in a beer garden. I played when he took a break. When we were back at our hotel we had a call to say there would be a car waiting for us later. We were taken to dinner at the Hilton and then I got to play with a full concert orchestra – the pianist in the orchestra was the one from the beer garden! That was amazing.

Where I can, I play in every hotel I stay – I’ve played in Italy, Spain, Portugal, Cyprus, Menorca and lots more. I’ve been offered contracts to play longer term too, but I’m 90 so I just enjoy doing it for fun.

Tell us more about your career as a nurse

I did my training in Liverpool when I was 18. It was during my training that I went on holiday to Yorkshire and I met my husband Geoffrey. He lived in Barking – which I’d never heard of!

When I first visited London I couldn’t work out why police officers kept saluting at him, the car he was driving had the Queen’s crest on it, and he told me he worked for the Ministry of Defence.

We would visit each other for the first couple of years and I moved to Essex after my mother passed away. I started working at King George Hospital as a nurse – it was in Eastern Avenue then.

I liked the idea of being a nurse as I’d helped to look after my mother. I loved everything about it, and I had a lovely uniform.

I had a break when I had my sons then I went back to work part time as a nurse at Barking Hospital to make some extra money for pay for the boys’ football boots.

Then I worked as a hygiene officer in the food industry – I applied because you had to have nursing experience. I did that for 25 years and travelled all over the country as an inspector.

When Geoffrey got ill I took him to King George Hospital and he was diagnosed with terminal cancer. He died in 2006 after I nursed him at home for eight months.

I had a bad fall myself a few years ago and was seen at Queen’s Hospital. I broke my left arm and it still affects how I play.

What do you like most about playing the piano?

I enjoy giving people pleasure when I play and I love to see their expressions when they’re enjoying it.

Music has been a big part of my life. You also make lots of friends as people often come up to speak to me when I’m playing. I grew up in the church and the priest told my parents that my being able to play the piano so well, without being taught, was a gift.

I recently went back to Cyprus where I played the piano again. I go abroad on my own twice a year and people say to me, ‘I don’t know how you can go away on your own’. But to me, I’m never on my own thanks to my music.