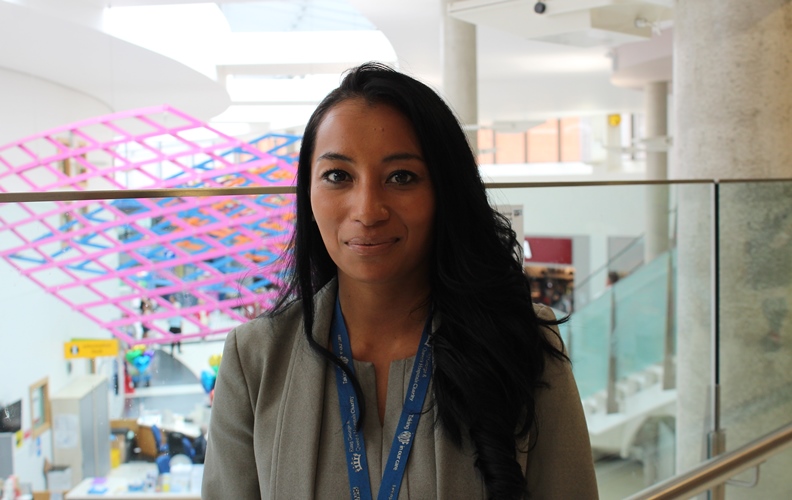 And: Before our Trust, Eleanor had a glamorous career in fashion – travelling the world and meeting celebrities!

Tell us a bit more about your role at our Trust

I started in 2016 as a receptionist for our Radiotherapy department. Last September I joined our Outpatients department on a secondment as reception supervisor.

There are two of us, I work with Francis Edwards and we’re responsible for 18 staff across five reception desks in outpatients. It’s quite a big step up for me, it’s challenging and there’s a lot going on – it’s been really good so far.

We hear you got a namecheck on Chris Evans’ breakfast show when working in Radiotherapy….

I did, and my picture was on the website too! It was with a patient who had rung our end of treatment bell. He was really grateful for the care he’d received and his story ended up on the show on BBC Radio 2. He’d thanked me for being so helpful and I was really chuffed when Chris Evans’ said my name.

I really enjoyed my time in Radiotherapy. The end of treatment bell was introduced and I used to write the certificates too. I found it really emotional. For many of the patients, you see them every day for six weeks or more so you build a relationship with them and it’s lovely to see them get to the end of their treatment and ring the bell.

Of course there are really sad times when a patient doesn’t make it. I remember one lady who I used to see all the time. After she died her husband came to tell me, I was so upset. He also brought in a box of chocolates to say thank you.

I found the patients were all really thankful for the treatment they received and the help and support from all the team. On reception I would often be the first face they’d see, so it was it was really important to be as friendly and helpful as possible.

Tell us a bit more about your career before our Trust

While growing up I was interested in fashion and wanted to be an editor for a magazine like Vogue.

I studied media at college and started working part-time to earn some money. Ann Summers was my first job. You would see all types of people in there, including some you wouldn’t expect, like lots of elderly ladies!

I also worked in a boutique on a luxury cruise liner. We had former England manager Terry Venables on board, and the owner of the fashion brand Reiss. I didn’t realise who he was and said we had a shop with the same name on board – he pointed out that he owned it!

When I worked at Calvin Klein for six years I got to indulge my love of fashion. I managed a few different branches. I started in Harrods and was promoted to manage the flagship Regent Street store after we were 20 per cent over our target sales.

I met lots of celebrities, including Kyle Minogue, Katie Price and Usher. I found them all really down to earth. I also hosted a personal appearance by actress Eva Mendes when she modelled for us.

I used to see the former owner Mohamed Al Fayed a lot. He was nice and down to earth too, although he did do floor walks around the store with his four bodyguards, who all had ear pieces in.

What I also liked about that job was that I got to travel: I went to Marbella and Italy to watch fashion shows of upcoming clothing lines, and to visit the distribution centre in Holland.

It was after I had my son that I wanted to work closer to home and worked as an employment consultant for the Department for Work and Pensions, helping people on benefits find work.

I found it really fulfilling and enjoyed helping people.

How did you end up at our Trust?

I was made redundant just as my son started school, so I took a year out and really enjoyed taking him to and from school.

It wasn’t easy to find another job, but it did all fall into place at the right time as I started my job here the following September as he went into year one. I applied after seeing the job online. I was offered another job around the same time which was a recruitment role, more what I was used to, but I decided to come here as my last role had made me appreciate being able to help people.

That it’s a community. The staff here are really close knit, even though our Trust is huge. There are so many people to say hello to when I’m out and about.

We all really help each other and put our patients first, as they’re the reason we’re all here in the first place.

I feel really happy at work and I like that everyone is so friendly.

My son and I do karate together. We’re both an orange belt at the moment. We go twice a week and it’s really bonding.

I love spending time with my son. We go shopping, or for country walks. I often find myself doing overtime when he’s at his dad’s so I can catch up on paperwork.

Tell us an interesting fact about yourself….

I was born in Bahrain. My mum is from the Philippines and my dad is English, they met when they were both working there. I was two when we moved to England.

I went back to Bahrain when I was working on the cruise ship. It’s beautiful and I really resonated with it. It has a huge variety of nationalities.