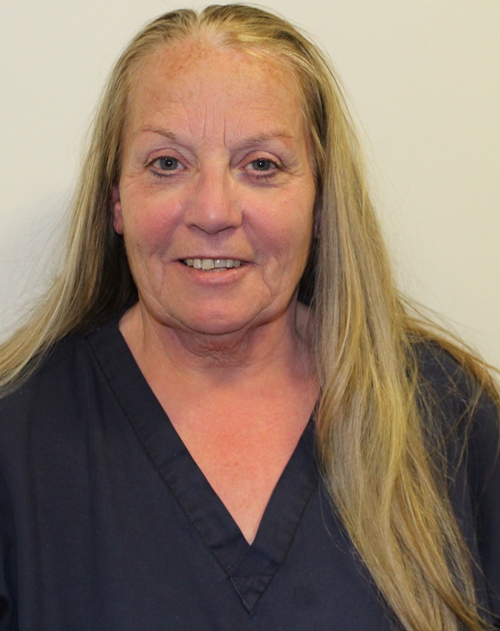 Here is the next instalment of our series: In Conversation With…Sue Rogers, senior operating department practitioner.

Family: Sue has a son, Sean, who works in a bank in Canary Wharf.

And: Working in our theatres was an interesting career choice for Sue, given that when she first started out she couldn’t stand the sight of blood!

I’ve been at our Trust for 32 years and worked in all our hospitals, Rush Green, Harold Wood, King George, Oldchurch and Queen’s.

I’m a senior operating department practitioner (ODP) in our maternity theatres and I’m like the anaesthetist’s right arm. I’m there to make sure everything is ready, preparing drugs and fluids, and I stay throughout the procedure, seeing the patient into recovery.

We do a lot of C-sections, elective and emergency, and I’m involved in any intervention we do in theatres.

Tell us a bit more about your career, and how you ended up in healthcare, given your early aversion to the sight of blood…

It was an imaginative career choice for me!

I started out as an office junior at a car company straight from school when I was 16. I was quite naughty at school – given I was part of a big brood of seven, I was very loud and boisterous – so I think the teachers were glad to get shot of me, even though they knew I was capable of staying on.

After doing office roles for a bit I got really bored and wanted to do something else and my mum saw an advert for an auxiliary nurse role at Rush Green Hospital.

I went for an interview and it was like they were speaking another language – they said I’d be a runner, and I even went out and told my mum I needed to get some new trainers – I thought they meant actual running!

They had a lot of applicants so I was very surprised when I got the job, and I found out years later that one of the matrons who’d interviewed me had said not to hire me as I’d be trouble!

I did that role for a few years before my matron was keen for me to do more training and an opportunity to train to be an operating department assistant came up.

I did on the job training, some of it at St Margaret’s Hospital in Epping, the only time I ever went outside of the Trust.  I loved it there, it was like a little cottage hospital. I joined the course six weeks late and had to catch up. It was that or wait a year. They did everything to keep me but I wanted to come back as I had friends here.

I passed after my second year and came back to work at Oldchurch, then my mum died of cancer at the same hospital and I found it really hard to settle after that, so I moved to Harold Wood.

Coming to Queen’s was mental at first. It’s still the busiest hospital I’ve ever worked in and I’m sure I’ve done more work here than at all the others put together over the years.

What about your first day, when you almost made a swift exit…?

I was told to go and observe in the theatre, this being back when I couldn’t stand the sight of blood. I remember it like it was yesterday – a lady was prepared for a vaginal hysterectomy. I was horrified and felt so unwell I had to go out.

In the staff room I had my bag and coat and seriously considered slipping out – no one else was around and I could have been on the bus home within minutes. Then someone came in and spoke to me and the moment was gone, and I’m still here 32 years later!

I can only say I got used to the sight of blood. I’ve seen everything now so nothing bothers me – I could even eat my lunch while an operation was going ahead (but I wouldn’t!).

I love what I do. Of course I have bad days when you just want to disappear, but for the most part I love everything about it.

There are still people in theatres now who I knew when I was starting out, like Ruth Sparks, Linda Cha-Cha and Barbara Miller. I like the familiarity, and the people. I’ll be here till I retire, and I’ll really miss it when I’m gone.

I love the patients and the variety. It’s lovely when babies are born, you get caught up in the excitement with the family. Some of the most special ones are when it’s a mum who’s waited for years and given up, then got pregnant.

When the baby comes into the room it’s like you’re living a little dream with them – everyone’s crying and it’s very emotional, and easy to get caught up in it.

What do you like to do when you’re not at work?

I like to go horse racing and enjoy some of the big events, like Cheltenham and Ascot. I have a flutter and have had a few wins.

And when I need to wind down I like going to the gym, for a swim or to do a class.

I also love to travel, I was in Los Angeles recently and I’ve just been to Ireland; 12 of us went for my brother’s birthday. My parents were from Ireland.

I’ve got a big family, between me and my six siblings we’ve got 22 kids and 19 grandkids, and we’re really close. We’re going to Mexico together in August.