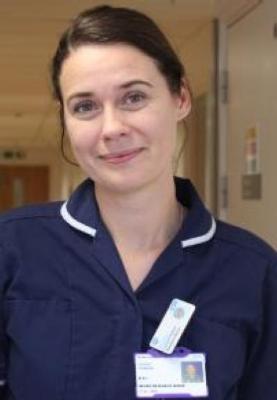 Our latest In Conversation With… interview is with Laura Parker, our neurosciences research nurse.

Laura joined our Trust in 2009 and has followed in the footsteps of her mum Karen, who is also one of our nurses. While Karen tried to talk Laura out of becoming a nurse because of the pressures involved, she’s hugely proud of her and tells everyone what she does!

Lives: in Romford with her partner Richard and daughter Rebecca, four

And: Laura had always wanted to be a nurse but mum Karen, also a nurse at our Trust, tried to discourage her as, ‘it’s not like it is on the TV’!

I’m a research nurse for neurosciences. It’s completely different to normal nursing. I have eight trials running at the moment. Some days I’ll be seeing patients, taking bloods, spinning them or going to theatre, other times I’ll be looking for patients for trials or I could be doing paperwork.

How is being a research nurse different from normal nursing?

One of the biggest differences is that patients on trials get one-to-one care. Whereas on the ward I’d be seeing lots of patients throughout the day, I have a bit more time to spend with my patients.

I follow-up with them when they’ve had treatment or an operation and I can co-ordinate other care, separate to the trial. This is so they come in once and get everything done, rather than making lots of trips.

Had you always wanted to be a research nurse?

I’d always wanted to be a nurse. I have a younger sister and brother, there’s nine years between my brother and I so I was like another mum to him and was always maternal and caring.

My mum, Karen Parker, is also a nurse. Growing up I saw neighbours knock and ask her for advice and she and another nurse who lived in our road helped a man who had gone into anaphylaxis after a bee sting and passed out in someone’s front garden. Seeing that really made me want to do the same one day.

But that wasn’t your initial career path was it?

No. My mum told me that nursing wasn’t like it was on the telly, it was hard work and she’d worked in the emergency department, so she knew the pressure and didn’t want that for me.

So I went to art school to do a photography degree. When the lecturer asked if I could one day see myself running a studio I realised I really couldn’t, so I dropped out, but I didn’t tell my mum for three months! She’s really proud of me now though and tells everyone that I’m a nurse and followed in her footsteps.

I’d had some experience working as a healthcare assistant, so I went to do that at the Royal Berkshire Hospital. I loved it, I was taking patients to theatre, taking blood - it made me realise 100 per cent I wanted to be a nurse. So I applied for training and was accepted at Barts School of Nursing.

On a training placement at a private hospital I knew I wanted to work in neuro. An American colonel had been brought over for removal of a brain tumour because no doctors in the states wanted to touch it. I noticed he was sweating and had an irregular heart rate but no one seemed that concerned, so I asked a senior nurse and she explained there wasn’t anything wrong with his heart, it was all caused by his brain and was really common.

I found it fascinating that the brain controlled everything and decided to be a neuro intensive care nurse.

After my six months on a renal surgical ward, which was a real crash course, when I finished my training, I got my first job in neuro intensive care at our Trust in 2009.

Why the move to research nursing?

I never thought I would end up in research! After four years I moved to our general intensive care unit, becoming a team leader but it took me away from patient care and I missed it, and then the neuro research job came up. I started last December.

It worked out perfectly as it was part time and my daughter recently started school, so it allows me more ‘mum time’.

Before I saw the job I didn’t realise we did research and I know that a lot of people don’t either, but there is so much going on at our Trust – we have 104 studies going on right now! And most areas have a research nurse.

There are a lot of misconceptions about research teams – like that we’re super academic! We are clinical and get to do a bit of everything, management, seeing patients and working in the lab.

What’s the best part of your role?

Spending more time with patients and getting to know them. The most exciting study I’m working on at the moment is looking to improve symptoms for patients with Parkinson’s disease through medications to reduce involuntary movements. Working with one of the patients on the trial I can see how much he struggles with everyday things like doing up buttons or using a computer. The thought that we could help him and improve his quality of life is great.

All the things we do now for our patients, all medicines and treatments, came from research. Research provides us with the standard of care and best practice.

No - it could impact on the way we interact with the patient, so we don’t know!

What do you like to do with your spare time?

I love food and wine. My partner is an amateur chef so he’s always cooking something up. He works in cyber security for the government so his passion for cooking is quite different from that! And we love to get away at the weekend and try new restaurants.

Rebecca also loves cooking with him, she made gnocchi recently. She even has her own little stool to use in the kitchen.

We have two cats, Eddie and Tootsie. Rebecca describes Eddie as lovely as he gives her cuddles and Tootsie as grumpy, as she is quite antisocial.

We also have a shared lake with ducks at the end of our garden and Rebecca loves feeding them. She’s obsessed with animals and wants to be a vet!