In conversation with Alexia Young who decided to be a speech therapist at the tender age of 10! 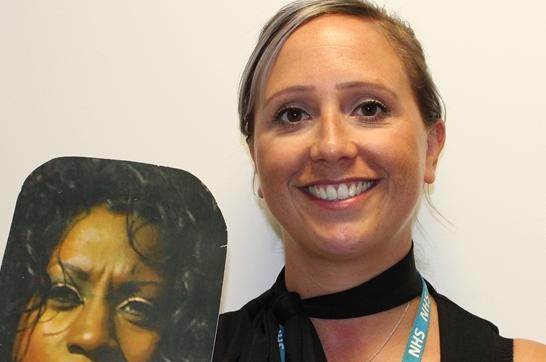 Our lastest In conversation with subject is Alexia Young, interim therapy manager and our clinical lead for speech therapy.

And…she’s an identical twin, sister Hannah is a police officer!

At the moment I’m in two roles, I’m the clinical lead for speech therapy and for the last three months I’ve also been one of our interim therapy managers.

Our Speech and Language Therapy team work across the Trust with patients who have communication or swallowing problems. We do a lot of work on our stroke wards, assessing patients and providing rehabilitation. It can be anything from taking them to order a coffee if they’ve lost a bit of confidence, or giving them exercises to strengthen their facial muscles. Anyone can send an e-referral to us, for example, if you have concerns about food or drink getting into the lungs.

How are you finding your new management role?

I’m learning all about staffing, budgets and equipment and understanding more about strategic planning. I definitely feel that there are more opportunities at our Trust for Allied Health Professionals at the moment. Everyone’s been really supportive and the best part is that I’m getting more one-on-one time with colleagues and getting to know more teams.

The only downside is that it takes me away from my patients.

When did you decide to become a speech therapist?

I was 10. The reason was that my mum’s best friend’s daughter, who was a few years older than me, said she wanted to do it and whatever she wanted to do, I wanted to do… Ironically, she never did it, she’s in marketing now! But it stuck with me.

I didn’t really understand what it was and it was only when I started my university course that I realised how scientific it was, and I’m not scientific at all!

Tell us about your path to our Trust.

I joined in 2016, my first role as clinical lead. I joined from the Royal Brompton and Harefield Trust.

I finished a four-year speech therapy degree at City University in 2006. I’m originally from Yorkshire and planned to return after I finished my course, but I met a Londoner. Right at the end of my course. He’s a physiotherapist and we were on a clinical placement at the Homerton. I’m glad I stayed though, there’s more opportunity to move around big hospitals in London that I wouldn’t get at home. And now we’re married too!

What are some of your proudest achievements?

Before I came, we didn’t use speaking valves for patients on ventilators, which allow them to talk.

I introduced them not long after I joined. I remember an 18-year-old girl who had a degenerative neurological condition and she was on a ventilator. It meant the world to her that she could speak.

I also introduced nasal endoscopy here. They’re particularly useful for patients who are critically ill and can’t easily go for an x-ray and give us an early warning to what could be causing the swallowing issue.

We’re also running a craniotomy pilot where we go into theatre during brain surgery. It allows the neurosurgeon to test parts of the brain around a tumour to see if it’s safe to remove. The therapist asks questions to see if that part of the brain is linked to speech. We’re hoping to introduce this permanently at our Trust, it helps our patients as it can reduce unintentional damage during surgery.

What’s the best part of your clinical role?

I’m predominantly based in critical care, and one of the best bits is when a patient is well enough to go home. When you’ve seen them at death’s door, it’s really lovely to see how far they’ve come.

I also love the day you put a speaking valve on a tracheostomy patient (when an incision is made through the neck to allow a patient to breath) and their family hears them speak for the first time in a while. There are usually tears - of joy!

Being a speech therapist is an awesome career and I absolutely love it.

Why do you have Heather Small (formerly of band M People) on a cardboard head on a stick in your office…?

Heather Small did this very big song called ‘Proud’ – you’ve probably heard it [if you’re interested, the PRIDE Choir has a recording of it here – all proceeds to our Charity!]

So, at the beginning of every team meeting, I make my team pass Heather around and say what they’ve done that’s made them feel proud! They hate it but I do it every time!

And, fast becoming our favourite question of In conversation with…..do you have any pets?

We’ve got two Persian cats – Dotty and Yoshi. I got them as kittens just over a year ago for my birthday. I grew up with animals and always wanted cats but when I moved to London I was in rented accommodation and couldn’t have pets. My husband promised when we got our house we could get a cat.

I knew my family were helping me to get one, and Jamie surprised me with the other one. They like getting up to mischief together and, being Persians, they get groomed a lot!