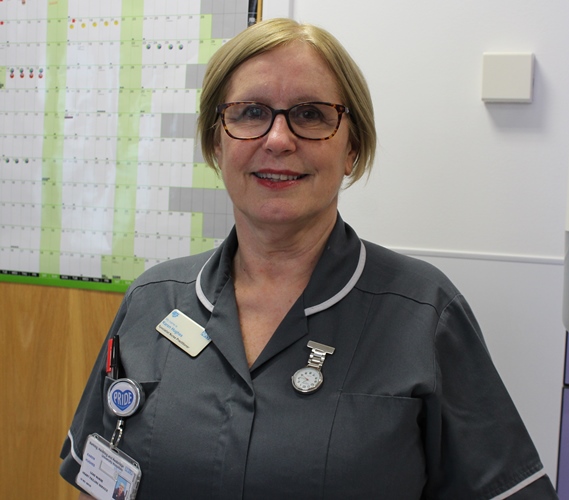 This week we spoke to Karen Hughes, lead nurse for heart failure services at our Trust. Karen retires this month after over 45 years at our Trust, the majority of those in the area she’s most passionate about, caring for patients with heart failure.

Lives: In Romford with husband Peter, 64.

And: Karen loves the NHS and it shows – most of her family work at our Trust too, including her two daughters, Laura and Kelly, as does Kelly’s partner Freddy (who has already been an In Conversation With subject), and Laura’s husband George!

How did you get into nursing?

My mum and nan were both nurses so it was quite inevitable!

When I was in college I worked at a village hospital for people with learning disabilities. I wanted to make a difference, which was why I trained to be a psychiatric nurse, starting a three-year course in 1974 at Goodmayes Hospital, which was part of our Trust then. I spent two years as a registered psychiatric nurse.

We used to accompany patients to King George Hospital for treatment, which I didn’t like. I thought ‘I’m a nurse, why can’t I do it?’ But we weren’t allowed to deliver medical care.

That’s why I decided to do adult nursing training and become a general nurse. My first post was on our Coronary Care Unit at the former Barking Hospital. As soon as I found myself holding the hands of patients who were in tears as they were frightened they may go to sleep and not wake up, I knew cardiology was what I was supposed to do.

In 1982 I decided to have a family and left nursing to be a stay-at-home mum. I lasted seven months before I came back! I joined the bank where I did a range of roles, including orthopaedics and paediatrics. It helped me learn lots of skills.

I found working with kids wasn’t good for me as I got too emotionally involved. Adults can tell you what’s wrong, whereas children can’t always.

I did bank until the late 80s then started working on our cardiac and general medical ward at the old King George Hospital. When we moved to the new building, I worked Gardenia, the coronary care ward.

By 2000 I felt I was burning out so I took some time out to do a part time role as a cardiac research sister. It gave me a good work/life balance and I really enjoyed it.

In 2002 Andrew Deaner, our consultant cardiologist and clinical lead, wanted to develop a nurse-led heart failure service, and wanted me to be the person to deliver it. I project managed that for eight months then took on the lead nurse role. My passion for cardiac nursing took on a whole new level.

The service has evolved and is very different now to what we set up. We manage the whole pathway for patients with chronic heart failure, from diagnosis to end of life care. Previously they were diagnosed, given medicine and sent home for their condition to be managed by the GP.

Now we’ve helped set up three heart failures services in the community to provide specialised care, we have supported a one-stop diagnostic clinic, by triaging GP referrals, and we’re 100 per cent compliant with our targets to see patients within two or six weeks.

It’s one of the things I’m leaving behind, and I’m very proud of it.

What’s kept you in nursing, and our Trust, for so long?

I love that it’s about people, it’s amazing. It’s a real privilege to be able to make a difference in a person’s life through supporting their health, and I’m not just interested in their heart, I’m interested in the whole person.

I’ve also worked with a committed and dedicated team who have been really open to service changes to make things better for our patients. King George Hospital has become like a second home to me and I’ve grown with the staff and we’ve become a big family. As I moved to manage the service cross-site including Queen’s Hospital, my family got bigger.

My small team of three heart failure nurses and two administrators are a credit to our Trust. Their hard work and dedication has ensured we can deliver a high standard of care to our patients.

All teams across the service work really well together and the patient comes first, regardless of whether it’s diagnostics, the ward or the cardio lab.

The Trust itself has had big challenges during my time, but I’ve always thought you can’t change it if you’re not in it. I think Matthew Hopkins changed how management was seen during his time here. I liked it when Breakfast with the Boss was introduced as it felt like he was really listening to what we had to say, so I’m glad they’ve continued.

Tell us more about encouraging your daughters into careers in the NHS?

I adore working in the NHS so I certainly encouraged my girls and they’ve both been working here a long time now. Laura, 37, is a pharmacist. She was interested in medicine when she was doing her degree so I brought her in the see our chief pharmacist to learn more about careers in pharmacy. Her husband George Williams works in pharmacy production.

Kelly, 35, was doing clerical work and I said she should come to our Trust, so she did. She’s in our Outpatients Department. And she met her partner Freddy Young, service manager for specialist medicine, and now they’ve got 20-month-old twins, Freddy and Emily.

Only my husband Peter doesn’t work for the NHS, he was in telecoms before retiring. I call him my long-suffering NHS husband! We’ve been married for 43 years after meeting at a holiday camp when I was 17.

What do you get up to outside work?

Music is my passion, any kind; rock, pop, opera. I’d live in the West End if I could. I’m rubbish at singing myself but I love listening to others; if an angel came down and offered me any gift, it would be for a voice.

And I love cruising. My first holiday after retirement will be a cruise to the Canaries with my family. I find it fascinating to wake up in a new city.

What are your retirement plans?

I’m looking forward to spending more time with the twins. I already look after them one day a week, and I want the flexibility to be in their lives when I want to be.

A friend of mine who was the same age as me died recently and it made me realise life is short. I’m in good health so I want to enjoy retirement while I can, and have the energy to run around with the babies.

I’ve also got  a large extended family which I’m very close to – I’m the eldest of eight and I’ve got 27 nieces and nephews  and six great-nieces and nephews, so I’ll be spending more time with them too.

And I’m a committee member of a cardiac support group, King of Hearts, so I’ll be devoting more time to that. I was involved in setting it up 20 years ago. It’s to provide education, as well as social and emotional support to cardiac patients.

I think it’s important for those with cardiac conditions to be surrounded by like-minded people. We’ll often say we know how they feel, but unless you’ve been through it, you don’t really.

I’ll be sad to leave our Trust, but it’s the right time.