In Conversation With...Tony Buck, from wayward teen, to university, to teaching, to the NHS! 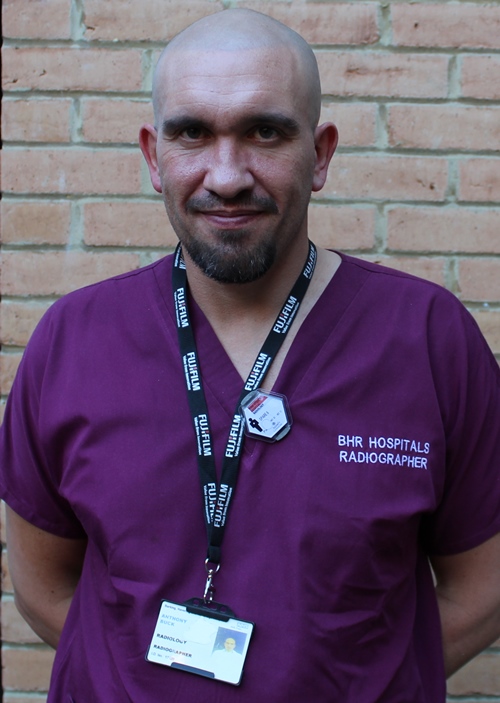 So here is the next instalment of our new series: In Conversation With…introducing Tony Buck, one of our lead radiographers.

And…Despite his early years as a self-confessed “wayward teen”, Tony has completed a degree, a masters and a post graduate certificate in education (PGCE), working as a teacher before he joined the NHS.

I’m one of our lead radiographers, covering x-ray for GPs, outpatients and satellite sites. As a manager I do organise the team but I’m still very clinical.

Tell us more about your career as a teacher

I was an English teacher at a school in Kent, however, I found out very quickly that it wasn’t for me. I couldn’t see myself doing it as a career for the next 30 years.

I’d done my GCSEs late, at 21, and had big ideas about giving something back, but it wasn’t the job I thought it was. The reason I’d done my GCSEs so late was because like most teenagers I thought I knew everything and I wasn’t very academic. You could say I was a wayward teen. I went to a Catholic school and rebelled.

So I went to college at 21 and completed eight GCSEs, three A-levels, then went on to do a degree and a masters before doing my PGCE to become a teacher.

Why the turn-around from not being academic to going as high as you have in education?

I wanted to be more than the sum of my parts. After I left school I was doing manual work on building sites, but it was freezing in winter!

Being in a warm library studying was preferable to climbing cold scaffolding in winter, and to know I could get a better job at the end of it helped too. Education is key if you want to be somebody. You have to work towards it. I was lucky that I could go back to studying, many don’t have the choice.

And we hear you’ve been a lifeguard too?

Yes, from 17 until the first year of doing my degree. I’ve dragged quite a few people off the bottom of pools and given lots of CPR. It was inside too so it was a better option than the building site!

How did you end up in the NHS and radiology?

I discovered it by chance through friends at university in healthcare careers. I wanted a job which was physical as well as mentally stimulating. I chose diagnostic radiology and it’s the best decision I ever made.

I knew it was right for me from the minute I did my first placement. Then I started work at Heatherwood and Wrexham Park Trust. I joined our Trust in 2009.

There are so many dimensions to it, you’re busy all day long, you have to think on your feet to help patients when they can’t get into certain positions, and you’re just always trying to get the best x-ray.

I also like to know I’m making a difference, especially when you see patients right from their initial injury, through their surgery and aftercare and see them get stronger. It’s great to know you’ve played a part in that.

I get huge job satisfaction. I think that’s why we work in the NHS as it’s not about making huge amounts of money! That’s the difference to teaching, I didn’t get job satisfaction from it.

I’m really proud to work for the NHS, it’s the bedrock of the UK and the envy of the world.

The people I work with are great too and were really supportive when I took that step up into management.

I’ve also been a patient at our hospitals so I’ve seen both sides and I know that we do provide brilliant care.

What’s the most difficult part of your job?

It always gets me when you see a child who has been seriously injured. They’re often the cases you go home thinking about.

Are you proud of your achievements?

There’s still lots more I want to achieve. In January I’m starting a post graduate 18-month course in chest reporting. Once qualified, I’ll be able to extend my role to reporting chest x-rays.

I’m a huge Millwall fan, growing up in Bermondsey there really was only one team to support. I go to matches as much as I can.

I’m also quite into sport, I go to the gym regularly and have done lots of different martial arts over the years, I’m doing kickboxing at the moment.

I also love to read, and after so many years of studying it’s great to be able to choose what I want to read now!