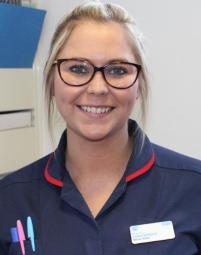 Here is the next instalment of our In Conversation With… series, introducing Leann Defriend, one of our senior sisters in our Emergency Department.

As a youngster, Leann dreamt of joining the army – but found her calling as a nurse when a medical condition meant she couldn’t sign up.

She loves being a nurse as she makes a difference to her patients’ lives every day – she even gave one terminally ill patient an early Christmas to ensure they got to see their favourite occasion one last time.

And last year, she took a three month sabbatical, visiting 48 of the 50 US states!

Lives: in Romford with nan Maureen, 71

I joined the army cadets when I was 13 and it was great fun. We did loads of stuff – kayaking, abseiling, rifle shooting (I wasn’t very good at that!).

It was when we visited an army fair that I decided I wanted to sign up. It was all I wanted to do when I left school, I even made sure I got the right grades for it. I passed all the competency and knowledge tests, interview and the fitness test but then found I couldn’t sign up as I have psoriasis, because of the risk of joint issues.

I was really disappointed and didn’t know what to do. I ended up going to college and trained to be a chef for a year because I liked cooking. It was a nice hobby but not a career for me.

Then my dad saw an advert for an open day on nursing training at Southbank University, so I went along and got accepted.

One of the careers I’d been looking at in the army was as a medic, so that’s why he suggested it.

How did you find your training?

I really enjoyed it and knew quite quickly that it was the right career for me. I did placements at Oldchurch and then Queen’s Hospital, I also did a maternity placement at King George Hospital.

At the end of my training I applied for and got a job on Cornflower A ward as I loved the team. After that I worked in the Emergency Department, then I was a practice development nurse in Specialist Medicine, then a ward manager. But I loved A&E so I was keen to get back to that!

We hear you’ve been to the London Marathon a few times – as a young medic, and a runner on one occasion!

When I was younger I was a volunteer for St John’s Ambulance and we often went to events like the London Marathon to provide first aid. We also did football matches and festivals.

There was one really hot year at the marathon when lots of runners collapsed so we had to help provide first aid while waiting for the ambulance crews to go to them. It certainly kept me busy when I was younger!

And sometimes I do crazy things, like put myself in for a place in the marathon in 2015. I hate running and was sure I wouldn’t get a place!

I didn’t do any training and tore a ligament six miles in. I finished though – I walked the rest of the way, raising £3,000 for Kidney Research UK.

Is that a charity close to your heart?

Yes, I have hereditary kidney disease. My dad had it too and had a transplant three years before he died, which was eight years ago following an infection which became septic.

I’m about to go on the list for a transplant. You go on when your kidney function is 15 per cent or less – I’m currently at 16 per cent. I want to push dialysis back for as long as I can, they put you on that when you get down to eight per cent kidney function. The average wait for a kidney is three years.

Of course I’m passionate about people being on the organ donor register. It’s also good to remember that you can be a live kidney donor. My mum was tested for me but wasn’t a match.

We hear you went on a three-month sabbatical last year?

I went on a tour of America from April to July – visiting 48 of the 50 states. I was part of a tour group of 13 people with Trek America. I didn’t know anyone when I went but I made great friends.

My favourite states were California, which had lovely weather, and Colorado, where I enjoyed doing a lot of hiking.

The only bad thing was I packed for sun and then found there was a lot of snow and rain – and camping in temperatures of -2!

I’d decided to go just two months before as I was in a bit of a rut. My job was held open here and the trip gave me clarity that it’s what I want to do.

What do you like most about being a nurse?

Working in the Emergency Department is challenging, but I love the team. Those who leave often come back!

Do you have any particularly memorable patients?

One which really sticks in my mind was a lady of 49 who had kidney disease. She loved Christmas but we knew she wouldn’t make it to the next one. So we went to B&M and got decorations, did up a side room and got roast dinners in from Toby Carvery for her and her family, including her children and grandchildren, an early Christmas. They loved it and were so grateful. It made really good memories for them.