In Conversation With... Lynn Griffiths, admissions officer for our Endoscopy team 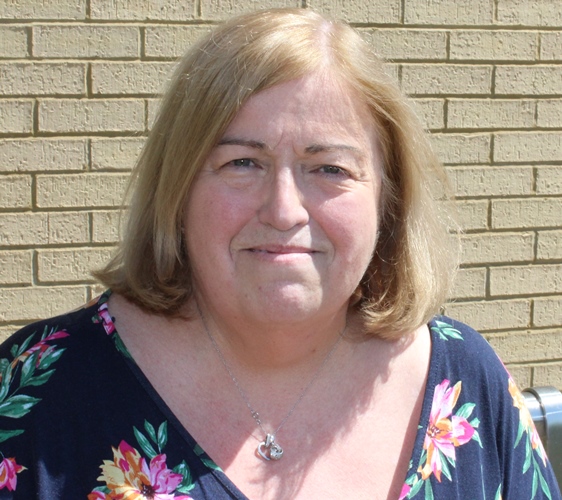 We know there are lots of very interesting people in our Trust, whether through thie work, their interests or their hobbies outside work. We want to get to know them and share their story.

So here is the next instalment of our series: In Conversation With…Lynn Griffiths, admissions officer for our Endoscopy team, who retires from our Trust this month after 46 years!

And: Lynn only planned to work at our Trust for 18 months to save up for a deposit for a house – and she’s still here four decades later!

I’m the admissions officer for endoscopy so I get patients on the waiting list, organise our lists and deal with appointment letters as well as when patients cancel their appointments or do not attend.

How did you first start out in our Trust?

I joined in 1973 as an auxiliary nurse at Oldchurch Hospital. I was 23, married, and already had my two sons. I was going to night school at the time, studying economics, history and law. One of our A&E sisters was in my class and when I said I needed to earn some money she told me to apply.

I only planned to work for 18 months so we could save enough money for a deposit for a house – and I’m still here, 46 years later!

I worked in our Neurosurgery department for six years. I did nights so I could still be home for the children in the day. I also continued to study, doing day release once a week with the London School of Economics. I’d wanted to work in accounts and law and had started my company secretary exams, but it was too much with the children.

After a few years the nights started to get on top of me so I started to look for a day job. I’ve done a variety of roles over the years, in Medical Records and on reception. I was receptionist of our sexual health clinic early on and it was very different then, I got to be really hands on and would help the lab assistant and take patients’ blood pressure.

I’ve been in my current role for 26 years. It’s changed a lot in that time and is much busier. When I started we had around 3,300 patients, now it more like 30,000. It’s had such an impact they even had to employ someone else to support me.

What’s kept you at our Trust for 46 years?

The main this is that I love the people and we have a laugh. I work with a great bunch of people - my team call me little legs because I’m so short! And I like that everything we do is about our patients.

I remember packing up all the paperwork when we moved from Oldchurch to Queen’s – I miss the windows! Queen’s Hospital is so big that some colleagues who I used to bump into regularly, I didn’t see for a couple of years when we first moved here.

There are a lot more departments now than when I first joined too.

There were no computers, it was all paper to start and we kept appointments on daily flip books. I remember the early VDU screens when we first started using computers, they didn’t do much.

When I worked at Oldchurch the clerical staff had their desks on the ward too. One time the watercooler bottle wasn’t fitted properly and leaked everywhere – I was in the middle of the ward with my thumb on it screaming for help and everyone was laughing at me!

I also made the mistake of making toast - it set the fire alarm off and five fire engines were soon at the hospital. It happened about three times in a matter of days, but only one was me.

As an auxiliary nurse years ago we used to also have a lot of involvement after a patient had died, preparing the body, as we didn’t have such a dedicated mortuary service then. I didn’t mind it but I did get a bit freaked out once. The wards weren’t lit as they are now so when we were working nights, we carried a light around with us; they weren’t very bright and cast a lot of shadows. I was working on a lung cancer patient who had just died and when I turned him over, he made a noise. I wasn’t expecting it and it did rather make me jump.

We also used to have close working relationships with other emergency services, like the police and firefighters. Some of the police officers would join nurses on their tea breaks. On one occasion they’d come in through the window of the patients’ day room. We were enjoying a cup of tea when a call came through on the radio asking for a team to come to the hospital and check out reports of suspicious people seen climbing in through a window!

It was very family-minded then and when they weren’t busy officers would sometimes even drop me home after a night shift, and the night staff used to have breakfast together before going home.

Are you looking forward to retiring? What do you plan to get up to?

I am. I’m past retirement age so I feel it’s time. I did go down to two days a week last year so that’s given me a taster and I’m not so worried that I’ll be bored.

When I first reduced my days I’d feel I always had to be doing something when I wasn’t at work, but I’m over that now. If I want to sit and read a book, I will.

Peter retired a few years ago so we’ll be able to spend more time together. I want to sort out our house and have some trips away. I’d like to go to Italy, Sicily and Croatia.

We also plan to take the children and grandchildren away and have a big family holiday next year, maybe at a villa in Spain.

And my mum is still with us, she’s 93. So I’ll be spending more time helping her out.

I will miss the people, but I’ll keep in touch. I already have a monthly lunch meeting with some of the retired girls.