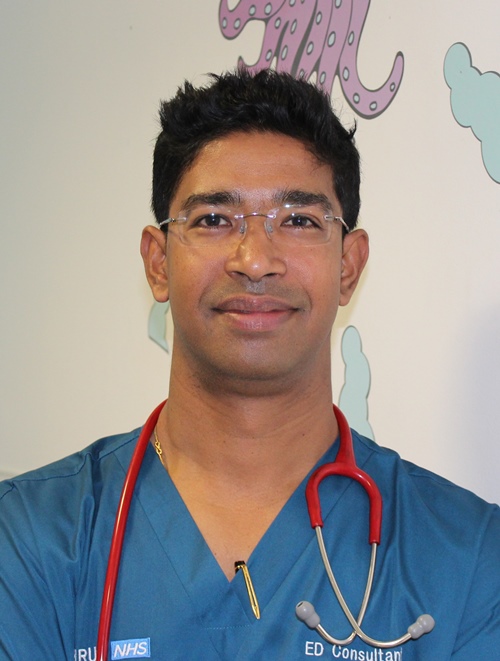 Sylvester Gomes is our Paediatric Emergency Consultant and paediatric sepsis lead. He always wanted to be a doctor - his favourite toy as a child was his doctor’s kit. And he’s a man of many of talents, he’s an advanced Salsa dancer, he also loves to travel and is even challenging himself by undertaking an endurance ‘holiday’ in just a few weeks.

Personal life: Lives with his dog Gunda (which means mafia in Indian)

And…Sylvester is passionate about the early detection and treatment of sepsis and was responsible for the launch of our sepsis protocol – the first of its kind in the country.

I’m a Paediatric Emergency Consultant. I joined our Trust in 2014 and it’s my first consultant role. I’m also the paediatric lead for sepsis.

Tell us more about our sepsis protocol

We’ve created an electronic algorithm to help us identify sepsis more easily and accurately in children. It prompts nurses to ask extra questions when a patient is being triaged, taking into account risk groups, like babies under three months.

A score is generated based on how likely it is that the patient has sepsis and the system creates an alert where sepsis is very likely.

Then we see that child as a priority and if they do have sepsis, we can administer the sepsis bundle immediately.

I started work on this in 2015, it began as a paper toolkit, and I’ve spent lots of time refining it. We started using the algorithm in June this year and so far it’s been very accurate.

The next steps are to publish our findings and validate our research with multi-centre studies, where other hospitals would trial the system. My ultimate goal is to develop a standardised system for use in all hospitals in the country.

I hope to put our Trust on the map.

Why are you so passionate about sepsis?

I’ve always been interested in sepsis. It’s the biggest challenge we face in our Paediatric Emergency Department (ED) – how we can identify a child who has a more minor illness and will get better, compared to identifying a child who will get very ill.

Sepsis can be hard to diagnose from other fevers, many of which are caused by coughs and colds. Finding sepsis in a child can be like finding a needle in a haystack as it hides in many common illnesses, that’s why you hear horror stories of parents who have lost children to sepsis.

I’m developing a profile for sepsis research and am starting a new project soon.

This year, my big purpose is that I want to be someone in the world of sepsis.

Did you always want to be a doctor?

Yes, my parents tell me the toy I played with most as a child was my doctor’s kit.

Tell us more about your career – where did you start out?

I grew up in India and trained at a Christian medical school. Part of that is that you give back after you’ve trained so I then worked in a missionary hospital delivering babies. That’s where I decided I didn’t want to go into maternity care, but I did want to work with children.

I moved to the UK in 2002 and trained in northern Ireland. That was one of my happiest times as it was a beautiful place and I made lots of friends.

My training focused on acute paediatrics as I knew this was the field I wanted to go into and it would allow me to work almost anywhere. I’ve worked at lots of hospitals, including Addenbrooke’s and Whipps Cross.

Do you see yourself staying in the same field for the rest of your career?

Absolutely, my passion has always been emergency paediatrics. It’s challenging but deeply satisfying.

I like that you can make changes to at least one person’s life on a day-to-day basis and that you can use your knowledge and skills to make an impact there and then.

And what’s the best thing about working at our Trust?

I like coming to work and I think the challenges have brought out the best in me.

Tell us what a ‘champagne diagnosis’ is?

One of our junior doctors had made an initial diagnosis about a patient which I didn’t agree with, however, when we looked at it together, I realised he was right.

So I bought him a bottle of champagne – he did well and I’ve been there as a junior doctor myself!

Every single day you learn something new.

I love travelling, I love eating so I like sampling the local cuisine and wine, and there’s the better weather of course!

Some of the places I’ve visited are Bruge, Portugal, Amsterdam, Bali, Barbados, Venice, Paris, Florence, Barcelona. Next year I plan to visit Peru.

And you’ve combined this with a love of dance too….?

When I was doing my training I walked into a club where they were salsa dancing and I thought it was beautiful. So I learned to an advance level. And I went on a salsa holiday to Cuba.

I’m also doing an endurance challenge this October, camping for five days in the Welsh mountains.

It’s a bit like boot camp where there’ll be trekking and running, and they can wake you up anytime to do something.

Is fitness important to you?

Yes. My motto this year is to be the best I can be in body, mind and spirit and exercise grounds me.

I’m working with a personal trainer to prepare for my trip next month.