In conversation with Jackie Vitti, our IT Training Team Manager 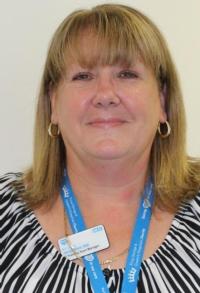 Jackie has worked at our Trust for almost 22 years and it’s her team who ensures all our staff know how to use the main systems in our hospitals. She’s also been a patient herself quite a few times in recent years – thanks to her four knee replacements!

And…loves to knit - she often makes woollen chicks for our charity at Easter!

I’m our IT Training Team Manager, a role I took on in May this year. We train our staff on all the main systems our Trust uses. We also provide eLearning and classroom courses in IT skills which can be really useful for everyone, you can book them on BEST!

How long have you been at our Trust?

Tell us more about your career

I first worked for the NHS as a PA at the Christie Hospital in Manchester. After I moved back to this area, my first role at our Trust was PA to the Pain Management team at Harold Wood Hospital.

Then I went to work in primary care before coming back in 2005 as a care records service trainer. We eventually became IT trainers and I was promoted to a senior IT trainer in 2013, then became team manager this year.

We hear one promotion led to you going back to school?

When I became a senior IT trainer I had to complete a teaching diploma so I spent two years at evening college.

I thought I’d be the oldest but I wasn’t. There were a lot of youngsters though, with grand plans for the future. There was quite a variety among us: a hairdresser, nail technician, and someone who designed computer games. We really helped each other through our coursework.

Why such a swift return to our Trust after working in primary care?

Primary and acute care are so different and I knew quite early on that primary care wasn’t for me. I found it very slow. It was quite relaxed then, though I doubt that’s still the case. I was also amazed that it seemed whatever they wanted, they bought, whereas in the Trust we were much more careful with our money.

When I saw the training job I spoke to a former colleague to get her opinion as when I was in the Pain department I’d helped a lot with the admin team as they didn’t have a manager, so they often asked for my help. She said I’d be great and should go for it as I’d been so patient with them!

What do you like about working in a hospital?

After my first hospital job I really got a taste for it, which is why I’ve stayed in healthcare ever since. I like to feel that my work is contributing to helping people.

I’ve been in hospital a lot myself and I know that the training I do is what helps the staff who help patients like me.

I’ve had three and a half knee replacements! Two were in one leg and one in the other, as well as a partial knee replacement. The majority were done at Basildon Hospital. My last operation was at the Royal National Orthopaedic Hospital, a specialist centre and I would recommend that to anyone.

What’s it like being a patient when you work in a hospital?

It’s strange being on the other side, and you do take notice more. I find that once the staff know you work in a hospital, they treat you differently.

Last year, my step-son Warren, 51, had a serious motorbike accident. It was touch and go for a while and he nearly lost his leg.

I was visiting him at Basildon Hospital and when I saw the nurse about to hang blood for him without checking his wristband or asking his name, I had to say something. Although she knew it was Warren, she wasn’t following the correct procedure. In this case it was fine but some patients, such as dementia patients, could swap wristbands. You always need do the proper checks. Warren said the minute I left she asked who the hell I was!

You don’t look old enough to have a 51-year-old stepson!

I have two step-sons, Warren and Dion, 50. My partner, Bert, is 74. We met through friends after my divorce. We both said we didn’t want a serious relationship, but we’re together more than 20 years later!

We’ve got a big family between us, my daughter Elizabeth has Billy, seven, and Scarlett, four. Bert’s got four granddaughters and three great-granddaughters, the youngest, Elsie, was born just last week.

It’s Scarlet’s first day at school this week too so we’re going to see her off – she’s really excited and can’t decide whether to wear her pinafore or school dress!

My other daughter Clare works for the Ministry of Defence and spent three years in Washington – she visited every American state while she was there. We did a big trip in 2016 as one of Bert’s granddaughters was getting married in Vegas. We also went to New York and did a road trip through San Francisco into Los Angeles.

Clare’s back in the UK now and is planning on adopting a child next year.

You must have a very busy house?!

We did when they were younger. It’s about to get busier again as my daughter, Elizabeth, her husband Daryll and the two children are about to move in with us to save up for their own house.

I don’t. I think we have a big enough family already!