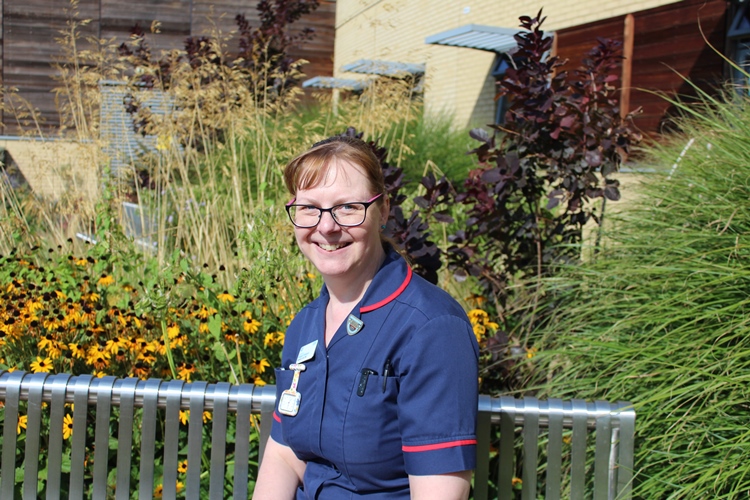 Ahead of our next death Café, which will be held at King George Hospital next Tuesday (10 December) from 11.30am to 12.30pm, we spoke to Bridget D'Aliessio, a palliative care clinical nurse specialist (CNS) at our Trust.  Death Cafes, which are held monthly at our Trust, led by Gemma Norburn from our Mortuary team, are an open forum for people to discuss death while enjoying a cup of tea and a slice of cake. They aim to help people become more comfortable talking about dying.

Bridget was curious about them, and first went to one in April. Now, as part of her role in our Palliative Care team, she is helping to facilitate them. Anyone is welcome to join us for our Death Cafes, so why not come along and join the conversation?

Lives: In Hainault with husband Marino, a clinical engineering manager at our Trust

And: Bridget loves to sing – she even got Marino to join her in a Kenny Rogers and Dolly Parton duet at their wedding blessing!

It was very different when we moved to the current King George Hospital, going from the open Florence Nightingale style ward to bays.

I also worked on an acute admission ward, which started on a trial basis, where I worked up to senior staff nurse, then I got my first sister post in 1997. I remember it really clearly as I was having pictures taken in my new uniform for my family on the same day that Princess Diana died.

I moved to Iris ward in 1999 and became ward manager there. I stayed until 2007, which was when I moved into palliative care.

Personal experience, such as my grandad and uncle dying, and me being quite an emotional person, had sparked my interest and I wanted more job satisfaction.

We’d also piloted the (now controversial) Liverpool Care Pathway when I was on Iris ward, so I’d become comfortable having difficult conversations and giving bad news to patients and their families.

End of life care is a small part of what we do. We give a lot of emotional support to families, as well as our patients, and we help to control their symptoms.

I’m in a privileged position, often patients will share things with me that they feel they can’t with their families. I find that humbling. And I enjoy making a difference, which in some cases, can be thanks to really small things.

A lady I was looking after recently only had a little time left, and she had a really simple request – she fancied a cup of Bovril.

Sometimes you can get a real soft spot for a particular patient. Years ago I looked after a patient called Jean West, her granddaughter Abbie was just six at the time – she’s 27 now and I built such a relationship with the family that she was my bridesmaid.

What else are you passionate about?

I love inspiring others to work in the NHS. I’m an ambassador for the Step in to the NHS programme, I work with our Education team to give talks on nursing careers and attend school career fairs.

I also took part in a Learn Live nursing broadcast in June which had 6,000 students following and asking questions online.

And I’m a mentor, helping others with their development into CNS posts. When a mentee achieves something, I feel like a proud mum!

Can you tell us more about your involvement in our Death Cafes?

I was very curious when I first heard about them. I started reading Gemma’s blog (Norburn, from our Mortuary team who runs our Death Cafes) and went along to one of Gemma’s in April this year.

I didn’t say I was a nurse at the first one, as I wanted to listen and take it all in. Then I went again when we held some in our hospitals for Dying Matters Week.

Now our Palliative Care team are helping to facilitate them as they’re held monthly at our hospitals.

I understand they may not be for everyone. But they’re important to break down barriers and reduce our fear around death. While death of course can be sad, it can be positive too.

It’s about breaking down one of our biggest taboos head on and the name really does what it says on the tin.

They’re about anything and everything related to death and dying, including discussions about pets, poetry, or what to do with a loved one’s ashes.

I find they can be really light-hearted, and fun.

You and Marino recently got married – we’ love to hear you BHR love story!

I first clapped eyes on him in 2002 when I was ward manager on Iris ward. He said something which made me blush and I covered my face, but he told me he could see I was blushing as my neck was all red too! We went on our first date in August that year, and moved in together in 2005.

We’ve been together for 17 years and got married last November. We went to Gretna Green, just the two of us – only a few people knew about it. Then we had a blessing and reception with everyone at home in February.

He proposed in 2013 – in Southend on a cold April day. We had pie and mash and a cup of tea to celebrate.

What do you like to get up to outside work?

I love karaoke and my team say I can carry a tune! I encourage everyone to get up with me. Dancing Queen is my classic and I want that played at my funeral.

Me and Marino are quite different. I’m very outgoing and I asked him to do a Kenny Rogers and Dolly Parton duet at our blessing. He said no but I got him to do it after a few drinks!  We balance each other out so it works well.

And of favourite question of In Conversation With….do you have any pets?

We don’t, but we do dog sit for a friend. She’s got a staffie, Lola, who’s 13. Marino makes out like he’s not bothered, then I find him taking loads of cute pictures of her! He’s the soft one and I’m the disciplinarian.