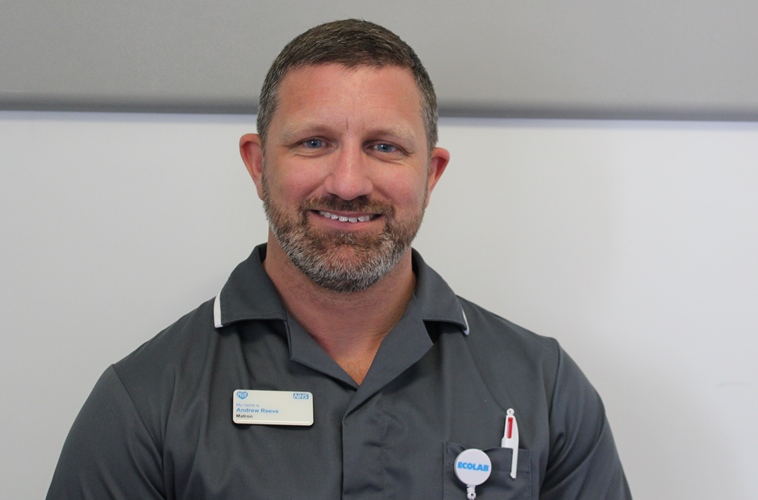 This week we spoke to Andy Reeve, Matron for General Surgery, about his feelings on being a male nurse (and why there aren’t more), his former career as a postman and his interesting hobby creating everything from clocks to toy kitchens from wooden palettes!

Lives: Andy lives in Maldon with his wife

And: Aside from his career in nursing, Andy also spent three years working as a postman, meeting his former PE teacher on his round!

Tell us a bit more about your role in our Trust

Being the Matron for General Surgery is a really varied role. It’s good because you get to do a bit of everything. There’s managing people, quality and safety work and you can also be as clinical as you like.

I like to still be hands-on with patients as it helps you get a feel of things and how your staff and patients are feeling. I was recently feeding a patient; the nurse was ready to take over, however, I’m a nurse myself and more than happy to get involved.

You’re one of few male nurses in the Trust, and the NHS, how did your career come about?

My mum was a nurse and so was my uncle, so it was never strange for me for men to be nurses. You probably wouldn’t think I was a nurse if you saw me in my civvies, I’ve been told I’ve got a hard exterior, but I’m in a really caring profession.

I knew I wanted to be in healthcare when I left school, I wasn’t very academic but caring for people comes easily to me. I did a GNVQ in health and social care and then trained to be a paediatric nurse.

However, I didn’t apply myself enough and got behind so I took some time out to catch up, and I never went back.

I started work as a postman and did that for three years. I really enjoyed it as it was all about people, and I can talk the hind legs off a donkey. I found my old PE teacher was on my round.

Then I went back to university and started my nurse training from scratch, however, this time, I took my mum’s advice and did adult nursing rather than paediatrics as that’s quite specialised.

I applied myself more and passed. I’d worked in a bar while studying and just as I qualified they offered to send me on a trainee manager course, I enjoyed working there but I couldn’t blow off three years of nurse training. So I started working at Barts in coronary care in 2006.

I quickly learned I was interested in the critical care side of things so I went to King’s College Hospital to do my critical care training, and that brought me to our Trust.

I started in 2011 in critical care and worked my way up to interim manager, then led critical care outreach, before taking on my current role.

Why do you think there are still so few male nurses in the NHS?

It could be that it’s not plugged that well; or public perception. I think it’s historical. I find it weird being called a matron as that’s definitely a female term but there’s no equivalent.

When I played rugby my nickname was nurse, however, newer guys on the team had no idea it was because I actually was one as it doesn’t go with such an aggressive and rough sport.

I’m proud to represent male nurses and am passionate that it’s a profession, not just a vocation. And I’m proud to work for the NHS.

I love that it’s so varied, as I’m not one to sit around writing reports all the time. And I love the people.

It can be a challenge. I think people are also the biggest variable; the public have very high expectations of us, as we do of ourselves. However, it’s the most rewarding job.

Tell us about one of your most memorable patients

Normally I don’t let patients get to me, you can’t. However, I really remember one guy in critical care. He was out walking his dog and it pulled him over a small wall, he severed his spinal cord and was quadriplegic.

In critical care, you often look after the same patient for continuity and I really built up a good rapport with him.

Obviously he couldn’t shave, so on Christmas morning I went in early before my shift and gave him the full works, a proper hot shave. I brought his hand up to his face afterwards, as he’d got back a little sensation, so he could feel it. He said it was beautiful.

I don’t know what it was, but he really got to me.

We’d love to know about your unusual hobby…

I make things out of wooden delivery palettes. It started when me and my wife were out walking one day and saw one outside a house. It had a sign on saying ‘take me’, so we did. It was 6ft by 4ft so it was a bit of a ‘to me, to you’-style comedy act on the way home!

I made a gate with it. Since then I’ve made lots of different things, clocks, trays, miniature cricket bats for table numbers for a friend’s pub, one of the biggest things was an outdoor play kitchen for a friend’s son. I’ve been asked to make a garden bar so that’s my next big project.

I get lost in it and it helps keep my busy since I had to give up rugby when I had a disc prolapse in my neck.

And our favourite question of In Conversation With…do you have any pets?

We don’t but our neighbours’ cat, Daisy, did adopt us. She’d go home to sleep and then come and spend the day with us, and we’d feed her. That went on for about five years until she died last year. They’ve got three kids so I think she came to us for some peace and quiet. They’ve got three new kittens now, so we’ll see if any of those come over the fence…