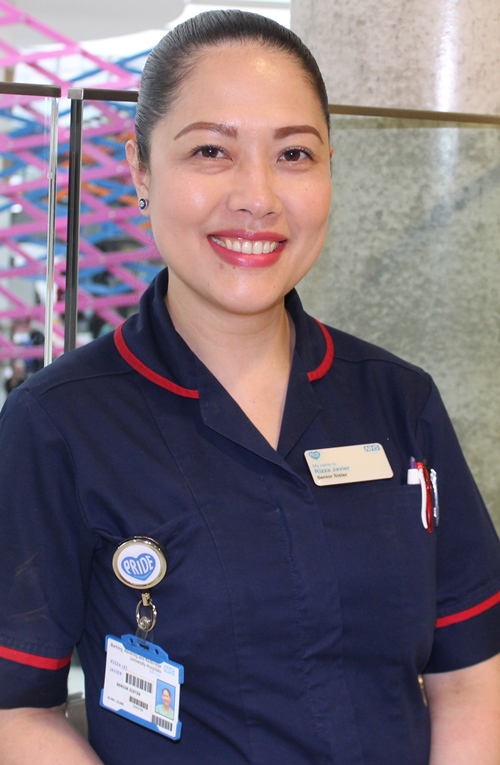 Did you know that we have 334 colleagues in our hospitals from the Philippines?

So it was important that we marked Philippines Independence Day this week. We had colourful stalls offering local food with staff in traditional dress at our hospitals. And we also spoke to one of our long-serving Filipino nurses, Rizza Javier for this week’s In Conversation With interview.

Rizza, who joined us in 2012, is our senior sister on Fern ward at King George Hospital. She tells us what inspired her to be a nurse and why she moved to the UK in 2005.

Lives: In Dagenham with husband Alvin and son JJ, eight.

And: Before achieving her dream of becoming a nurse, Rizza had a glamourous career working as a fitness consultant for a global company.

Happy Independence Day! How will you celebrate?

I’ll be celebrating with my family and friends. The main highlight of Philippines Independence Day is the police and military parade in Manila headed by our president, followed by a speech and 21 gun salute. It’s marked by a fiesta (feast), holy mass, parades and concerts.

I helped to organise the stalls at our hospitals and I didn’t realise how many Filipinos there were in our Trust till I did this - there are over 300!

I’m still friends with some of the nurses I came with when I moved to this country, they’re like a family and we support each other.

An agency came over from the UK to recruit nurses and a colleague on my ward asked me to go with her for support. So I did, I had an interview and passed and ended up moving here.

I think it was fate and as the process to move here was quicker than the US, that swayed us - I was on the ward within three months of my interview.

It was a good time for us to move; I had a miscarriage so it was a nice to have a fresh start. Family is everything in the Philippines so it helped to get away from people asking me about having a baby.

I moved in 2005 to work at the Royal London Hospital. My husband came over to join me a month later.

I came to our Trust in 2012, after I had my son and I was keen to work closer to home. I started as a junior sister on Fern ward and have worked my way up.

Had you always wanted to be a nurse?

Ever since I was a little girl, nursing was something I wanted to do. I love learning new things and healthcare is a respected career in the Philippines. I have a desire to save lives, care for and comfort people.

I went to do my training straight after school. I enjoyed it, although it was challenging, but I am very determined when I’m passionate about something.

I graduated in 1997. I didn’t go straight into nursing; I moved to the city and stayed with relatives. My aunt was a fitness consultant and as my nursing studies had been so intense, I decided to try doing the same for a bit. It was still linked to healthcare, and I knew I would always go into nursing eventually.

I worked at Slimmers World International for three years, combining principles of fitness and nutrition to help people achieve their goals. It was very glamorous!

I started work as a nurse in 2000 when a big nursing boom began in the Philippines and there were lots of opportunities. I worked at a private hospital for five years before moving to the UK. We rotated every two years so I worked in different specialities, including medical and surgical, oncology, paediatrics and gynaecology.

What was it like adapting to life in the UK?

I moved in August and at first I liked that it was cooler than home – then it got really cold! We have two seasons in the Philippines, wet and dry and each last six months. It’s tropical, so the average temperature is between 26 to 34 degrees.

And the accents! I worked at the London Chest Clinic and as it’s a specialist in respiratory we had patients from all over the country – I’d never heard some accents, from Newcastle, Scotland, Ireland and Liverpool, I spent a lot of time saying ‘pardon’ at first.

Overall I think I adapted quite quickly and I’ve always had lots of support. The homesickness is there – it always will be – however, I see the UK as my home now and the Philippines my second home.

We try to get to the Philippines once a year if we can, we last went in December.

You’ve always worked in care of the elderly at our Trust – what drew you to that?

Growing up in the Philippines the culture is that we have strong family ties and are brought up to care for and respect people of all ages, but especially for our elders. We look after them, so it felt right to me.

Working with older people can be challenging, however, the reward is worth it. I’m passionate about making a difference.

Some of the things I have done at our Trust that I’m most proud of are making our ward dementia friendly and our continued improvement. I also worked closely with our charity to get RITA (Reminiscence Interactive Therapy Activities) screens at our hospitals.

Our patients can be confused so communication can be challenging. Engaging them with activities is really important.

I love getting to know our patients and find that with their experience, I can learn from them, such as courage in the face of adversity, laughter is a great medicine, and to make time for what’s important.

They have a wealth of knowledge to share and lots of time to just do that. Their tales are like a hidden time machine, taking you back to simpler era, it's fascinating to discuss.

It’s so rewarding to see their journey, from admittance to discharge, knowing you’ve made a difference to improve their health, wellbeing and overall quality of life.

What do you get up to when not at work?

I spend time with family and friends and I love to travel. I recently went to Geneva to support a friend who was running a half marathon, and we’re going to Australia this summer to visit my sister and her newborn baby.