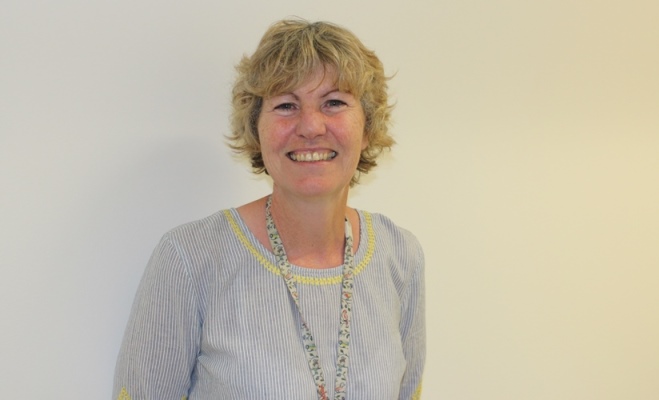 This week we spoke to Sally Kelsey, our lead nurse for sexual health and contraception.

Lives: In Hornchurch with husband Paul, 59, with whom she has two daughters aged 30 and 27.

And:  In her spare time Sally loves performing – she’s been everything from a nun to a witch and often pops up in panto (oh yes she does!)

You were almost lost to nursing after starting office work – what made you change your mind?

I’d thought about becoming a nurse when I was at school, however, I was put off by the thought of shift working. My parents didn’t want me to do it either as they thought it would be hard and with long hours. So after college I worked in the offices of two computer companies.

However, I didn’t feel fulfilled. I realised that I loved meeting people so I applied to our Trust for nursing training.

I went travelling first, going all around Europe including France, Italy and the Netherlands. My husband Paul, my boyfriend at the time, was with me for the first few weeks then he went home and I carried on.

I started my training at Oldchurch Hospital in 1983 and it was very old fashioned. I really enjoyed it. I lived in the nurses’ house to start with, moving out when I got married.

There were 30 of us on the course and there was a great sense of support. We took on a lot of responsibility very young, we were in charge of wards at night in our second year of training.

I first worked on ward E1, an acute, medical and cardiac ward. Then I worked in A&E and I really liked it – it was the only place I ever enjoyed working nights! Having a tight-knit team helped. However, after I had my children I found it a bit much.

A friend was doing a family planning course and advised I do the same. It was ideal as it would mean I could do three-hour sessions and work around my family.

I was based in community clinics and GP surgeries giving advice on family planning and contraception, working for the then Primary Care Trust (PCT). In 1998, I became the manager of community family planning.

I was TUPEd back into the Trust in 2008 when sexual health and contraception services were integrated. It was unsettling at first because you had to get used to working together in new roles. However, working as one team was much better for staff and patients in the long-run. We were much less isolated.

I’ve been very well supported in further training and education here. After doing a degree with the Open University in health and social care, I was funded to do a Masters in sexual health.

Tell us more about your day-to-day role

I give sexual health and contraception advice to our patients. The role has changed a lot over the years; I started out just giving out pills and helping the doctor, however now we do almost everything, including prescribing, fitting devices and follow-ups, it’s much more satisfying.

We work with vulnerable people too, those who have been sexually assaulted or who have been victims of people trafficking or exploitation. Depending on their circumstances, we could be the first person they see.

I’m also involved in staff management and service development. And I offer in-house training, as well as external training.

It’s very varied. I like the contraception side best as it’s my comfort zone. And I’ve always liked the people, staff and patients.

It’s nice working in my local area as I know people and we have a very diverse population so there are different challenges. It’s never boring!

I also like that in my role now most of the patients I see are well and looking to protect their health. There’s lots of health promotion in our role.

I’ve never really wanted to be anything other than a nurse. Nursing is all about people, treating others as you would want to be treated and having respect for them. It’s a different type of nursing now than when I started, however, there are lots of different types of nursing these days.

Have any of your patients been particularly memorable?

I’ve had lots over the years and even remember some from my very first ward. They stick in your mind when something resonates with you.

I remember one girl of just 18 who’d had a major stroke, I think it resonated as she was near to my own age. She did recover, however, she lost her sight.

What do you like to get up to outside work?

I love gardening. I’m also into acting and am part of a local drama group, Ad Hoc. I’ve done lots of panto and Shakespeare plays. I’ve played a nun in the play Agnes of God, and a witch in Macbeth. I love to do anything, I just don’t sing and I’m not very good at dancing!

I started acting at college but stopped when my girls were young. I started up again when they were a bit older, it’s good fun.

We’re currently rehearing a play about dementia to help raise awareness, it opens in September. We perform all over, often at Brentwood Theatre. We regularly act out murder mysteries too.

I still get nervous when I first go on, but after a few moments I’m in the swing of it.

We also love to travel. We’ve been to Peru this year and Argentina is on my bucket list. And we’ve travelled around the Orkney Islands in a camper van.

And our favourite question of In Conversation With…do you have any pets?

We have a grand-kitten! One of my daughters has got a 10-month-old kitten, Mittens, and we all adore her. She’s totally spoilt!