In Conversation With...Sally Greig, a physiotherapist who helps to keep our staff fit and healthy 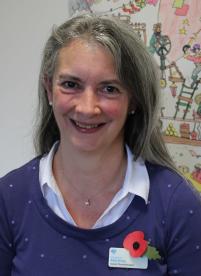 For In Conversation With… this week we spoke to Sally Greig, our senior occupational health physiotherapist and one of the key people helping to keep our staff fit and healthy.

She retrained to be a physiotherapist when she was made redundant aged 33 – before that she’d working in banking, as a McDonald’s manager and was the first female special constable to serve in the Honourable Artillery Company.

Lives: in Hornchurch with her husband

And: Sally loves skiing and scuba diving – she’s qualified to an advanced level in scuba diving and partakes in her hobby all over the world.

I’m a senior physiotherapist in our Occupational Health department, looking after all our staff, including our Sodexo colleagues and volunteers, to help keep them healthy and in work.

I’m proud of our Trust as it’s quite unusual to have a full-time physiotherapist specifically to help support staff. We’re also starting to look more at prevention and how we can make adjustments to reduce the risk of injury.

I’ve been here as a physiotherapist for 15 years and in my current role for the last four.

Tell us a bit more about your career

I came to physiotherapy quite late, retraining when I was 33. I hadn’t been sure about what I wanted to do when I was younger - I loved horse riding so I wanted to turn that into a career at one point!

I left school at 16 and worked for private banks. It was a bit boring so I went to college and did a course in hotel and catering management and after that I worked at McDonald’s on a management training programme.

It was very challenging as I had to manage a whole shift with 45 people. I was 21 and I found that a lot of the younger guys didn’t like me telling them what to do!

I stuck it out for a year and then went back to banking, working as a PA to the managing director which was good fun.

While there I trained to be a police special constable. I did all the police training and had a passing out ceremony at Hendon. I did it in my spare time, after work and at weekends. It was challenging, eye opening and fun!

Mostly I did patrolling but I also helped clear out a rave of hundreds of people and went on a few drug raids. I saw a different side to life and loved the camaraderie.

It was as a special constable that I became the first woman to serve with the Honourable Artillery Company (HAC), one of the oldest territorial army regiments in the country.

When the bank was taken over I decided to take redundancy and retrain as a physiotherapist.

Why did you decide to do that?

It was something I’d considered when I was younger. Then one of my colleagues at the bank was taken ill and was in rehab. After talking to them about their treatment and physiotherapy I decided to go for it.

I did an access course, which was terrifying, and I cried when I did my first essay as it was so long since I’d written one. I got into Brunel University and there was only one person on the course older than me. It was hard but I love learning and I learned so much about how the body and brain work and how emotions can physically affect us.

After university I worked in Epping Forest for about a year before joining our Trust. I’ve done most of the rotations here and was working in the community before I started my current role.

I enjoy seeing people in their working environment. I’ve been to some weird and wonderful places. Recently I went to see our pharmacy production team, and I’ve been into theatres – I was surprised by the weight of the equipment.

I love working here. It has its challenges but I’ve been lucky to do lots of different roles which have taken me out of my comfort zone. I’ve also been supported to do extra study which I really enjoy.

I’m passionate about working for the NHS.

What are some of the most common injuries you see?

Shoulders and back are the most common areas. We’ve had people hurt themselves falling off chairs, and when moving patients. I injured my shoulder myself when a patient went into spasm as I was moving them.

But mostly they’re caused by problems which build up over time. Sometimes there can be really simple solutions which I can spot when I go out to see how people work – like simply raising a bed a few inches higher.

Do you have any particularly memorable patients?

One lady who was off sick when she was referred to me and had been told she should cut her hours or leave work.

I worked closely with her, her manager and HR, giving her tailored exercises. That was almost three years ago and I was delighted to bump into her recently. She’d not had a single day off sick since and was not only still in work, she’d switched to a more demanding role.

What do you like doing in your spare time?

I’ve been with the Havering Singers for six years. We rehearse weekly and do four concerts a year.

I love skiing and go most years – I’m going to Switzerland next year. And I’m qualified to an advanced level in scuba diving, which I’ve done all over the world. I love to travel and have dived with whale sharks in the Maldives.

And our favourite question of In Conversation With…..do you have any pets?

I don’t have at the moment by I’m from a family of animal lovers and grew up with quite a menagerie – cats, rabbits, dogs, guinea pigs and a tortoise!