In Conversation With...Karen Peters, one of our Red2Green Transformation leads 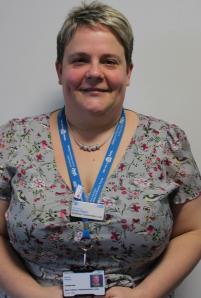 Here is the next instalment of our series: In Conversation With…introducing Karen Peters, one of our Red2Green Transformation leads.

Karen followed in her mother’s footsteps in becoming a nurse but it wasn’t in her original plan – she’d intended to be a maths teacher! Despite that Karen has had a hugely eventful career in nursing, including spending 14 years solely working night shifts. She’s been our bed manager, our bed and site manager and now, as part of our Red2Green team, she’s helping to ensure we make each day in hospital count for our patients.

And: Karen is our second interviewee (after Caroline Moore) who never planned a career in nursing and wanted to teach instead!

Me, and our other Red2Green Transformation lead, Paul Thorp, are responsible for embedding Red2Green across our hospitals. We set up the project and now it’s about ongoing maintenance, ensuring our wards are following all the principles.

It’s about making every day count for patients and getting them home as soon as possible. A lot of our work has been to ask questions, challenging the way we do things to see if we can make them more efficient.

It’s the best job ever!

Has it been hard questioning your colleagues about the way things have always been done?

It’s actually been easier than I expected, people have been really open to change. I think a lot of that’s due to support across our Trust and from our executives.

Having built lots of relationships during my time in our Trust has also been a big help.

You’ve worked at our Trust ever since you qualified as a nurse – what roles have you done?

My first job as a nurse was on D2 ward at Oldchurch Hospital. It was an acute medical ward and was very busy with lots of admissions. People said if you could survive D2 you could survive anything, and it was true! I loved the busy pace and there was a real team feeling, I stayed for nine years.

I was a night nurse practitioner when I had my first son, then I joined our Bed and Site team in my first clinical site management role, which I loved, reviewing sick patients on our wards.

I was involved in the move to Queen’s Hospital. The first week was awful, no one knew where anything was! Running the night shift was really daunting. I was ill too and after dragging myself in for five days, ended up as a patient with diarrhoea and vomiting.

One of my most memorable night shifts at Queen’s was when the Pathology roof collapsed, causing thousands of pounds of damage. The macerator, where we emptied the bed pans, was blocked.

Then there was the time the fire brigade had to be called when a patient managed to get up the spiral staircase to the roof.

I became bed manager by being called to resus, given a phone and folder and told I was doing it from the next night! It was a baptism of fire but I coped by learning from others.

In 2014 I went back to working days after 14 years on nights and was Bed and Site Manager, before becoming Patient Flow Lead in 2016. Last winter was the most challenging I’ve seen.

I’ve also qualified as an advanced life support instructor and really enjoy training. Education is my bag and takes me back to my old teacher role.

Yes, we hear nursing was never in your career plan…

I had it all mapped out, I was going to be a maths teacher. I planned to do a computer science degree, but I didn’t get the grades in my A-levels. I wasn’t surprised but it was devastating.

My mum was a nurse and she said it was a job for life and encouraged me to give it a go. She didn’t think I’d last through the training, however, but she is really proud now!

What makes your current role the best job ever?

I was frustrated in former roles that I couldn’t make the changes I’d like to. This gives me that chance.

It also helps that I understand the pressure everyone is under. Setting up this project from scratch with Paul is what I’m most proud of, especially now the team is growing. We’ve been allowed to run with it and that trust in us to do a good job means a lot.

I’m passionate about working for the NHS. Doing the best for our patients is what motivates me. At the moment we’re in a difficult situation but we’ve got to do the best we can and work smarter.

We’re busy, but it’s the people that make it what it is. I’ve heard many a registrar say it’s terrible when they first join, then when it comes to leaving, they don’t want to go!

Knowing our Trust as well as I do I feel I can make a difference. I’ve got the battle scars and been through it with people, and that really helps when you suggest making changes.

Some of your team tell us that you can be misunderstood?

People used to be scared of me, particularly when I was Bed and Site Manager. I think some that don’t know me well still are.

It’s possibly because when I get passionate I get loud and I can’t tolerate poor care or any form of laziness. I like straight talking and don’t beat around the bush – but my bark is worse than my bite!

What do you get up to outside our hospitals?

I love socialising and spending time with my family. Mainly it’s my kids that keep me busy. My eldest competes for England in karate so I spend a lot of time shipping him up and down the country for competitions.

I’m also a bit of an IT geek and love gadgets.

I got my husband a tropical fish tank for Christmas, and I find myself talking to the fish every night!