In Conversation With...Ernesto Antonio, our theatres charge nurse who had a heart transplant 19 years ago! 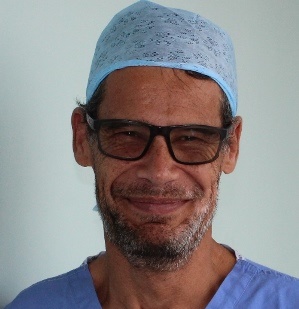 Ernesto Antonio is a charge nurse in our theatres. He’s worked at our Trust for over 30 years and even met his wife Kate when they were both working in one of our hospitals.

Personal life: Ernesto is a widower, wife Kate died of breast cancer in 2016. Their daughter, Isabella, is 24. Ernesto lives with his dog Frodo (yes named after the hobbit!)

And…he had a heart transplant 19 years ago. He was also named ‘Athlete of the Games’ in the European Transplant Games in June and is taking part in Swim Serpentine, completing the two-mile open-water swim, this weekend (Saturday 22 September!)

I’m a charge nurse and run our emergency theatre, coordinating all our emergency procedures. I’ve been doing that for seven years but I’ve been at our Trust for 31 years.

I’m originally from Ireland and was visiting home with my family, my wife Kate and Isabella, who was five at the time, when I got extremely unwell quite suddenly.

I had multiple organ failure and needed a heart transplant. Two became available which were not suitable and I was extremely lucky there was a third which was suitable – it was close, if I didn’t have the transplant that day I wouldn’t have survived.

Recovery was slow, I was in hospital from August to January and it meant my family had to relocate to Ireland and we had to get my daughter into school there.

Does that mean being on the organ donor register is important to you?

Extremely. I was on it before my transplant but it’s even more important to me now. I think it’s important people put themselves on the register if they do want to donate their organs, as that means their family doesn’t have to make the decision after they die.

Tell us more about taking part in the transplant games (we must point out that Ernesto was very humble about his achievements – we had to drag them all out of him!)

I took part in the European Games in Italy in June. I won the 100m breaststroke, 1,500m and 400m sprint and took bronze in the road race and silver in a virtual event where they combine the 1,500m and road race events.

They also named me Athlete of the Games and presented me with a trophy. These are held every two years and I’ve competed every time since 2002.

I’ve taken part in the annual British Transplant Games several times. They were held this August and I won gold in the 5k walk, silver in the 800m and came fourth in the 400m event.

Did your fitness become more important to you after your transplant?

I’d always been fit and cycled a lot but I never ran before my transplant.

After I had my transplant in August, I didn’t even stand up until that December! When I left hospital they encouraged me to be as active as possible but it was a very slow process.

I started running in 2004. I like being active and I’ve done lots of marathons over the years.

How does your sporting success feel, given you’ve had a heart transplant?

It’s fantastic and is a tribute to my donor and their family.

Okay, so tell us more about your career, we hear you’ve not only saved lives working in a hospital…

I did my nurse training at home in Ireland and was on a weekly contract when I finished. Then I lost my job. I ended up working as a lifeguard at a swimming pool.

There was nothing in Ireland at the time so when a trust from Kent come over on a recruitment drive, I went.

I worked in Orpington Hospital for a year before coming to our Trust in 1987. I did a post-basic theatre course and have stayed in theatres ever since. I’d really enjoyed my theatre placement during my training, and I’d worked in theatres and emergency departments after I qualified so that gave me an interest.

What made you want to be a nurse?

My mum was a nurse. My little brother had down’s syndrome so I was going to be a nurse for young people with learning difficulties, but then I got a general nurse training place so I went with it.

And you met your wife Kate at our Trust?

Yes, we met when we were working at Oldchurch Hospital. Kate was the theatre sister before she moved to private practice in 1993.

The thing I am most grateful for thanks to my transplant (besides being around to raise my daughter), is that it meant I was here to care for Kate when she was ill. Everything else pales into insignificance.

How do you feel about retiring?

I have mixed feelings! I’ll miss the camaraderie and caring for patients but there’s too much out there to see and do and I want to be fit enough to do it! There are only two heart transplant patients in this country who have lived for over 30 years post-surgery, and I’m coming up 20 years. That makes you live in the moment more.

I’m also planning to do the Camino de Santiago pilgrimage next May. It’s about 800km from the French Pyrenees to Santiago de Compostela in north western Spain, I think it’ll take about a month.

Yes, my dog Frodo. He’s recently had an operation himself to replace a knee ligament. Someone had re-homed him and then gave him to me when he was two.