In Conversation With... Sue Williams, who kept our executive office running smoothly for 17 years! 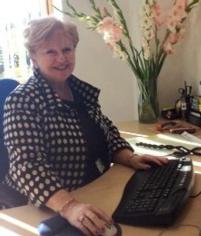 Here is a special edition of In Conversation With… introducing Sue Williams, Executive Assistant to our Chair and Chief Executive, marking her retirement on Wednesday 31 October, after 17 years at our Trust.

Personal life: Lives with husband Cliff, 67. Between them they have two sons, Mark, 43, Gary, 40, and daughter Emma, 28. They also have five grandchildren, four girls and one boy ranging in age from three to 20.

And: Sue is an accomplished shooter – scoring 48 out of 50 in her first lesson!

What’s your role at our Trust?

I look after our Chair and Chief Executive so I’m responsible for briefing them, juggling their diaries and basically dealing with everything that comes in. I also get involved in complaints and manage all our executive PAs.

It’s different every day and very busy – we’re the office that everyone comes to!

Tell us a bit more about your early career – how did you get started?

I went straight from my A-levels to working for NatWest Bank. I regret not going to university but I was keen to get into work.

I left that for a marketing job which was much more exciting. I dealt with lots of PR companies and advertising agencies and arranged conferences here and in Europe. I loved the job but was made redundant after three years.

I got my first taste of being a PA working for Sir James Goldsmith. I was there to help him launch Now, a political magazine, and I helped out his PA too. It was really interesting but he closed the magazine after a couple of years.

A former colleague then asked me to help him set up a courier company. In between jobs I’d worked on Fleet Street, editing publications like Nursing Weekly, so I’d made a lot of contacts which we used to set up the business.

Just before we were about to launch he died following a skiing accident. So I bought out the company, putting my house up as security, and ran it myself for eight years and loved it.

How did you end up working for our Trust?

I sold my company when I married my first husband in 1988. After I had my daughter Emma I wanted to work locally so I went to Ford.

That was where I met Terry Williams, who was a director. He went on to become Chair of our Trust and he asked me to come and help him for a couple of weeks – and I’m still here 17 years later!

What has made you stay so long?

The people mostly, and the cause. It gives me real satisfaction to help people.

I came from the private sector and it’s a different world – I found the culture in the NHS difficult at first, decision-making was so slow! In previous roles we’d have been locked in a room until we’d made a decision or come up with a solution! The NHS is very different.

I’ve had a good relationship with everyone I’ve worked with – there has been six chief executives and ten chairs over the years. I’m still in touch with some of them.

Your role is at the heart of the leadership team in our Trust - what’s your most important skill?

Being adaptable! Everyone works differently and ours is a large and complex organisation which is not easy to navigate, so part of my role is helping new executive teams to settle in – I’ve been told I’m the mainstay of the Chief Executive’s office!

How do you feel about retiring and what are your plans?

I’m nervous. I didn’t feel ready before but I think now is the right time to spend more time with my family and travel. We’ve got a cruise booked next March to lots of destinations including India, Dubai, Singapore and Abu Dhabi.

I’m also going to join my twin sister Diane by volunteering for the Herts and Essex Air Ambulance. The air ambulance saved my ex-husband after he had an accident on the motorway so I want to give something back. Diane has been volunteering for 14 years.

I’m excited about retiring but I’m really going to miss the people.

Our second set of In Conversation With Twins (following Alexia Young and her sister) – are you identical?

We are – I’m ten minutes older. People are sceptical of the twin-link thing but it’s true. I often know something is wrong before I call her and I sometimes even look in the mirror and see Diane rather than me!

I was on holiday years ago when she was pregnant. I got terrible stomach pains, when I got back to my hotel there was a message that Di was in labour!

What are some of your proudest achievements?

I organised the naming ceremony when Princess Anne opened Queen’s Hospital, I also worked closely with the Department of Health on our Trust’s application for university status.

I’ve been employee of the month and the Executive Office team was nominated for a PRIDE Award, which meant a lot as we were put forward by a colleague. I was also nominated to go to a Buckingham Palace garden party which was lovely.

And I managed the Communications team for a couple of years, which was fun, especially as I’d once wanted to be a journalist. At the time we produced a monthly printed newsletter. I decided to make it weekly and do it online – it was an early version of the Link!

What are your interests outside work?

I’m a sports fanatic and very competitive! I do clay and target shooting, I’m the only woman in the dug-out at Colchester range. I’d always fancied it so I had a lesson and hit 48 out of 50 – the instructor said I was a natural.

I also love Formula 1. I’ve been to races and walked some of the circuits. I’m looking forward to visiting the one in Abu Dhabi on our cruise.

We’ve always had dogs but our last one died a year ago. We’ll get another one now I’m retiring, but it’ll be a competition with my husband as to what breed we get! He’s an ex-police dog handler so he loves German Shepherds and I love Labradors!