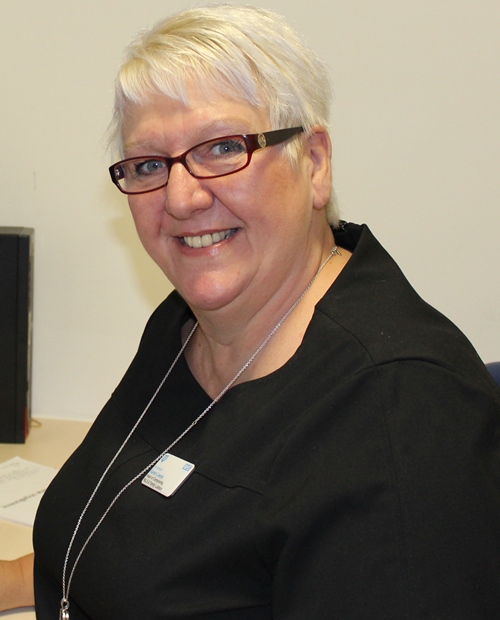 We know there are lots of very interesting people in our Trust, whether through your work, your interests or your hobbies outside work. We want to get to know you and share your story.

So here is the next instalment of our new series: In Conversation With… introducing Karen Leese, our Head of Complaints, Patient Advice and Liaison Service (PALS) and Family Liaison.

Personal life: Lives with her two daughters, Sarah, 31, and Ami, 28, who both work in the NHS, and their Staffordshire bull terrier, Lily-Tinkerbell.

And…Karen is a Lady, a real one! She bought a title for her 50th birthday as part of her bucket list – read more below!

I’m responsible for our complaints, PALS and family liaison services. This includes managing our complaints and PALS teams, coordinating feedback (good and bad), and ensuring we’re adhering to all relevant guidelines. I’ve been here for three years.

How did you end up here, was it always your dream to work in the NHS?

When I was little I have a vague memory of wanting to be a nurse, but when I was at school electronic typewriters were coming in so girls were being pushed into offices.

I left school at 15 and started off in office junior roles in the City – once I was sent to the American Embassy to pick up a visa and passport, I didn’t know who for but I had an armed escort out!  Apparently it was a high profile Iranian at the time.

I discovered the NHS in 1991, after I’d had my daughters, when a friend encouraged me to join a care agency. I became an auxiliary nurse at the Princess Alexandra Hospital in Harlow. I loved it and I’d still be there except I had a knee operation and couldn’t lift the patients anymore.

What got me into complaints was a poor experience we had in 2004 when my nan died, so I wanted to help other families not go through the same.

Before here I worked in a variety of roles in primary care, which I really enjoyed and made friends for life.

What about your career as a bouncer…?

I worked behind a bar in a nightclub and that’s where I met my (now ex-)husband, he worked on the door and I had a background in judo (I represented Great Britain as a teenager!), so I ended up being a bouncer. I did that for about 10 years while working full time too.

I absolutely love my job. What my teams do isn’t easy as you’re often surrounded by negativity all day, but if you manage to do something positive, it seems much bigger. They’re all so dedicated to making a difference to our patients and are superstars.

We’re currently in the NHS’ 70th year, can you tell us about your involvement in the 50th anniversary celebrations?

I attended a garden party to celebrate at Buckingham Palace. It was absolutely amazing. I got really close to the Queen, Queen Mother, Prince Charles and Princess Anne.

We had free run of the grounds which were beautiful, it was the chance of a lifetime and I was nominated to go by colleagues, which was really special.

I also sang on stage as part of an NHS choir at the Theatre Royal, Drury Lane with David Essex. I can’t sing but they asked for people to put themselves forward so I did – I was more excited about meeting David Essex!

Now come on Lady Karen Leese, don’t keep us in suspense any longer, tell us about your title, and your bucket list!

I bought my title in July 2012 to celebrate my 50th. I’ve got five square feet of dedicated land within the estate of Hogun Manor on the west shore of Coniston Water in the Lake District National Park. I got a crest too! It was on my bucket list. For my 30th friends sent me up in a glider as that was on the list, but I hated it and kept my eyes closed the whole time! The next thing on the list is a Mediterranean cruise. I’m going with my family next July.

And it’s fitting that a Lady was once named Miss Harlow Town….

I was 18 and was put forward for this competition. I took part in the carnival, riding in a gold Rolls Royce. I led the Harlow football team out in an FA Cup match against Leicester. I even appeared in the sports pages of the Sun.

Any other claims to fame?

I lived in Singapore and Malaysia with my family as a child. A film crew came to my school one day and I ended up appearing in the film The Virgin Soldiers. My grandad John Mackett was also given Freedom of the City of London. He’d been a prison officer before becoming a senior usher at the Old Bailey.

We’ve got Lily-Tinkerbell, we got her with her brother, Lewey-Bear as puppies. We lost Lewey-Bear last year.

Lily-Tinkerbell is 13 now and going a bit deaf (though I think selectively!) as she’s really naughty. She’s absolutely spoilt by me and the girls. We’ve even got Facebook pages for them both!