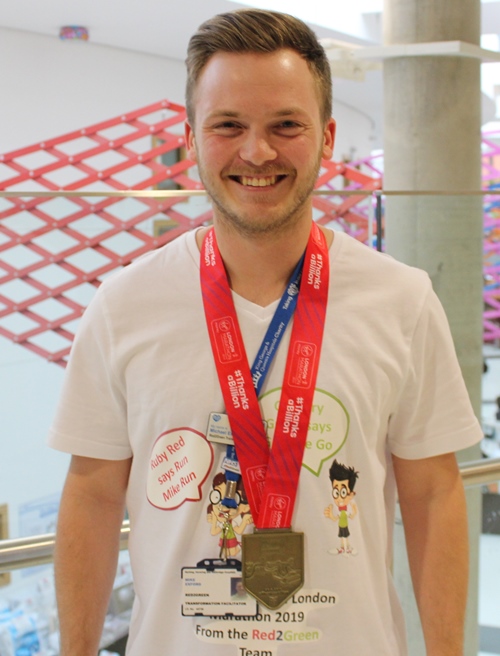 So here is the next instalment of our series: In Conversation With…Mike Exford, a transformation facilitator from our Red 2 Green team, who was also one of several colleagues who ran the London Marathon this year.

Family: Mike has a partner, James. He’s also very close to his family and spends a lot of time with his two nieces, aged 13 and six, and one-year-old nephew. His brother-in-law Craig Pewter works in the Cardiac Rehab team at our Trust.

And: One of the more interesting outfits in Mike’s wardrobe is a red Power Ranger morph suit!

It was my second time. I ran it in 2014 but got injured at mile 21 so it was agony finishing it and I didn’t really get to take it in.

I’ve been entering the ballot to do it again ever since and this was my sixth time applying. I did it in five hours and 16 minutes which I was really happy with, and I got the chance to enjoy the atmosphere.

I ran for the Riding for the Disabled Association. It’s a charity which has supported my niece, Ellamay, 13, and she now volunteers with them. I hoped to raise around £750 and it’s gone beyond my expectations; the total is now around £1,400 with people still making donations.

I also ran for a cause close to my heart in 2014, Myaware, which supports people with Myasthenia Gravis, a condition that causes muscle weakness. My mum was diagnosed with it shortly after I was born.

I’ve said I’d never do it again; however, I’m already starting to wonder. If I did do another, I think it’d have to be in another country, like New York.

I’m a Red 2 Green transformation facilitator. I joined the team at the end of last year but I’ve been at our Trust since 2013, as a physiotherapist.

Being in the Red 2 Green team is very different and I do miss being clinical. However, I love feeling like I’m making a difference to patient care, which was the whole reason I wanted to work in a hospital in the first place. I get to work with a range of staff, I’m learning loads, I love being on the wards and I really like the teaching aspect of it too.

We’ve recently been visiting our wards to take their pledges so we can continue to build on the success of the Perfect Week we held in March. There’s a lot of great work out there which is really helping our patients, making each day in hospital count, which is what Red 2 Green is all about.

I’m really proud that we recently agreed a supply of wheelchairs to our Trust with an external company. As the ones we have here can’t be taken home, amputee patients were often waiting up to eight weeks for their own wheelchair. Not only can that delay their rehab, it can mean they’re in hospital for weeks when they don’t need to be.

There are a couple of reasons I wanted to get in physiotherapy. My mum was in hospital for two years when I was young due to Myasthenia Gravis and physiotherapy played a big role in her treatment. Luckily she’s fine now.

I also injured my knee when I was 16, doing karate. Physiotherapy worked wonders and that was when I decided I wanted to do it. I’m quite physical and I wanted a hands-on job.

I went to the University of Hertfordshire to train, which included 1,000 clinical hours. I did placements at Princess Alexandra Hospital and Watford General. I really enjoyed it and soon discovered I preferred acute work in a hospital to the community.

I’m quite a chatterbox so couldn’t stand being in a room on my own all day – I need people around me.

My first job was at Watford General on rotation. It was really eye opening as students aren’t exposed to everything so it can be challenging when you’re left on a ward and the patients are your responsibility.

I learned a lot and moved here as I wanted to progress and do more acute care. It was very different and I found colleagues also at band 6 were very experienced so I had to up my game.

In 2016 I joined our surgical team to help patients with rehab following surgery and found I really enjoyed working with amputees. There’s a grieving process after losing a limb and the dynamics and learning processes for these patients was so different. It was challenging and I would get a real buzz when we had a breakthrough.

We hear your dream career before physiotherapy has something to do with a certain red Power Ranger….?

I was mad about the power rangers when I was a kid – that’s why I started karate. Originally was dream job was to be the red Power Ranger; then I got a bit more realistic and wanted to be a stunt man. A friend has even bought me a red Power ranger morph suit!

Besides dressing up as a Power Ranger, any other hobbies and interests outside work?

I gave up karate a couple of years ago to focus on work, but I took up gymnastics. I go a couple of times a week with one of my physiotherapist colleagues and it really helps keep up my fitness.

Other than that I often spend time at my parents’, where my nieces and nephew usually are - the girls keep me really busy!

And our favourite question of In Conversation With, do you have any pets?

I don’t as I live in a flat but my parents’ dog, a Golden Retriever called Chester, is like mine too. He’s nine and is great. I love taking him for walks with the kids.