In Conversation With...Amy Macatonia, core midwife on our Birth Centre 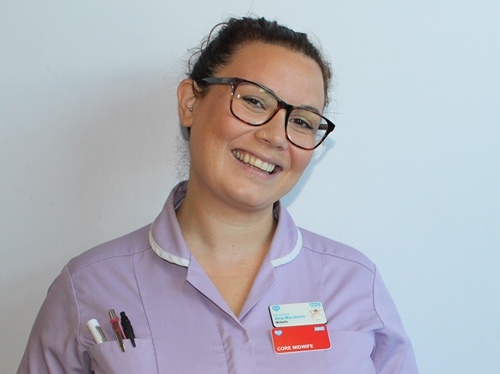 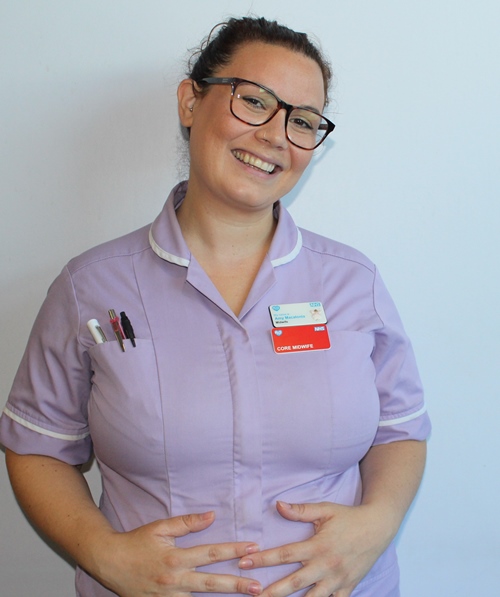 We know there are lots of very interesting people in our Trust, whether through their work, their interests or their hobbies outside work. We want to get to know them and share their stories.

As World Breastfeeding Week begins on Thursday 1 August, we spoke to Amy Macatonia, core midwife on our Birth Centre. Not only does she support our new mums with breastfeeding, Amy has also shared her own experiences – proving that being a midwife didn’t make it any easier.

Lives: In Epping with husband Ben, 36, and son Eran, two.

Did you always want to be a midwife?

I’ve always known it was what I wanted to do. I love babies and I really liked watching medical TV programmes growing up.

One of my mum’s friends was a neonatologist in the states. When I was 15 I got to go to North Carolina to shadow him. I saw c-sections and women giving birth vaginally. It was an amazing experience. I also spent time with an obstetric nurse. It’s different in the US; childbirth is obstetric led and they don’t have midwives in some states.

I also read Ina May Gaskin’s book as a teenager, she’s a midwifery guru in the US. I was fascinated.

Can you tell a bit about your career and how you came to our Trust?

I was advised to do nursing first so I went to Manchester University at 19. I wasn’t from there but wanted an authentic university experience living away from home, I didn’t realise that a nursing degree would be completely different.

It was near to the set of where the TV show Shameless was filmed and they gave students a bit of money for collecting rubbish for them to use on set, which I did once!

My training was hard work but amazing. When I qualified I started work at a community hospital in Epping.

I was young and thrown into it. It was a busy hospital and in my second week on the elderly care wards I was in charge. I loved it, despite it being quite stressful.

After a few years I wanted a break so went travelling with a friend who also wanted a break from the NHS. We went all over; Asia, Australia, New Zealand, India and Nepal.

I knew I needed to change my career path so applied for midwifery training when I got back.

I did a conversion degree at our Trust in 2012 with Southbank University. In some of my nurse training I’d scraped through but I did really well in midwifery. I was really proud I got a First.

I started in our triage at in 2014, then Labour ward, and then I was on the Birth Centre for two years before having my son.

Tell us more about your own experience of breastfeeding

I had my son on our Birth Centre and he had his first feed there, it was amazing. However, I had issues at home.

He was cluster feeding, at one point feeding constantly for 12 hours. People were telling me it wasn’t normal and to bottle feed so I could sleep, but that wasn’t what I wanted.

It also meant I had really sore, bleeding nipples and Mastitis, a common infection in breastfeeding mums.

It was a healthcare assistant at my local hospital who realised he had tongue tie and was cluster feeding because he was only getting tiny bits at a time.

In many cases, people think tongue tie is the issue and it isn’t, however, in my case it was. He had a snip to free his tongue and it was ten times better. I fed him for two years after that. It was just those first two weeks that were awful.

People assume because I’m a midwife who advises other women on breastfeeding I’d sail through it, but it didn’t mean I didn’t have my own issues!

How do you support our new mums with breastfeeding?

However, I like to find out more about the reasons as a lot of women want to bottle feed so they can get into a routine. I advise instead to try baby-led feeding, feeding your baby when they’re hungry.

There’s lots of conflicting advice and ultimately, everything a mother does is her decision. I share the latest research and facts with them, without being pushy, to help them make up their mind.

I find it frustrating when I hear a new mum say she’s going to ‘try’ breastfeeding, often because they’ve already got a negative impression in their head. I feel they’ve given up before starting and are just telling me what they think I want to hear. That’s not the case, I’m here to support them, especially with any issues they encounter.

Like giving birth, I think women should look really positively on breastfeeding. If they do have any difficulties, there’s lots of support which we direct them to. (See the end of our interview for support websites, numbers and Facebook groups.)

What’s it like supporting women to give birth when you’re pregnant with baby number two?

I love being pregnant on the ward and I find our patients are more open with me about their fears, and I can reassure them.

I feel blessed to give birth, it’s the most empowering thing a woman can do, and it’s important that they have the right support when giving birth.

I used to be all about going to festivals and gigs, however, now it’s all about family. I love being with my son; he’s very social and loves role playing and dancing. We go to Epping Forest a lot.

And I’m passionate about continually learning for my career, and helping pregnant women through education. As well as doing some bitesize training for colleagues, I also run evening antenatal classes on breathing and relaxation in childbirth.

Lastly, tell us more about your breastfeeding selfie campaign….

We want to change the perception of breastfeeding, normalising it as many women don’t feel comfortable to breastfeed in public. So I want to encourage mums to share their own selfies of them feeding their babies on social media, some of which we’ll also put up in the corridors of our hospital.

We’ve already had staff doing it and now I want to encourage mums in the community to join in. There’s a massive breastfeeding community in our area and it’s important to remember that other women have issues too, and we should all be supporting each other. No woman should feel isolated for their feeding choices.

So make sure you tag in @BHR_hospitals when tweeting your picture.