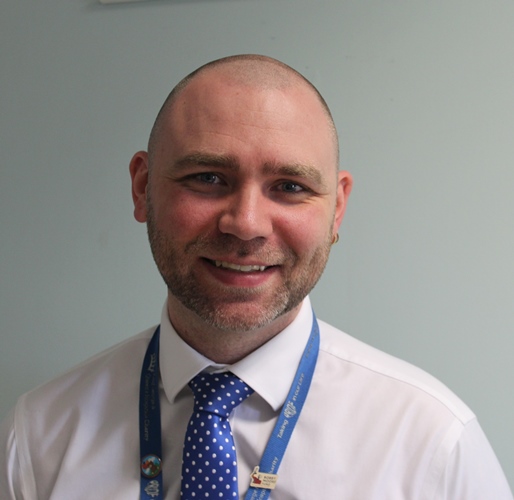 Here is the next instalment of our series: In Conversation With…Freddy Young, service manager for specialist medicine.

Lives: Collier Row with partner Kelly, 34, who also works for our Trust (as does most of his family – more on that later!), and their nine-month-old twins, Freddy and Emily.

And: Despite his demanding job at our Trust, and even more demanding role at home with twins, Freddy still finds time to run his own part-time business as a DJ!

I’m service manager for specialist medicine. I manage five wards, alongside colleagues, and am responsible for ensuring they (as well as our outpatient areas and diagnostic units) meet safe staffing levels and provide great care. I also oversee complaints, and redesigning services to make them better for our patients.

I’ve been in this role for around a year, but in the Trust for about eight years.

Tell us a bit more about your career, was the NHS your first choice?

No, I’d always wanted to be a mechanic and had started an apprenticeship with Ford straight from school. I planned to own my own business one day. I had to give it up after several operations on my knee which meant I couldn’t physically get under cars anymore. I’d fallen over and ripped my cartilage at 16.

After that I got a job in sales at the Halifax, selling mortgages, life insurance and bank accounts. I did enjoy that. I got out before the banking crisis; there was internal knowledge that it was coming and pressure to mis-sell, which I wasn’t comfortable with as I thought ‘what if that was someone in my family?’. I knew I had to get out.

I got a job here in our appointments call centre. I’d already done some work on our bank before my apprenticeship and I thought it would be a good stop-gap until I found something else.

Within a year I was the appointments supervisor and then I got more experience through a series of secondments, including in the project management office, medical records, and with the iFIT team. I was reception manager on our Emergency Department, a support service manager in Surgery, then patient pathway manager for specialist medicine.

What made the NHS your career rather than a ‘stop-gap’?

I really enjoy my job. I love that I’m always on the go and no two days are the same. I’ve done similar roles but never exactly the same. I love the variation and thrive off stress.

Although it was really upsetting at the time, I think it was a blessing in disguise that I had to give up mechanics. All my mates who are still doing it spend winters freezing in their garages and there’s a lot of competition. Here, the work is constant.

I also grew up on the NHS; my mum Ashley Young is our Bed and Site Manager, and my dad John Young is our Head of Transport. My brother Dan Young also worked here for a while, now he’s at the Homerton.

There are really good opportunities in the NHS, I’m eager to learn and happy to do more and I’ve been lucky to have really supportive managers who have helped me to progress. My partner Kelly has also played a huge role in encouraging me.

Tell us about how you and Kelly met…

She’s been at our Trust for 15 years in the Clinic Change team in Outpatients. When I was the appointments supervisor I used to go into her department to do our letters and we got chatting and that was it.

What’s it like now you’ve welcomed your twins in to the world…?

They’re a handful and they don’t sleep. But I wouldn’t change it (except for the sleep thing!) You can really see their characters coming out now; Emily is a chatterbox while Freddy is content to roll around the floor doing his thing, but he’s a proper boy and can be a brute. She puts him in his place though.

They keep us on our toes but I do think with twins they help to keep each other content – although if they both have a meltdown at the same time it’s like World War Three.

We found out we were having twins at a scan early on. The lady doing it looked shocked and got another doctor. We were getting worried and they told us we had two babies. I was grinning from ear to ear - there are twins in my family so it wasn’t a huge shock, but it was for Kelly! She had them at Queen’s and the care was absolutely fantastic.

Tell us about your other job

I’m a mobile DJ. I do parties, weddings and corporate events. I did 21 gigs in two weeks last December. I’m a bit like the energizer bunny, I don’t stop often.

I’ve always loved music, I learned from a mate who was a DJ and then did pirate radio for a bit. When I met Kelly she encouraged me to do it and I started the business. I don’t want to do it full-time as I don’t want to fall out of love with it. It’s a good way to take a break from here.

There can’t be many more hours in your day, however, is there anything else you like to get up to?

I go to a 24-hour gym and often go in the early hours – I do dinner with Kelly and help with the kids, then do a gig, then gym.

Other than that I like to watch the footy, see my mates down the pub and get away on holiday, either with the family or the boys.