In Conversation With...Pat Becker, champion of our pain management programme 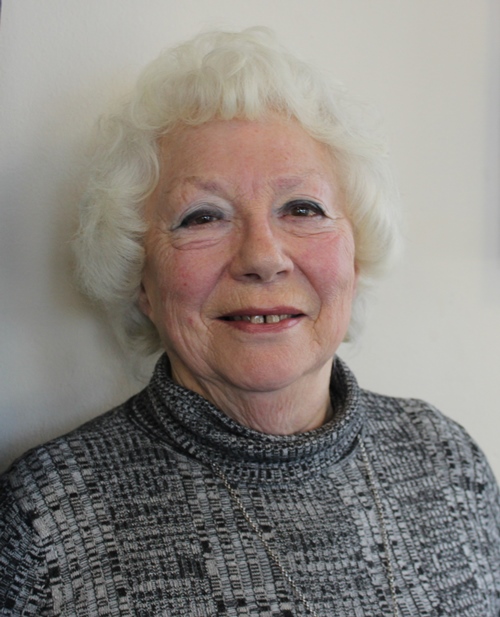 In a special edition of In Conversation With, we spoke to Pat Becker, who isn’t a member of staff at our Trust - she’s a champion of our pain management programme, run by our chronic pain service, after it transformed her life!

The 80-year-old grandmother of five and soon to be great-grandmother of six, first began to experience back pain when she was just 16 following a motorbike accident on her first date with her husband-to-be.

She hasn’t let her pain get in the way of holding down a job over the years, spending a few years working in a gun factory before taking on a more sedate role in a newsagent where she stayed for almost three decades!

Family: Pat has two daughters, Sally, 59, and Debbie, 56. She also has five grandchildren and five great-grandchildren, with the sixth on the way!

And: Pat was so delighted with how our pain management programme helped her that she now speaks to every new group of patients as they start the programme, to help reassure them and extoll its benefits.

What led to you being put on our pain management programme?

I’ve had back pain for years and it’s got worse as I’ve got older. I’ve got scoliosis, a curvature of the spine, and arthritis.

The pain first started after I was in a motorbike accident when I was 16 – it was my first date with Geoff, who went on to become my husband. We didn’t even go to the hospital at the time.

I’ve seen many doctors over the years and tried lots of different treatments - pain killers, injections, physiotherapy, acupuncture; stretching really helped for a while, until my ligaments became too stretched.

The pain management programme is an alternative way to help you manage the pain, such as when injections or medications are no longer helping. When I started it in 2017 I was bent over like Quasimodo; I couldn’t stand up straight or sit for long periods.

It really affected me as I couldn’t go out for meals with my family because I found it too uncomfortable sitting. I love music. Geoff bought me an organ to use at home and I love playing it, but the pain got so bad I couldn’t play more than a tune or two before giving up.

How did the programme help you?

I can’t believe the difference it’s made. I can stand up straight for the first time in years!

The amazing thing is I didn’t totally realise the difference it had made until I looked back at a pain diary I kept at the beginning. I used to get pain in my toes which would wake me up at night and it had stopped without me even noticing! I couldn’t believe that pain I’d had for years was completely forgotten.

The big things are lovely, like going out to eat with my family again. I see them a lot so it’s great to be able to enjoy a meal together and be comfortable. And I can play the organ again for up to half an hour at a time.

It’s also the small things that have made a big difference. As well as teaching us exercises and breathing techniques to deal with the pain, they also helped me understand it so I don’t worry so much.

When I used to get a painful spasm I would panic and knot up, worrying about what was going on inside. Now they’ve explained the pain is a normal part of my condition, I don’t worry as much or knot up, so it’s not as painful overall.

What made you keen to take time to speak to others who are just beginning the programme?

One thing that really sticks in my mind was my first day on the programme when they got out mats and told us to get on the floor. One lady was really worried and said she couldn’t as she wouldn’t be able to get back up again. The time they took to reassure her was lovely, they asked her to trust them as they would help her, and she did.

I love speaking to others about it. It was a bit daunting at first, but it made such a difference to me that I want to share that with others.

And I’ve found I’ve made lots of new friends too – we have several WhatsApp groups going!

It’s lovely to see the difference it makes to others. There was a young mum on it who wrote to me to tell me how it’s helped her to live her life again and feel she can go out rather than being stuck at home.

And for one couple, it even helped save their marriage. On the last day partners and family are invited along and it transpired that for one woman on the programme, her husband felt she was pushing him away when dealing with the pain. That helped them both realise what was going on and now they have date nights!

Aside from this new role you’ve taken on, what other jobs have you done over the years?

Before Tesco, Roneo Corner was a big factory and I started out working in the cashiers’ office there when I was 15.

After that I worked in a gun factory in Chadwell Heath, making machine guns. I was responsible inspecting them. They were very strict, if you made three mistakes you were out.

The factory also made vacuum cleaners and electric airing cupboards. My dad and sister worked there too, on the hoovers and cupboard assembly line.

I stayed at home for a while after I had my daughters, then I was cleaning a flat in Chadwell Heath, which was above a café, so I ended up becoming a waitress in the café for a bit. After that I got a job in a newsagent on the Drill roundabout in Gidea Park and stayed there for 27 years.

What do you get up too when you’re not giving up your time to speak to our chronic pain patients?

I love gardening, that’s something I’ve always enjoyed. And it’s very social in my neighbourhood, if ever I’m out tending to the front garden I’ll be out there for hours with neighbours stopping by to chat.

I’m a bit of a homebody too and find that people tend to come to me rather than me going to them.