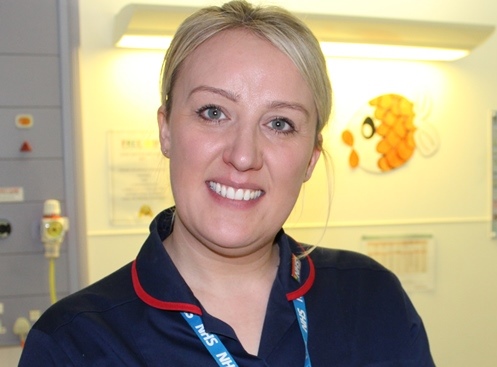 Laura May, children’s oncology clinical nurse specialist, was the most recent winner of our You Made a Difference Award. Laura was nominated by Daniel Devitt, the interim Children’s Commissioner for Redbridge CCG. While visiting the hospital, Daniel noticed that Laura was feverishly working on a string of beads. Laura explained that she was making ‘beads of courage’ for one of her patients who had sadly lost their original set.

Beads of courage mark a significant moment in a child’s cancer journey such as finishing a treatment, attending a hospital appointment, or having a blood transfusion. They are a symbol of hope and support and are a physical reminder of a child’s bravery.

Laura explained that one of her patients had lost their beads after they had left them in their parent’s car, which was then unfortunately stolen. The patient was distraught at the loss of their beads, so Laura decided to help. Using breaks and her own time, she used a photo of the beads to reconstruct them.

Laura said: “When my patient’s mum told me what had happened, she was more upset about losing the beads than the car being stolen. I asked her to send me a photo. She had one of the first 18 months of the beads, so I recreated them to this point and then worked out what would need to be added to make up the rest.”

In his nomination, Daniel said “I have served alongside some dedicated professionals in my time as Children’s Commissioner, but I have never come across someone so dedicated and seemingly unaware of how special their efforts were.”

Laura has worked at our Trust for two years, joining us after working at Great Ormond Street for nine years. Talking about what she loves most about her job, Laura said: “I just love the kids- I think they’re absolute heroes! In my 12 years of oncology, every single child I have cared for has made a difference to me; I’m just always in awe of their and their family’s strength.”

“When my patient’s mum told me what had happened, she was more upset about losing the beads than the car being stolen. I asked her to send me a photo. She had one of the first 18 months of the beads, so I recreated them to that point and then worked out what would need to be added to make up the rest.”

“The mother was overjoyed when they were completed- she had only told me because she was upset about it and never expected that I would remake them. You could see that the child was really happy they had been replaced too.”

Talking about the importance of the beads for our young patients, Laura said: “Not only are the beads important to the child at the time, they’re also a way in the future of the person looking back a remembering how strong and brave they were and of what they have been through.”

If you know someone who works at our hospitals and really makes a difference, then nominated them for our monthly You Made a Difference Award. More information and the nomination form can be found on our website.