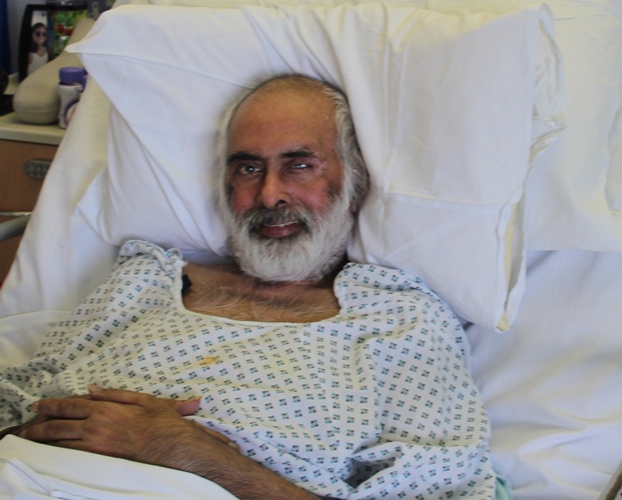 The 63-year-old was admitted to King George Hospital with Covid-19 earlier this year after collapsing at his home in West Road, Chadwell Heath. He then spent four months in intensive care, two of those under sedation.

He said: “I remember my daughter calling an ambulance and being taken to hospital, then I don’t remember anything for the next two months.

“My time in hospital has been very up and down – I found myself sometimes feeling quite angry at first and taking it out on the wrong people, but I always apologised. Now, it’s on the up all the time. I’ve got to give it to the staff, they saved my life and have really looked after me. They’ve become part of my family, everyone knows me, the doctors, nurses, and the cleaners. I cannot praise them enough.”

Anil, who is married to Darshee and has daughters Aneeka, 28, and Nikeeta, 27, left hospital to go to a residential rehab centre to continue his recovery. He’s keen to get back home and hopes he’ll make it in time to celebrate both his daughters’ birthdays in November.

He added: “I’ve got a lovely family and I just want to get home to them. We’ve been video calling but it’s not the same. I’ve seen them once in all this time, when I was taken outside to see them by the staff. It was very emotional.

“What’s kept me occupied throughout my time in hospital is contact with my family, I’ve also got three sisters, nieces and nephews, and lots of good friends. I spend 90 per cent of my time on the phone. I’ve also enjoyed lots of chats with the staff, and other patients.”

Anil, a building manager, even celebrated his 63rd birthday in hospital in August, and said it made his day when the staff made a fuss of him by singing to him and making him a huge card.

He also has a serious message for those not adhering to the rules which are there to keep us safe during the pandemic.

He added: “I wouldn’t want anybody else to go through what I have so everyone should wear a mask and take all the precautions they can. I get really annoyed when I hear people aren’t doing what they should; they would change their minds if they saw people like me suffering.”