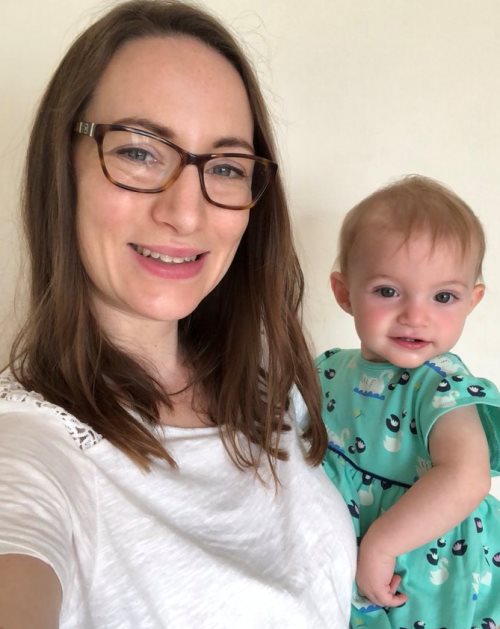 To help raise awareness of Sepsis, which can be very difficult to diagnose as it often hides behind common illnesses like flu or gastroenteritis, mum-of-three Laura Staples, 34, from Upminster, shared her own experience when her 15-month-old daughter Hayley had sepsis in July this year.

“After some to and fro, our GP sent us to the Emergency Department after finding that Hayley had a urine infection.

She’d not been right for a few days, she had a high temperature, over 40 degrees, wasn’t eating and was barely drinking apart from breastfeeding. She was then admitted to Tropical Lagoon ward at Queen’s Hospital.

As the staff were trying to do some tests on her, she nosedived. Her temperature rocketed, her skin was mottled and her fingers and toes were blue and she was sick all over herself then went limp and floppy. It was really traumatic. I knew it was serious when we were bombarded with medical staff.

I’d never seen her so ill and it was really upsetting as usually she doesn’t keep still.

They tried different antibiotics and she had various scans and a lumber puncture to check for meningitis.

Then they told me she’d had a blood infection. E.coli had got into her bloodstream.

I read the word sepsis on her discharge notes. You hear about sepsis on the news and how serious it is and I was worried if it could come back.

The staff were really lovely and told me to bring her back if she had a temperature again (and she has been back since, with another urine infection!), and to keep her hydrated.

I stayed the whole time and I found the team were really great, not only with looking after Hayley, but making sure I was okay too. I got through it on adrenaline but I cried all afternoon when she got home!

It was really difficult as my husband, Dave, stayed home to look after our other two girls, Charlotte, six, and Emily, three. Charlotte even asked if Hayley was going to die, so we had to reassure her that she was in hospital to get better.

I know that sepsis can be really hard to diagnose, as it was in this case. I think it was my gut instinct that I knew something was wrong, and I found the staff to be really reassuring and didn’t make me feel stupid.

My advice to anyone else is if you’re not sure, get it checked.”

Sepsis, also known as blood poisoning, is when our immune system attacks our body’s own organs and tissues following an infection or injury. If not treated immediately, it can result in organ failure and death. If diagnosed early, it can be treated with antibiotics.

Our Trust has its own sepsis protocol, an electronic algorithm, for identifying sepsis in children.

The first of its kind in the UK, the system prompts nurses to ask extra questions when a child is first brought in. It generates a score and creates priority alerts for cases where it’s more likely to be sepsis. This ensures doctors see that child as a priority and can start treatment immediately if they do have sepsis.

Sylvester Gomes, Paediatric Emergency Consultant and our paediatric sepsis lead, said: “Sepsis can be hard to diagnose from other fevers, many of which are caused by coughs and colds. Finding sepsis in a child can be like finding a needle in a haystack.

“We started using the algorithm in June this year and so far it’s been very accurate. My ultimate goal is to develop a standardised system for use in all hospitals in the country.”

You can read more about Sylvester’s work to improve diagnosis and treatment of sepsis in his In Conversation With interview.

Find out more about the symptoms of sepsis on the UK Sepsis Trust’s website.