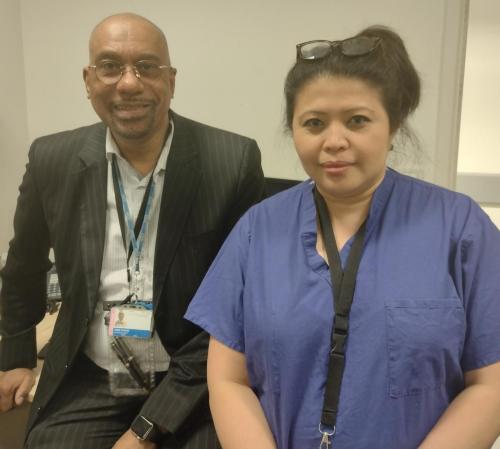 Our team held an Endometriosis Awareness Week (18 to 24 July) to help tackle the backlog of patients waiting for treatment, as well as raise the profile of our Endometriosis Centre.

There is currently no cure for endometriosis, a long-term condition where tissue similar to the lining of the womb starts to grow in other places, such as the ovaries or fallopian tubes. Surgery to cut away patches of this tissue is one of the treatments which can ease symptoms.

In a usual week, we carry out between one and two of these operations. During this targeted week 24 were completed, with our team using our Da Vinci Xi system to carry out robotic assisted surgery.

This is when a surgeon sits at a computer console to control the robot, which uses small incisions, surgical instruments, and a camera, much like laparoscopic surgery. Robotic surgery gives more precision and a greater range of movement, it also means the surgeon does not tire as easily.

Yemi Coker, lead consultant of the Endometriosis Centre who completed several of the operations, said it would have been impossible to achieve 24 operations in one week without the assistance of robotic surgery.

He explained: “The robot helps hold everything perfectly still and with the airseal technology you can operate at much lower pressures. You’re also not straining yourself by repeating the same action over and over again, you can really feel the difference.

“Complex endometriosis cases take a long time, usually about three hours. Using robotic assisted surgery, we have reduced this to around 80 minutes. When robots were first introduced, I was much younger and questioned whether they had a role to play in surgery, now I know they do.”

We’d hoped to reduce the number of patients awaiting surgery by half, however, we managed to exceed that, reducing our waiting list from 34 to around 10 patients, who will be targeted next.

As for what our patients made of having a robot assist with their surgery, Yemi added: “They thought it was fantastic. As the surgery is minimally-invasive they were up and about the next morning and ready to go home. It really made a difference to them and we got great feedback.”

Some operations were even live streamed with patient consent so local GPs could watch, and an open day was held on Saturday 23 July inviting the public to meet the team.

Maureen Rey, clinical nurse specialist for endometriosis, added: “It took a lot of time to put together as these surgeries are complicated and we need other specialities involved too, we got a lot of support.

“We wanted to do this to help clear our backlog and patients who had been waiting were really pleased to be having their surgery. I speak to women every day who are affected by this condition, so it was really rewarding to be able to help them.”

Our team also got a boost during the week when the first women’s health strategy was launched (on Wednesday 20 July), which aims to tackle the gender gap in healthcare.

The strategy specifically mentions endometriosis, ensuring specialist services like ours have the most up-to-date evidence and advice and more clearly defined standards of care patients can expect.

Pictured top are Yemi and Maureen.