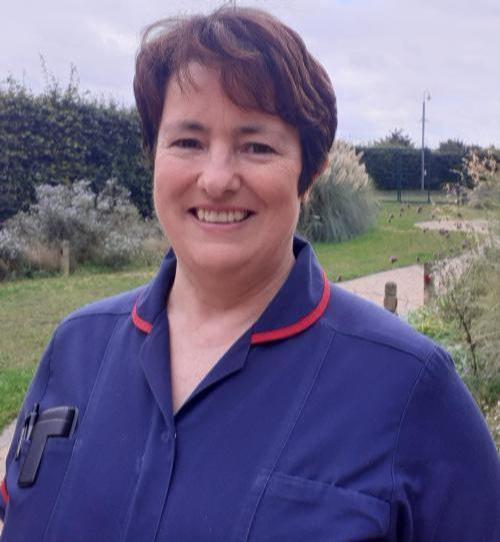 Heart failure nurse Mags Chineah (pictured) rushed to the aid of a driver following a crash on her way to work – pulling a man in his 50s from his car as his bonnet went up in flames.

Mags, who has worked at our Trust for almost 30 years, said: “I saw a car crash into a sign on a mini-roundabout and could see flames under the bonnet straight away. I was worried it would explode so I jumped out of the car and sprinted over.

“He was in shock so wasn’t moving very fast so I helped pull him out and got him away from the car as quickly as I could. I was completely acting on instinct.”

Luckily, the fire brigade were quickly on the scene of the crash, in Dagenham Road, Rush Green, and put out the flames to prevent an explosion.

It was by chance Mags was even there, she was being driven to work by her daughter and was running late.

Her daughter Nicole called 999 and once Mags had checked both drivers were okay, she headed into work as the emergency services had arrived.

It’s not the first time mum-of-three Mags has helped in an emergency, she’s often gone to the aid of people who have collapsed in public, including once on a plane. She added: “It was in ‘99 and I was on a flight with two of my children when they were little.

“A call went out for a nurse or doctor as someone had collapsed so I went to help, in that case it was a simple faint. I never panic in an emergency and it doesn’t bother me to run towards a situation. In this case it was the first time I’d sprinted in years – and I think I pulled something!”

Our Chief Nurse, Kathryn Halford, said: “Mags displayed incredible selflessness and compassion when she ran towards danger to help the driver and we are very proud of her.”