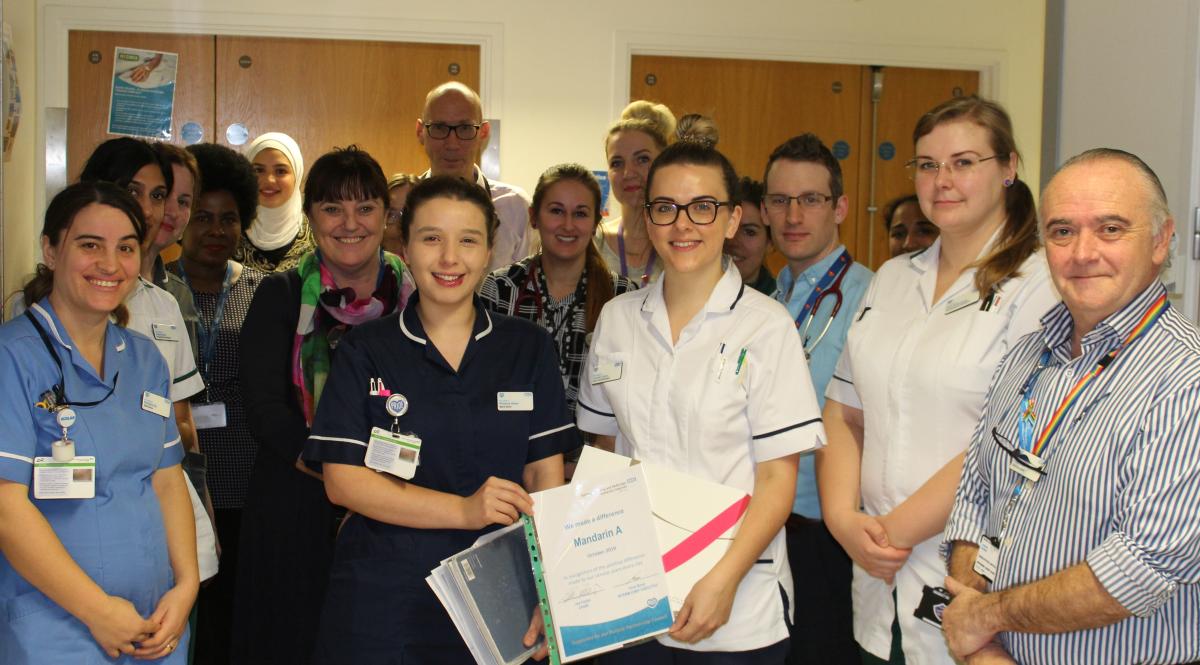 Mandarin A ward at Queen’s Hospital are the latest winners of our You Made a Difference Award, a monthly prize that celebrates those who go above and beyond to give outstanding patient care.

The team was nominated by a patient’s relatives on behalf of their father for the care he received. They wrote that their father had been diagnosed with Parkinson’s dementia, which had made caring for him challenging, but staff still treated him like an individual: “Dad had always been very sociable and had an outgoing personality which was not very evident when he was first admitted. However, over time, staff brought out this side of him again.”

In their nomination, the daughters praised a number of in particular the care given by Marjana, a health care assistant on the ward. They said that her “caring nature made him feel involved and worthwhile. She took the time to engage him with books and magazines, helped him with his crosswords and found out about his interests. Our dad would always look forward to seeing her.”

Other healthcare assistants commended by the family were Adebayo, Canice, Basiratu, Oladele, Eva, Noel and Victoria. They explained about how much their father trusted them and how they were able to calm him if he became agitated. They also helped him with his mobile phone, which he found difficult to use due to symptoms of Parkinson’s disease, so that he could keep in contact with him family while in hospital. They also praised how staff made sure their father maintained his dignity, was clean shaven, and spoke to him in the same way his family would.

The daughters also thanked the role of Sodexo colleagues, in particular Ingrid who made sure that their father’s meal preferences were followed. They also wrote that Bella, the cleaner on the ward, always spoke to their father with kindness.

The daughters praised the teamwork of Mandarin A; “whilst the direction comes from the senior managers, the staff on the floor including the nursing team, physiotherapists, doctors and occupational therapists made this a reality.”

If you know someone who deserves recognition for giving outstanding patient care, why not nominate them for a You Made A Difference Award? More information and the nomination form can be found here.