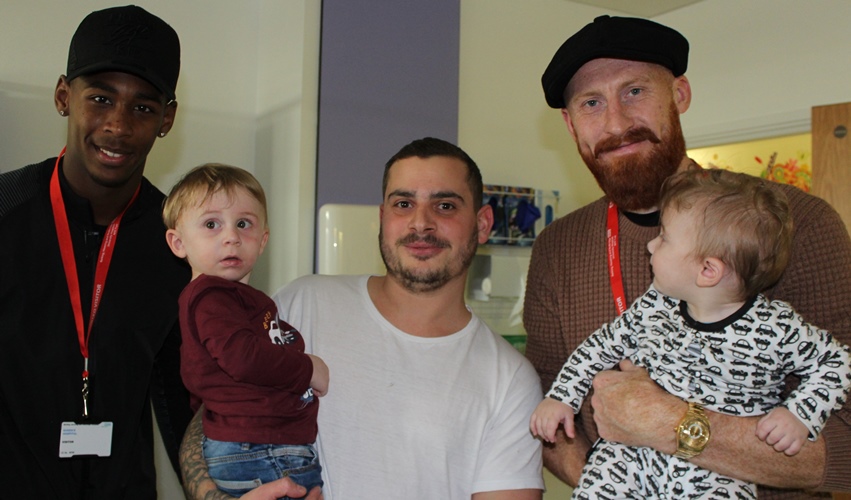 Poorly children at Queen’s and King George hospitals have had their day brightened by visits from football stars.

West Ham players James Collins and Reece Oxford paid a visit to Queen’s Hospital on Friday 9 December and made the day of some young patients – and their parents!

Dad George Arundell, 31, was in our hospital with his family after son Ernie, 18 months, had a seizure. He’s a huge fan and took the chance to get a picture and autograph for Ernie and his six-month-old brother Lennie.

George, of Verney Road, Dagenham, said: “It did brighten our day and helped to take our mind off worrying about him for a short while. It created a nice atmosphere too.”

The players also handed out presents including teddy bears, footballs and signed programmes.

James said: “It’s a lovely thing we get to do. I’ve done it for the last couple of years.

“It can be a tough time for the young fans so this is our way of showing our support and that we are thinking of them.”

Young patients at both our hospitals were then treated to a visit from the entire team of Dagenham and Redbridge Football Club on Monday 12 December.

Half the players visited children at Queen’s Hospital, while the other half went to King George Hospital, handing out chocolate treats and match tickets to youngsters.

Player Scott Doe said: “It’s my seventh season with the club and I’ve done this every year. It’s a great chance for us to give something back and it’s really nice to be able to put smiles on kids’ faces. And we really think the staff deserve some chocolates at this time of year too.”

Among the children they spoke to was seven-year-old Roman Stringer, who was in following an operation after he broke his wrist playing with his brother on their bunk beds. The Richard Alibon Primary School pupil said meeting the players was a good surprise.

Pictured are players Reece and James with George Arundell and sons Ernie and Lennie.