On this day last year (15 December), our first Vaccination Hub opened at Queen’s Hospital, offering the jab to care home workers, alongside our own vulnerable frontline staff.

The King George Hospital Vaccination Hub quickly followed in January when we also reached the milestone of vaccinating 12,000 people. Since then, we’ve continued doing our bit in the vaccine effort, offering the jab to all our staff, local healthcare partners and branching out to offer the public theirs at the King George Hospital hub when it became a certified centre and joined the national booking system in March.

As we reached our milestone anniversary this week, the number of jabs we have given hit 136,500.

Alan Daly was the first person to receive his jab, from nurse Sharon Wright (pictured below), as we marked our anniversary. He said: “At the King George Hub the staff were friendly and Sharon was particularly warm and positive in her approach to deliver an impeccable service.” 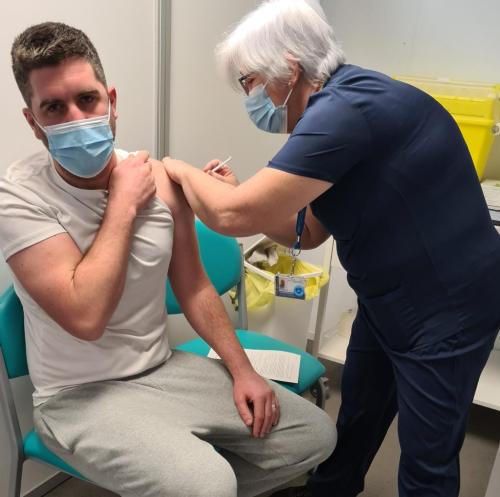 We’ve been quick to play our part in the booster programme too – offering it to all our staff in pop up sessions at Queen’s Hospital, and to the public at our King George Hospital Hub.

Increased demand for boosters saw our hub double the number of vaccinations in an average day on Monday this week (13 December), giving 720 people their jab.

Getting your booster vaccination is easy, you can book online.

Our hubs have been quick to find ways to adapt to meet the needs of our community including, flexible hours, supporting jabs for the housebound and decorating a designated booth (pictured below) to help make children feel more at home as 12-15-year-olds became eligible for the jab. 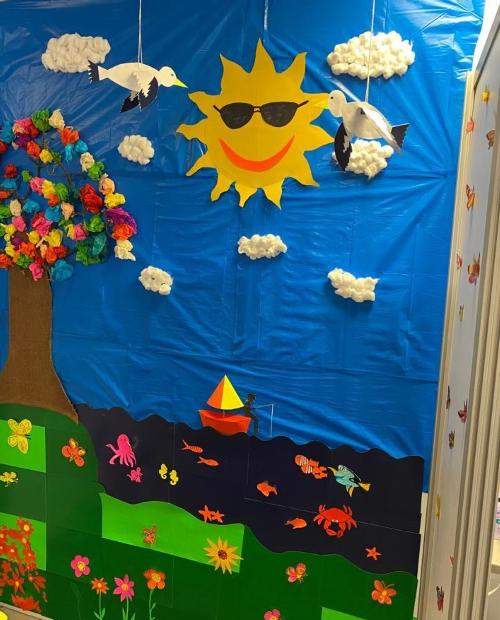 ‘We’ve got a responsibility to keep our patients safe’

One of the first people to be vaccinated at our Queen’s Hospital Hub on opening day was care home worker Julie-Ann Hull who was relieved to have the vaccine to help protect her patients. She said: “We look after a lot of elderly and vulnerable people, going patient to patient and if we’re not protected, we could be putting people at risk. We’ve got a responsibility to our patients to keep them safe.”

While Lourdes Da Cunha, one of our anaesthetists was hoping the vaccine would make his life a bit easier and allow him to get back to some of his normal activities, when his underlying condition meant he had to shield.

Nurse Eileen Gook was another member of our team hoping the vaccine would allow her to get back to doing the job she loved, as her autoimmune disease meant she‘d also been shielding.

No hesitation in coming out of retirement

Our vaccination hubs have only been a success thanks to the countless staff behind them – not only those giving the jabs, also those who made them possible.

Steve Last, our Director of Estates and Facilities, shared the collaborative efforts of all involved (and the precedents set!), while Sarla Drayan, our Chief Pharmacist and Associate Director of Medicines Optimisation, gave her take on the interesting challenges she faced while playing a role in making history (including early starts to make sure the vaccine was defrosted in time!)

And Margo MacFarlane was one of several nurses who didn’t hesitate to return from retirement (after a 50-year nursing career!) to support our vaccine effort.

The grandmother-of-four, said: “As soon as I heard about the vaccine, I knew I wanted to be part of it.”

We reached our milestone 100,000th vaccination in August when Naomi Nwabueze received her vaccination at King George Hospital Hub, and was given a complimentary box of chocolates to celebrate.