We are trialing an app which allows our post-stroke patients to test themselves at home for atrial fibrillation (AF), a heart condition that causes an irregular and abnormally fast heart rate.

The app, called FibriCheck, allows users to measure their heart rate by placing their finger over the camera lens of their phone for 60 seconds. Results are immediately sent to our Stroke team.

Currently, stroke patients use Holter monitors after being discharged to test for AF. However, wait times for the monitors has increased during the pandemic. 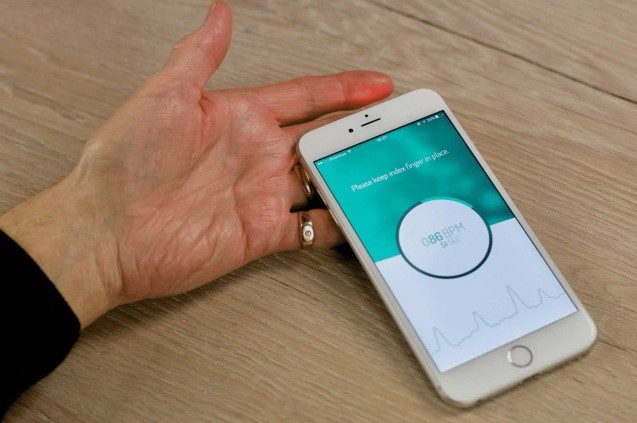 The trial of FibriCheck, which is being led by Jiji Philip, an advanced nurse practitioner, will see some of our patients use the app alongside standard monitors. The results of the app and monitors will be compared to see if the app is accurate enough to be used as an alternative to the monitors.

Ashok Mathew, a stroke consultant at our Trust, said: “We have been using FibriCheck for our acute stroke admissions for just over a month, and it has already identified one patient with AF.

Atrial fibrillation is responsible for a quarter of all strokes, and the vast majority of these are preventable if it is caught in time.

“In this instance, the patient began anti-coagulation treatment within a week – far sooner than previously.

“FibriCheck is very appropriate during the Covid times as patients are able to be monitored without coming into hospital.”

The trial has been influenced by the use of FibriCheck in our Cardiology department. As part of a project called TeleCheck-AF, patients in our heart rhythm clinic have been assessed remotely without the need to come into our hospitals.

Afzal Sohaib, a cardiology consultant, said: “The feedback we’ve received from patients and their carers is that FibriCheck is easy to use. I’m confident the measurements are reliable, and they provide a wealth of information.”