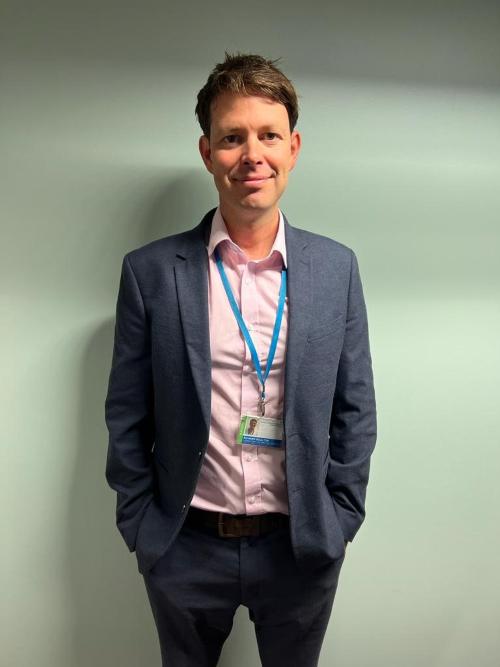 Our Surgery team has joined the Orion trial, offering a new surgical treatment for haemorrhoid patients who require surgery, where high oscillating frequency energy is used to heat up and destroy the tissue, shrinking the haemorrhoids.

The trial is being led by Sheffield Clinical Trials Research Unit. We’re one of 16 hospitals to sign up and only the second, after Sheffield, to offer the procedure to the first patients, carrying out two procedures in August.

The new procedure, radiofrequency ablation known as the Rafaelo procedure after the company which manufactures the machine to carry it out, takes around a third of the time as the standard procedure, and recovery time is also much less.

Consultant colorectal surgeon Richard Boulton (pictured) is the principal investigator for the trial at our Trust. He said: “Current standard treatment is where we use stitches to tie the blood vessel and shrink the haemorrhoid, it’s fiddly but effective. However, this new procedure takes just 15 minutes, is less painful and allows patients to return to their normal activities much quicker.

“For the standard procedure, patients are out of action for a week, whereas this allows them to go back to work the next day. It’s very successful and being able to treat more patients due to the reduced time it takes will also help with our drive to reduce our waiting lists.”

The trial, which runs for 15 months before a further year of review and follow up on the findings, aims to prove the new procedure is as effective, if not more so, as the standard one.

Patients are anonymised when they sign up so won’t know which treatment they are getting, allowing our surgeons to review unbiased feedback for each procedure.

Following the first operations we already have further patients signed up, who will have their procedures at the end of this month. Around 376 or more people will be operated on across the country as part of the trial and Richard hopes we can treat as many as possible, as he passionately believes in the new treatment.

He added: “I feel strongly it’s in the patients’ best interests. There have been a number of smaller studies, I was the author of one, which show how good it is for reduced post-operative pain. It’s proven to be safe and effective and it’s a procedure I really believe in.

“We want to keep pushing the envelope, striving to look at new, superior, techniques to offer our patients. It was also really nice to be asked to take part in the trial as we perform lots of these surgeries. This is the start of a journey of collaboration and building on doing more research and innovation in our Trust, the start of the future.”

Alongside Richard, fellow colorectal surgeon Veeru Shatkar is operating on patients as part of the trial. They are also being supported by our Research and Development team.

The trial has been funded by the National Institute for Health and Care Research.