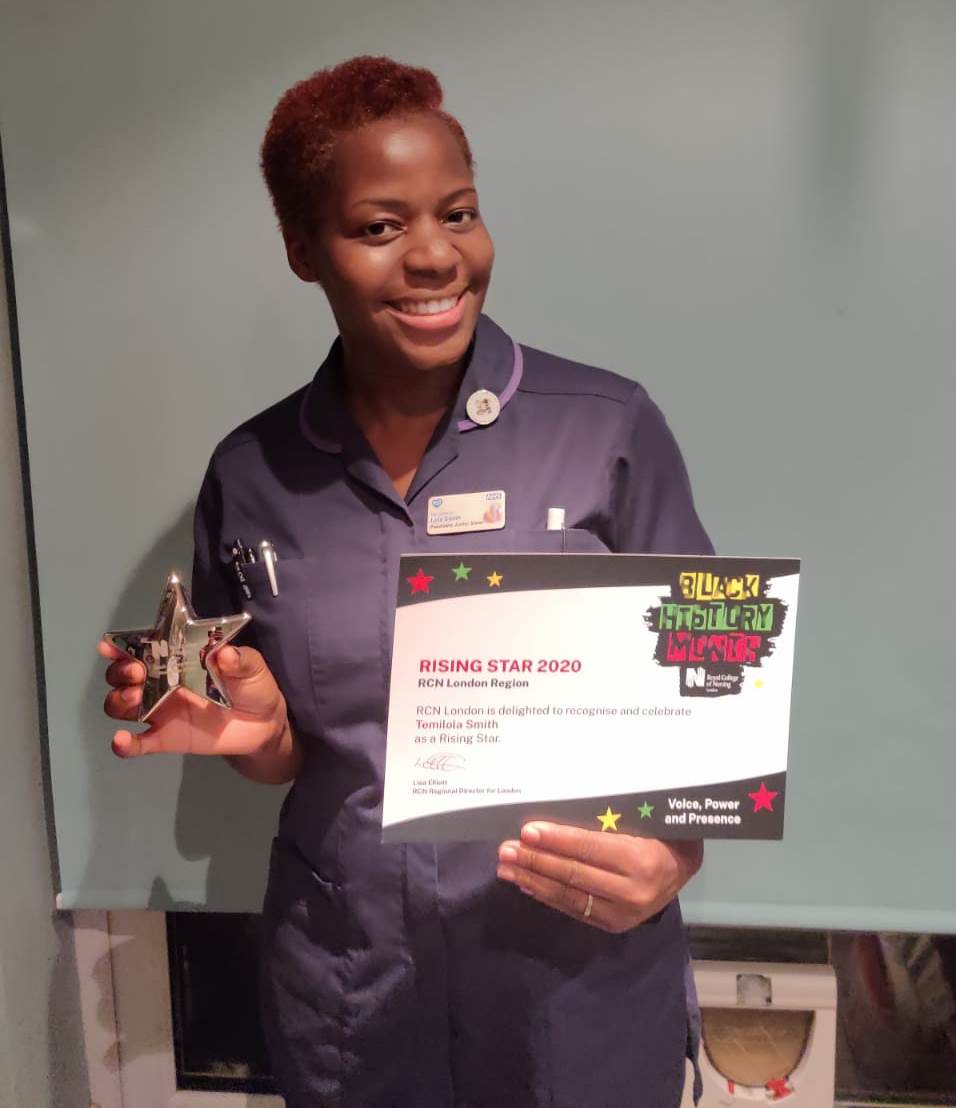 Lola Smith, a practice development nurse in our Children’s Emergency Department, has been honoured with a Rising Star Award by the Royal College of Nursing, as part of their celebrations to mark Black History Month.

Lola, who has worked at our Trust for five years, said: “Getting recognition so publicly for a job that I love and would do regardless has really blessed me. I was genuinely shocked when I found out and the outpouring of love from my team and the Trust has been phenomenal.” She is pictured at home with her award.

Having joined us as a paediatric staff nurse, Lola started her new role as a practice development nurse just as the Covid-19 pandemic hit, which was a challenge, even with her positive outlook.

She added: “I remained in our Emergency Department during the pandemic, working on the adults’ and children’s units. I’m a naturally joyful person, but it was tough. I’m a Christian so I prayed lots and had a song which I would always sing on my way to work which declares joy – that’s how I got through it.

“It was a privilege to work at such a time; it’s amazing what a team can do when faced with so much. Our team worked fantastically well together. We adapted quickly to change and just got on with in. We have an amazing matron and clinical lead who ensured we were always supported and looked after.”

It was Lola’s matron, Melissa Townson, who nominated her for the award.

Our Trust is lucky to have Lola on board, as she’s had a varied career up until now with one constant, working with children. She’s been a children’s minister at church and a primary school teacher. It was her mum, also a nurse, who suggested she try nursing when she was looking for a new challenge.

Lola found she loves the diversity and variety of working in an Emergency Department: “No one day isn’t the same. The challenge is awesome and the learning is second to none.”

Lola also hopes that in the future separate schemes to reward BAME colleagues for their work will not be necessary: “In the present climate, the reality is that BAME colleagues in the NHS tend to be underrepresented. I think it’s wonderful that such a scheme exists to recognise the work of BAME staff. However, I do hope and believe that one day we will have an NHS that doesn’t require BAME staff to have a separate scheme in order to get recognition for the work they do.

“That will take a real shift in culture, but with all the work being done, especially now, I do genuinely believe this can and will happen one day.”

Our other nurse to be recognised as a Rising Star was Angela Simiyu.