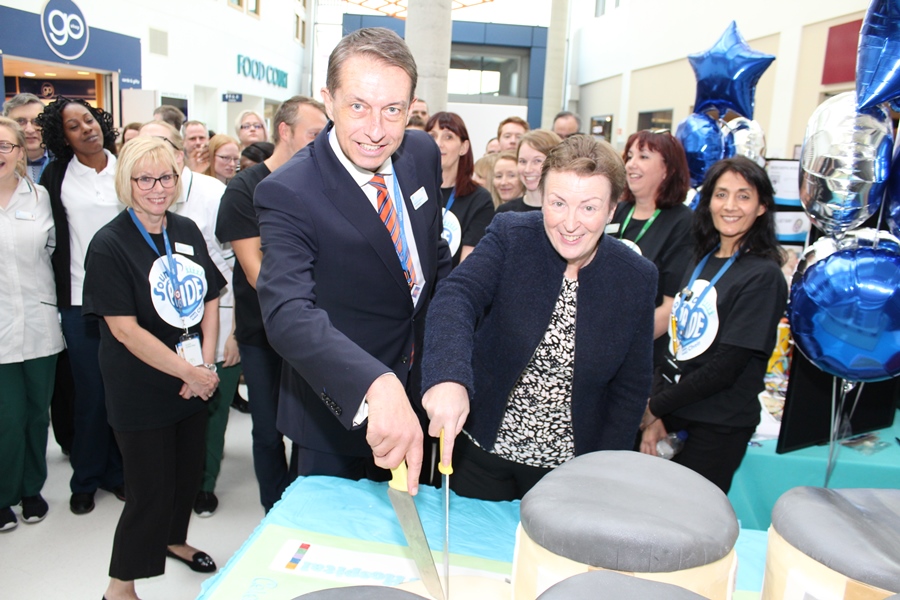 It was in December 2006 that Queen’s Hospital first opened its doors to our patients, replacing the former Oldchurch and Harold Wood hospitals.

So we held a celebration event on Thursday 15 December to mark the occasion, including a huge replica cake of the hospital.

Slices were then sold to raise money for our charity, which will help fund improvements to our hospitals.

Our staff, patients and visitors could find out more about our history on a special stall with memorabilia such as newsletters and press articles from over the years. Our young patients also got involved in the celebrations by making their own birthday cards.

Associate Medical Director Magda Smith, who has been at our Trust for 20 years, was among the executive team overseeing the move.

She said: “The staff were brilliant and pulled together to get the job done, particularly when it came to moving the Emergency Department (ED).

“It feels like it was only yesterday but so much has happened since then. It was a big change going into a brand new hospital and it took a while to get used to the much bigger building. It’s made things much better for our patients as it was designed with them in mind. It brought departments such as the ED and intensive care together so it’s closer for patients who need it. It also reduced the number of places where patients being moved between departments would come into contact with the public, which is better for their dignity and privacy.

“Hospitals don’t stand still, they continually change and develop and it’s not exactly the same today as when it opened.”

Other improvements include a dedicated car park and entrance for cancer patients, making it possible for more patients to be treated as a day case without the need to stay overnight, more privacy on the wards with smaller bays and more side rooms and a bigger education centre for staff, to encourage joined up working.

Sodexo, which provides services including hospitality to our Trust, also treated patients on our wards to cakes to mark the anniversary, and decked out the hospital's restaurant to celebrate the occasion.

Our next big birthday will be King George Hospital’s 25th anniversary in 2018.