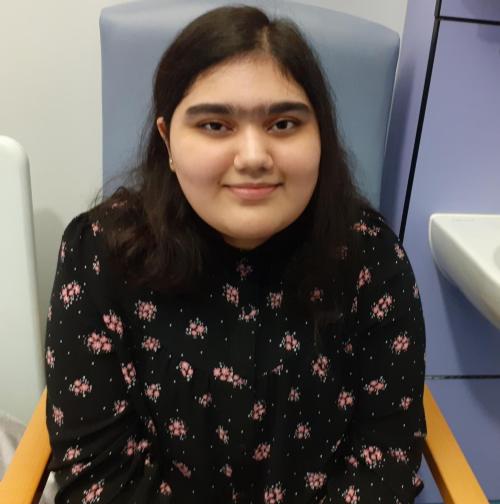 Areeb Khan (above), who has been in hospital since 10 August when her Covid-19 symptoms led her to collapse at home, has encouraged others to have the vaccine which could have prevented her almost dying from the virus.

For Areeb, the opportunity to have the vaccine came just days too late, with 16 and 17-year-olds invited to have the jab from 4 August 2021. Areeb, 16, began having symptoms on Thursday 29 July.

She said: “I wish I could have had the vaccine. I think my story should absolutely encourage others to have it.

“I was given a 50/50 chance of survival, which was very hard for my family, I had ECMO (Extracorporeal Membrane Oxygenation) which was a last resort. I’ve been in hospital so long, I just want to do normal things. I didn’t take it seriously enough before – I had no underlying conditions and even the doctors were shocked that I was so poorly.”

Areeb on a ventilator (below). 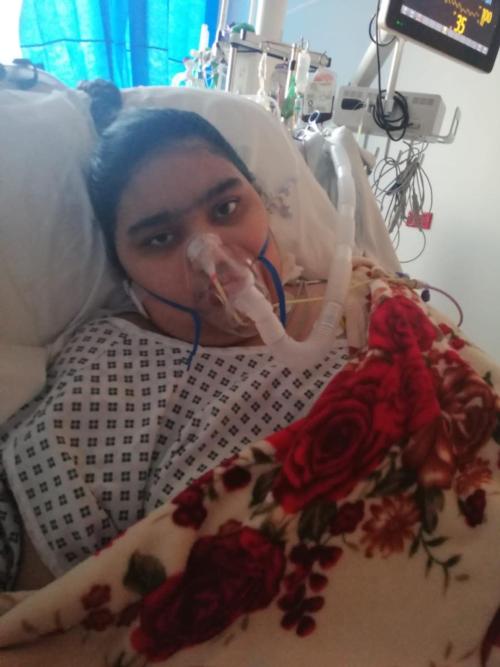 Areeb, of Chadwell Heath, was rushed to King George Hospital when her oxygen levels were below 50 per cent following her collapse. Just two days later, her distraught parents were called to say she was critically ill and needed to be transferred to the Royal Papworth Hospital in Cambridge for ECMO, as they went to collect her GCSE results without her.

ECMO is a form of life support which takes blood through plastic tubes placed in large veins and arteries, adding oxygen and removing cardon dioxide before returning it to the patient. During the pandemic, this was used after all other options had failed, as a patient’s last hope for recovery.

Areeb added: “I was one of the youngest patients to have ECMO at the Royal Papworth. Hope was very low. I started responding and was taken off the machine, but then I became very poorly and had to go back on it.

“I seemed to take a few steps forward, and then a few more back again; it was a very slow improvement.”

Areeb came to Queen’s Hospital in October to continue her rehab and is having to re-learn many skills, including walking. Nerve damage has caused foot pain and she can’t walk without support. She also suffered hair loss.

However, she is full of praise for all the hospital staff who helped care for her: “So many people spent time keeping me alive and I feel very lucky that I am. Nurses spent hours holding my hand and when my long hair become tangled after so long in bed, they cut it for me. They also played me music and verses from the Quran.

“I feel my life belongs to the doctors and nurses, everyone, who looked after me. I want to thank them for everything and it’s motivated me in my dream to become a doctor – I want to be a brain surgeon.”

While it hasn’t dampened her ambition, her long recovery has delayed Areeb from starting her A-levels, so she is planning to take a gap year before continuing her studies.

She added: “I want people to hear my story as it shows you can come back. I lost hope at times but I had a good outcome from ECMO.

“I never would have thought I could get through such an experience, but I feel mentally and physically stronger now and I’m excited to go home.”