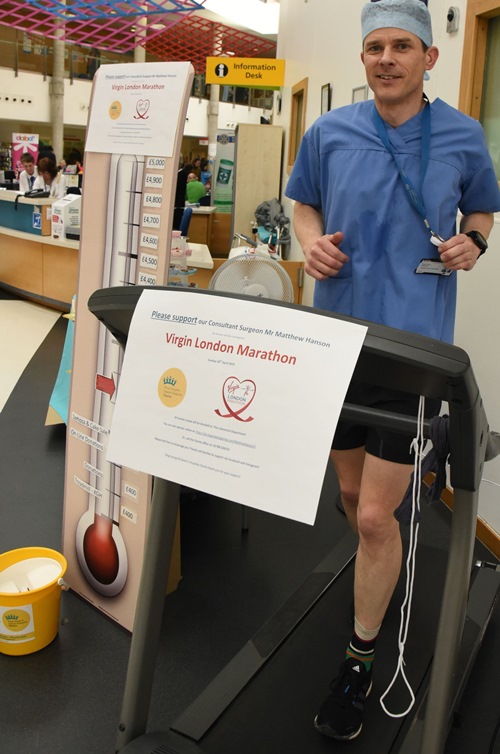 Not only is he doing the London Marathon in just a few weeks to raise money for the King George and Queen’s Hospitals charity, our colorectal consultant Matt Hanson also spent six hours straight running on a treadmill at Queen’s Hospital to boost his fundraising total.

He raised an impressive £1,500, boosting his overall total to over £5,000, over and above his original target.

Colleagues, patients and visitors all dug deep to reward his efforts as he ran well over the equivalent distance of a marathon in the atrium at Queen’s Hospital on Wednesday 27 March.

Everything the father-of-two raises will go towards improving the bowel cancer service at the Trust. 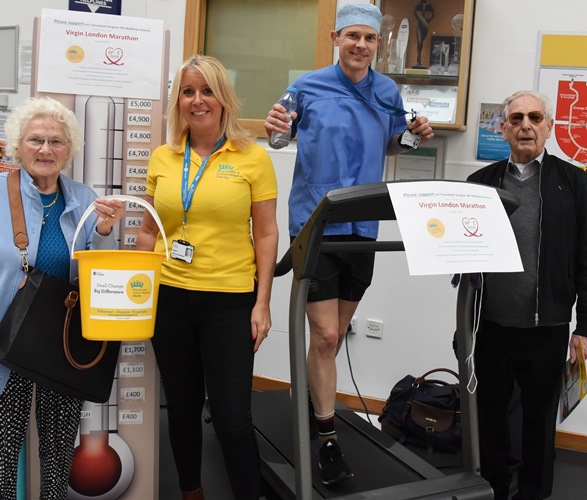 He also got an unexpected boost during his run when former paramedic Ron and his wife Pauline (pictured above with Matt and Stacey English from our charity) spotted him on the treadmill when coming in for an appointment. They were so impressed that the couple spent the next two hours rattling collection buckets for him!

Matt, 45, said: “A huge thank you to everyone who supported me on the day, as well as those who have supported my other efforts and sponsored me online.

“This allows me to bring together my two passions, my love of running and passion for my role, therefore I’m really excited to be taking part in such an iconic event.”

To sponsor Matt and help him raise even more, visit his Virgin Money Giving page.