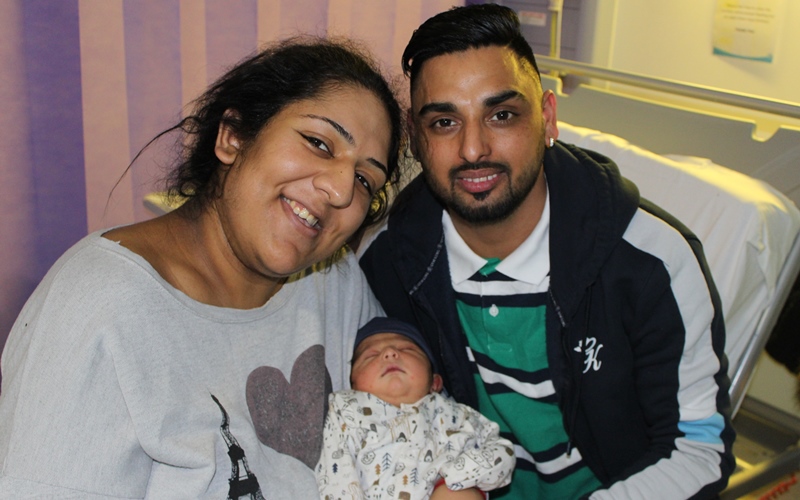 He was the first baby born in 2020, marking a new decade as well as a new year, at Queen’s Hospital.

Anshvir had been due to be born on his dad’s 31st birthday, 30 December, instead making his entrance by c-section two days later after Karishma was induced on her due date.

The 26-year-old said: “It was really special to have him on New Year’s Day, and that he was the first baby of the decade born at Queen’s Hospital. He’s our first baby and it was the best feeling in the world.”

New Year’s Day was a busy day for births at the hospital, with 23 babies coming into the world, topping the 17 who were born the week before on Christmas Day.

Among those born on Christmas Day was baby Ocean, the first baby for parents Nicola O’Neil and Chris Manangu, of Auriel Avenue, Dagenham.

She was born just after 2pm in the afternoon after Nicola went in labour on Christmas Eve. Baby Ocean came on her due date, so her parents had some time to get used to her most likely being a Christmas Day baby.

Nicola said: “At first we thought poor girl, to have her birthday on Christmas Day, then we realised it was really special.

“It felt surreal giving birth on Christmas Day, but it was nice and my midwife was amazing. Everyone was in really good spirits. We went home on Boxing Day and opened our presents then. It’s been crazy.”

Raisa and Oscar Kolodziej, of Dagenham, welcomed their second child, son Luis, just 44 minutes into Christmas Day after he came a few days after his 22 December due date.

Oscar, 37, said: “He was a nice present and our daughter Tatiana is really excited to be a big sister.”

Kelly and Ryan Gull, of Hornchurch, also welcomed their second child, Arabella, who came three weeks early, just after 4.30am on Christmas Day.

Kelly, 32, said: “It was a bit of a shock when my waters broke on the 23rd as she wasn’t due until 12 January. We whisked our elder daughter, Lucia, three, to her grandparents and went to hospital. I was induced on Christmas morning and she came after a two and a half hour labour.

“We were a bit sad at first to miss Christmas morning with Lucia, but it was really nice in the hospital and I was given a present. It felt really festive and they made a big fuss of me. We got to go home at 4pm on Christmas Day so we had the evening to open our presents and spoil Lucia while the baby slept. We had Christmas dinner on Boxing Day.”

Lacy Argent, of Harold Hill, also welcomed her first baby with partner Reece Ishmail, Maddie-Mae at 2.53am, days ahead of her 5 January due date.

Lacy said: “It was a close call that she was a Christmas Day baby as the midwife said it was touch and go whether she would come before midnight.

“Everyone got really excited about her being born on Christmas Day so it ended up being really special.”

Lacy, 27, and Reece 28, also each have a child from previous relationships.