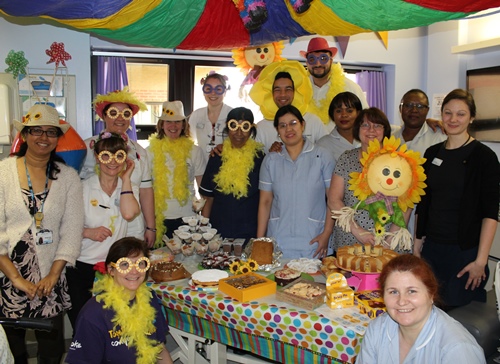 A Bring Me Sunshine party has been held at King George Hospital to raise funds for the Stroke Association.

The colourful party was organised by staff on Beech Ward, which specialises in rehabilitation for patients who have had a stroke. They managed to raise more than £200.

Kathy Mason, Senior Sister, said: “We were really pleased we raised the money, and even more so that our patients and their families had fun.

“The staff really got involved with the decorations, even wearing paper sunglasses and flower garlands – so it was a really great time for all of us.”

Guests enjoyed cake decorating and a raffle was held. Refreshments included a range of cakes, some which were homemade by staff at Barking, Havering and Redbridge University Hospitals NHS Trust.

Families were also invited to attend. Among them was Jill Hill, whose husband Kenneth is a patient on the ward.

She said: “We’re here every day as a family with Ken, and it was really nice that this party was held on the ward.”

Bring Me Sunshine parties are held throughout February to raise money for the association, to bring some sunshine to stroke patients during the dark winter months.