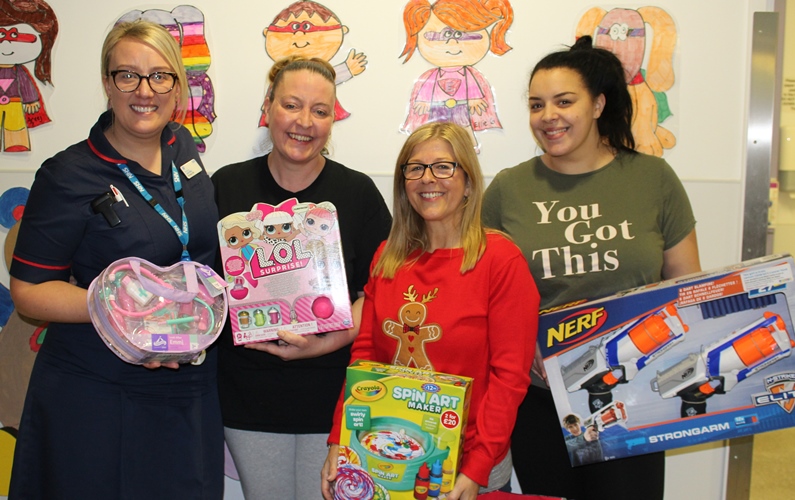 Lisa and Dave Bennett, whose son Micky, 12, died of leukemia in April this year, visited Queen’s Hospital this week (Friday 20 December) to deliver presents in his memory.

They were inspired after Micky himself raised £5,000 to buy presents for children in hospital last Christmas, despite being in isolation himself at Great Ormond Street Hospital (GOSH) at the time.

Mum Lisa, 41, said: “It felt right for us to complete Micky’s wish list and deliver smiles to children in hospital over Christmas. It’s also helped to keep us sane.

“I’ve been involved with charities all my life and my kids have got into it too. All Mickey wanted to do was to make other people happy. Although he sounds like an angel, he was a cheeky chap too. Even when he was dying he was making jokes at his nurses’ expense. Everyone loved him, he was an old soul.”

In early November, Lisa and Dave, who are originally from Dagenham and currently live in Basildon, teamed up with the Lennox Children’s Cancer Fund, raising £9,000 in just weeks. The money has been spent on buying presents for hundreds of children, including those at our hospital and GOSH.

Lisa was also full of praise for Laura May, our children’s oncology clinical nurse specialist (CNS), for her support to the family, which even included cancelling her birthday plans to be with them after Micky died.

She added: “I’ve loved doing it, especially here as the staff go above and beyond. I wouldn’t have got through it without them. Laura came in on her birthday and helped me during the worst bit of my life, now she’s like family. They were all brilliant here.”

During her visit to the hospital, Lisa, also mum to Chantelle, 24, Kharis, 19, and 18-year-old Rosslyn, fondly remembered Micky’s cheekiness, after one of his last wishes was to get a family dog.

She said: “He knew I always wanted a dog and was going to get one when all my children left home. So, when he knew he was dying, he insisted we got a dog, a British Bulldog he named Boss Bennett.

“I thought a bulldog would be a good dog, but he’s just as cheeky as Micky was. I think he knew what he was doing – he got us a dog that’s turned out to be a right character!”

Lisa and Dave are also planning to set up a foundation in Micky’s memory.