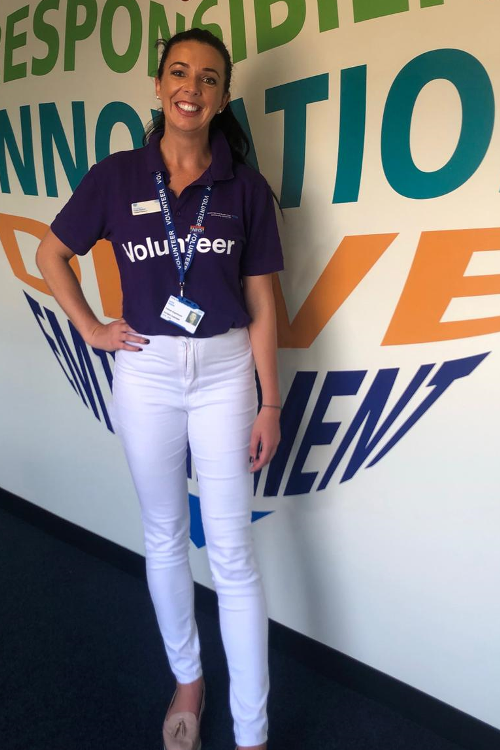 Kate Baker, who was treated for a benign brain tumour at Queen’s Hospital in December 2016, has applied to be a healthcare assistant – after being inspired by the care she received when she was a patient.

She said: “My heart was really drawn to being a healthcare assistant. It’s something I haven’t done before because nursing was never something I thought I could do. However, I’m caring and compassionate so I thought - no, I can do this! After all, staff at the hospital cared for me, so I wanted to give something back.

“It is something that is out of my comfort zone, usually I am in high heels so I will be switching them for comfortable flats! I am going to give it my best shot, because it was the nursing which really made a difference to me while I was a patient on Sahara B ward.”

Kate, who lives in Colchester, decided to apply after seeing our recent recruitment campaign for temporary staff to help care for our patients during the Covid-19 pandemic.

As she works in sales, Kate originally planned to apply for a admin role, however, when she found those had been filled, she was inspired to try something different after remembering a HCA who made a difference to her.

She added: “During my time as a patient, one of the healthcare assistants who really stood out was Victoria. It was December and Victoria absolutely loved Christmas and she would always come in singing to the Christmas songs on the radio!

“The woman in the bed opposite me was a mum in her 40s and she was very unwell. I watched the way Victoria spoke to her and held her hand and I just thought – ‘wow, she is such a lovely person who I would love to be like’. I know the woman’s family were really grateful to her. Now, Victoria is a qualified nurse after having completed her training!

“The role is so much about helping people, and being there for people at one of the worst moments in their life. Particularly at the moment where most visitors are not allowed into the hospitals, I want to be there for patients in the way NHS staff were there for me while I was a patient.”

Kate was so grateful for the care she received during her time with us that to give something back, she became a volunteer patient partner, a role which aims to improve services by giving the patient perspective.

With volunteering stood down to keep everyone safe at our hospitals during the pandemic, Kate wanted to take on a temporary role to continue to help.

She added: “My son, Max, is five and is really proud of me; he’s a big fan of the NHS! He’s been going to Easter camp telling his friends I’m going to be a nurse – some of the staff said they didn’t know I was a nurse, and neither did I! I’ve explained to him that the role is an auxiliary nurse now.”

Following the recruitment campaign, hundreds of people have applied for roles at our hospitals. So far, roles have already been offered to 48 healthcare assistants, two nurses and 13 doctors!