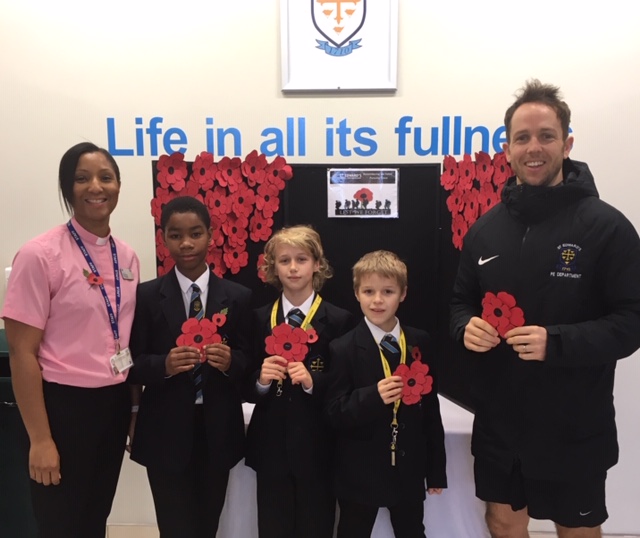 Grace Allick, a chaplain at our Trust, has worked with pupils at St Edward’s Academy to create two walls of poppies which will be a backdrop to remembrance services at Queen’s and King George hospitals.

As well as her role at our Trust, Grace is also a volunteer chaplain at the Romford school. She had the idea to create a wall of poppies as part of sessions she led on the importance of remembrance.

She said: “I wanted to get them thinking about the impact on their lives and what it meant for them. The youngest soldier found on the battlefield in World War One was just 12 and, given that’s so close in age to them, it really brought it home.

“So they’ve created their own poppies, put their name and age on them along with their message to a soldier. These have been used to create two walls of poppies which will be the backdrop for remembrance services at both our hospitals on Monday 11 November.”

Groups of pupils from years seven and ten have been involved in each creating their own wall of poppies which will take centre stage at next week’s remembrance services. There will also be blank poppies for staff, patients and visitors who attend to write their own message.

Pictured is Grace with pupils Hasani Allick, Caleb Judd and Nathanael Judd, alongside Mr Norley, Head of Year Seven, in front of one of the walls of poppies.