Volunteer Janne shares how she felt about coming back to volunteering, and how she has been supporting our staff and patients in our new ‘Green Zone’. 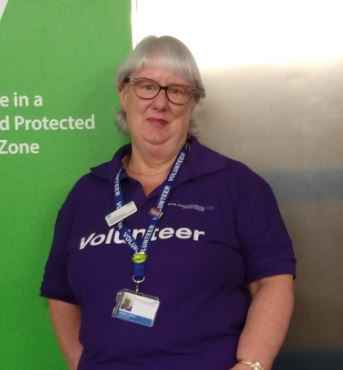 “Hello my name is Janne Cassidy and I have been volunteering at our Trust since February 2017. At the start I worked with the Bereavement Team before moving, a few months later, to become the first volunteer to help out in the Outpatients Team (OPD).

I worked there every Monday and Wednesday and I thoroughly enjoyed being part of such a busy team and also helping other volunteers who joined after me. So, when I received an email in March to say that because of Covid-19 all volunteers were being suspended, I was disappointed, although I understood the reason.

During lockdown, I missed doing my bit to support the team and the patients, although of course, very quickly, no Outpatient clinics were being held.

I was very pleased when I received an email to say that elective surgery would resume at King George Hospital (KGH) and there was an opportunity to volunteer in the newly designated green zone. My first thought was YES, I want to be part of this! I arrived for my first afternoon shift in the middle of June. We had been told that once we walked through the door of the green zone we couldn’t leave until the end of our shift, because if we did - and entered any other part of the hospital - we wouldn’t be able to return.  We were advised to bring a packed lunch and plenty of water.

Being in the green zone meant I was meeting and greeting patients who had been unsure when they would have their surgery and who had self-isolated for fourteen days. I tried to reassure those who were nervous and, hopefully, I put them at their ease before their appointment began.

I have been impressed with the way our Trust has resumed surgeries in such a short turn around and I have been really pleased to be part of the green zone.

Now that volunteers are returning to our hospitals I am looking forward to going back to Queen’s OPD.

I would encourage my colleagues to think about filling the shift I have left vacant in the green zone as I found it rewarding to work there.”