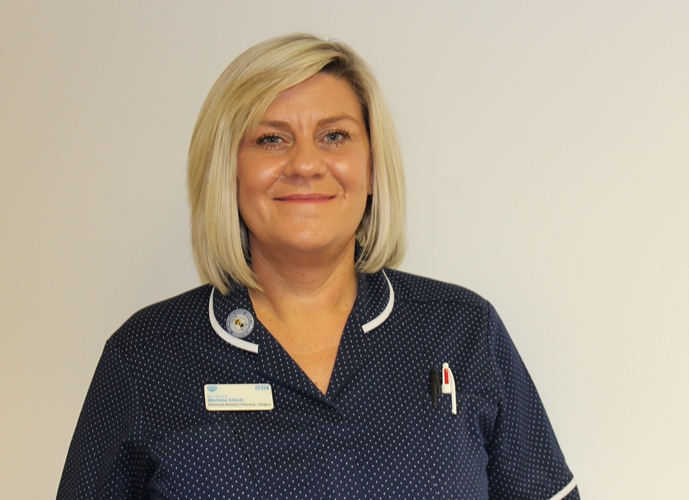 Our nurse Michele Elliot (pictured) has received an MBE in the delayed Queen’s Birthday Honours, recognising her work during the Covid-19 pandemic.

As divisional director of nursing for emergency care and anaesthetics, Michele was instrumental in ensuring there were enough critical care beds, equipment and staff to care for seriously ill patients during the pandemic.

She said: “Before Covid-19 hit there was a lot of anxiety as we knew it was coming but didn’t know exactly how it would impact us. It took a lot of planning and was quite difficult.

“So many people worked so hard, and I couldn’t have done it without everyone else so I feel this is for all of us. I’ve worked during major incidents before and they usually last between 24 to 72 hours, so the adrenaline gets you through. Covid was much harder as it’s been over a long period. It has brought us together as we all have something in common. It’s been stressful for everyone in different ways.”

During her career Michele, who trained at our Trust, returning two years ago after working in hospitals including the Royal London and St Mary’s, treated patients from the London Bridge terror attack in 2017. She even appeared on the Hospital TV series, as the injured terrorist was brought in for treatment.

She was also on shift when the Grenfell Tower fire took place that same year: “That was really different to the terrorists attack, we had people pouring into the hospital with pictures of their loved ones. What made it even more difficult was given where the hospital was based, many of the staff had family and friends who lived there.

“It was emotionally challenging for a lot of people.”

Mum-of-two Michele started her nursing career at 28, after returning from seven years living in the US with her young daughter in tow, and feeling like she needed to get a ‘grown-up job’.

Her mum was a healthcare assistant (HCA) so Michele spent her childhood surrounded by healthcare workers and hearing their stories, however, as she didn’t do well at school she didn’t think nursing was the career for her.

Luckily, she passed the test to start her training: “I’d been working in a care home as a HCA, to check I could cope with the less glamorous aspects of nursing.

“I loved it. I really enjoy being around people and caring for them. When people need care, it’s an important time in their lives and I think it’s a privilege to be part of that.”

Michele, of King Edward Avenue, Rainham, has also had the opportunity to volunteer abroad. In 2014 she went to Gaza, post-ceasefire, to care for those in need, and in 2015, she went to Nepal following an earthquake which killed thousands and injured thousands more.

She added: “I enjoy helping in these circumstance and find that, like during major incidents, the adrenaline gets you through.

“I was working on a spinal injury rehab unit in Nepal and we had a little girl who had broken her back. One day I went out and got some nail varnish so I could polish her nails to cheer her up, before I knew it, the entire ward had pink nails! What I really enjoyed while volunteering was giving hands-on care again, as a change from managing teams in my usual role. I’ve been extremely lucky with the opportunities I’ve had in my career.”