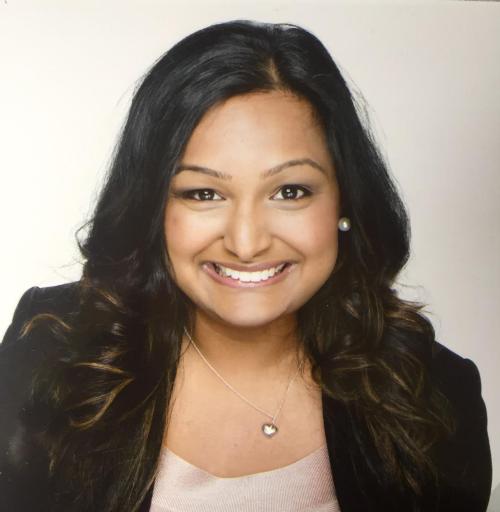 Margaret Mann, 85, had been on her way from her home in Plaistow to visit her sister-in-law, Judy, at King George Hospital, when she fell over at Upton Park Station, breaking her arm in two places.

Sadly, she then received a call from our doctor, Nirooshi Nagarajah (pictured), who was caring for Judy, to say that she was near the end of her life and Margaret should come to see her.

At the time, Margaret was being helped by passers-by, one of whom happened to be a doctor, Kavya Pillai, who was on her way home from a night shift at King’s College Hospital. Both doctors spoke over the phone and agreed the best course of action would be to get Margaret to King George Hospital in a cab, where she could be looked over before seeing Judy.

Margaret said: “I was in a lot of pain and as soon as I got there they x-rayed it and put my arm in a sling. It was broken in two places.

“Once it was supported I was able to go an see Judy on the ward. The whole hospital team were so kind to her, they made her so comfortable and when I went to see her, she was so peaceful. She opened her eyes and looked at me and I asked if she was okay, she said yes. I spent a long time with her and they called me later that day to say that she had died. Given everything that happened, it was like a miracle – especially that when I was in pain at the station a doctor came along.”

Judy, who had a range of physical and mental health issues, had been married to Margaret’s brother Oliver, who died last December. His ashes will be buried with Judy, who died in March.

After seeing Judy, Margaret, who has sons Tony and Paul, was referred to Queen’s Hospital where further investigations into her arm were made. It was decided not to operate and her arm was kept supported in a sling while it healed. She’s due to start physiotherapy to continue her recovery soon.

She added: “I’m a very active person so I’m glad it’s on the mend now, the pain at the time was so bad it was like torture.

“I’m very grateful for how the hospital staff looked after me – I couldn’t pick anything up when I first arrived and they made me a cup of tea. And how they cared for Judy was like nothing I’ve ever seen before. It was her time and I’m glad she was so peaceful.”

Nirooshi said: “It was awful for Margaret to break her arm on her way to our hospital, so we wanted to do everything we could to make her comfortable so she could spend some precious time with Judy in the hours before she died. It’s lovely to hear how much it meant to her, and that her arm appears to now be on the mend.”

Kavya added: “I’m glad to hear Margaret is doing okay, it was a real team effort looking after her at the station. The TfL staff helped me organise some of the logistics, as well as getting Margaret a nice cup of strong tea to help keep her warm.

“There were also some lovely members of the public who help catch her when she fell and stayed with her to comfort her.”